Last year there was en immense glut of hedge mustard. Everywhere you looked there were enormous amounts of these delightful flowering plants.

This year there were hardly any.

Last year, the grassy bank at the side of the road juyst before you reach Asda on the outskirts of Bideford was lilac in colour because of the profusion of the flowers. 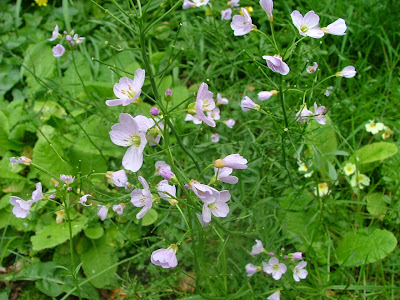 This year there were none there at all.

The only place where there is more of these plants than there were last year is in our garden, and I have no idea how they got here in the first place. Last year, for the first time there was one solitary flower spike just a few yards away from my study window.

This year there are about eight. 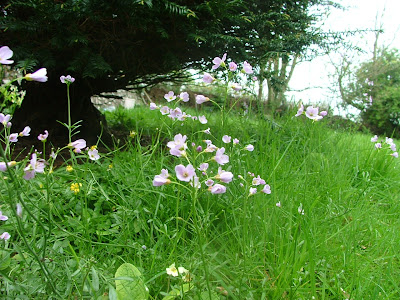 The thing that really confuses me is that last year there was an equally spectacular glut of orange tip butterflies. This year there are hardly any - I have seen about four.

The wild flowers on the whole have not been very good this year so far, and I am wondering whether it has been because of the spectacularly mild winter that we have had. Do the plants need to have the biological trigger of frozen ground in order to do well?

But why have they done so well in our garden?

This year we had no snow or ice at all until February, and when it did come it killed most of the frogspawn. Was it also too late for the flowers? And did the mild weather fail to kill off the parasites that prey on the hibernating caterpilars and chyrysalides?

Ewood Park was all of a flutter when a chicken bearing the slogan 'Kean Out' on a placard was sent onto the pitch during a match between Blackburn Rovers and away team Wigan FC. Fans released the chicken during the football match on Monday to register their dismay at likely relegation - which WAS the outcome of the match. The fowl, which also sported a Rovers scarf (in some reports, a flag), was intended to be a dig at the club's owners, Venky's, an Indian poultry company.
Posted by C-E B at 2:00 PM No comments:

The weekend starts here. (Well, no, actually it started about fifteen hours ago, but we overslept). Saturday morning dawns bright and clear (for which, read grey and muggy) here at Gonzo Daily HQ, but we have all sorts of nice things for you.

My postbag is again an interesting one with a Bob Dylan book and Grateful Dead DVD having arrived for my perusal.
http://gonzo-multimedia.blogspot.co.uk/2012/05/todays-postbag_19.html

We start off the postings proper with a real exclusive. Part Two of the interview with Ant-Bee mainman Billy James, who talks (amongst other things) about his work with Jon Anderson, and the recording of Anderson's latest opus:
http://gonzo-multimedia.blogspot.com/2012/05/exclusive-ant-bee-interview-part-two.html

We have Judge Smith being interviewed on a Dutch radio station. And, yes, you can download the MP3:
http://gonzo-multimedia.blogspot.com/2012/05/judge-smith-dutch-radio-interview.html

Acting on a tip from one of Britain's most popular UFO authors, we take a look at Michael Des Barres' chequered past:
http://gonzo-multimedia.blogspot.com/2012/05/michael-des-barres-chequered-past.html

We have a link to a jolly good review of the latest Martin Stephenson album:
http://gonzo-multimedia.blogspot.com/2012/05/martin-stephenson-review.html

And finally, if our sources are correct (and haven't just made the whole thing up) Hawkwind are doing the weirdest celebrity endorsement of which we have ever heard:
http://gonzo-multimedia.blogspot.com/2012/05/hawkwindendorse-south-norwood-tourist.html

See you tomorrow (which being sunday means that the whole thing will be in bad rhyme)
Posted by Jon Downes at 1:49 PM No comments:

On this day in 1536 Anne Boleyn was executed. Her ghost is said to haunt the Tower of London.

Posted by Jon Downes at 1:49 PM No comments: