And so the weekend is over, and we have bought a new tumble dryer on eBay. Not that this piece of news has any relationship whatsoever with the rest of the contents of the Gonzo Daily, but I just felt like sharing it. Whilst on the subject of appliances, I recently wrote a song about washing machines. I was influenced by various rap songs about major criminals doing nasty things to each other. Like the one quoted in a 'Preacher' Comic:

"I knew a crack dealer, his name was Peter
I blew him away with my nine millimetre"

So I wrote a song about a mate of mine called Ian who once (30 years ago in his mis-spent youth) stole a vanload of second-hand washing machines when he was drunk, only to find out that none of them worked properly.

It had to be done.

But I digress (although it IS monday). Today's posts are many and varied.

A rather charming Polish review of the new live CD/DVD from Chris Thompson. I have left the text completely unedited to retain that aforementioned charm...
http://gonzo-multimedia.blogspot.com/2012/06/chris-thompson-polish-review_24.html

Is there any concievable excuse we can think of which would get me to buy one of these and charge it as expenses? I sooooo want one!
http://gonzo-multimedia.blogspot.com/2012/06/bigfoot-guitar-finally-mixing-my-day.html

Gail Skelly is an unsigned folk singer. Rob met her the other day, and we decided to feature her on the Gonzo Daily. Why? Because we can.
http://gonzo-multimedia.blogspot.com/2012/06/introducing-gail-skelly.html

What? Another part of the exclusive interview with Wally and Jackson Webber mainman Roy Webber? Mr Ambassador, you are spoiling us...
http://gonzo-multimedia.blogspot.com/2012/06/exclusive-roy-webber-jackson-webber_25.html

Journalists have got a bad press lately. They have been maligned as low life scum who will stoop to anything to get a story. But what sort of low-life scum would stoop to stealing pictures from a girl's Facebook page. Well, me actually. There are some very cool pics of Mimi Page on stage at the Lightning in a Bottle Festival. They were on her page, now they are here. Capisce?
http://gonzo-multimedia.blogspot.com/2012/06/mimi-page-lightning-in-bottle-festival.html

As regular readers will probably know, for some reason not entirely understood by me (although it was me who started it) when I send out the blog notifications each sunday, I do them in rhyme.And Liz L, chanteuse of Auburn, quite often answers me in the same style...
http://gonzo-multimedia.blogspot.com/2012/06/here-comes-rhyming-liz.html

A sneak preview of the title track of the new Michael Des Barres CD, which you may have read me wittering on about sometimes. It really is bloody excellent.
http://gonzo-multimedia.blogspot.com/2012/06/michael-des-barres-get-sneak-preview-of.html

We will be back tomorrow,
toodle-oooh
Posted by Jon Downes at 2:18 PM No comments:

On this day in 1981 William O'Neil, allegedly, received his first successful communication on his invention the 'spiricom'. This was supposedly an electronic device that would allow verbal real-time evp communication between the living and the dead. Despite his free distribution of plans enabling people to make their own spiricoms nobody has been able to replicate his results, which may or may not be due to the distributed plans not involving a person sitting inside the machine with a microphone and a voice modulater that makes them sound like Sparky's Magic Piano, or maybe I'm just being cynical.


What the spiricom sounded like (the spirits are with us at around the three and a half minute mark) :

INTERESTING ARTICLE ABOUT THE MAPINGUARI

Email ThisBlogThis!Share to TwitterShare to FacebookShare to Pinterest
Labels: mapinguari

Nessie is used in the ACE teaching materials as proof that Darwin's evolution theory is false
Custom byline text:
EXCLUSIVE by Rachel Loxton
Thousands of children in the southern state will receive publicly-funded vouchers for the next school year to attend private schools where Scotland's most famous mythological beast will be taught as a real living creature.
These private schools follow a fundamentalist curriculum including the Accelerated Christian Education (ACE) programme to teach controversial religious beliefs aimed at disproving evolution and proving creationism.
One tenet has it that if it can be proved that dinosaurs walked the earth at the same time as man then Darwinism is fatally flawed.
Read on...
Posted by Jon Downes at 11:19 AM 2 comments: 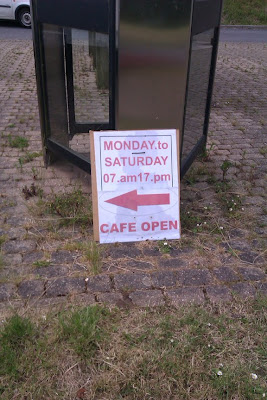 Posted by Jon Downes at 9:21 AM No comments: