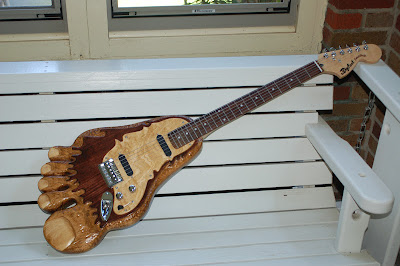 Well, folks, here's 'Bigfoot', and it ain't Sasquatch . . . it's a real honest-to-gawd hand carved six string solid body guitar complete with all the necessary hardware and design to make it playable. And, it's fulfilled every expectation I had in the design and execution process.

CFZ CANADA: Faeries at the bottom of the garden

Faeries, or fairies, may be more than fanciful products of fiction. In fact, faeries seem to have a real (if murky) foundation in fact, and have been feared for centuries.

Good Morning, campers. It is a slightly chilly summer's day outside, and it is also the weekend when once a year we open the gardens to the general public as part of the national 'Open Gardens' scheme. So it will be quite busy.

Today's Gonzified Delights (memo to self: suggest that Rob opens a chain of confectioners selling these) starts off with news of a lavish 4 CD set by Jefferson Starship:
http://gonzo-multimedia.blogspot.com/2012/06/jefferson-starship-what-brilliant.html

I really like Scoop-it. It is a new utility whereby you can present news items and other stuff as a rather swish-looking online magazine. You can cop a sneak preview of the Gonzo Daily Scoop-it at http://www.scoop.it/t/the-gonzo-daily . However, I have also done one for Michael Des Barres, and as an experiment I have decided to make the embed code available so that you can embed his scoop-it on your own blog or webpage.
http://gonzo-multimedia.blogspot.com/2012/06/michael-des-barres-on-scoop-it.html

Talking to the lovely Helen McCookerybook the other day made me take a trip down memory lane into my own punky past, when I was a spiky-haired young herbert. Then I found this recent BBC documentary and I immediately decided to share it with the lovely readers here at the Gonzo Daily...
http://gonzo-multimedia.blogspot.com/2012/06/punk-britannia-thanks-helen.html

My Postbag. It is a fine state of affairs when a picture of a fat hippy making silly faces whilst clutching a handful of CDs and books passes for news. Shame on everyone involved. Tut! http://gonzo-multimedia.blogspot.com/2012/06/my-postbag-from-last-week.html

Today, sadly, we come to the final part of my long and rambling chat with the lovely and multi-talented Helen McCookerybook. It was supposed to be about the rather lovely CD she has made with Daintees frontman Martin Stephenson. It is called Cafe of Tiny Kindnesses and it is one of the most delicate and beautiful things that I have heard in yonks.But the conversation didn't end up like that at all. We spent a long time discussing our shared background in the DIY Punk scene of the late 70s and early 80s.
http://gonzo-multimedia.blogspot.com/2012/06/tony-hawks-charity-gala-so-rob-is-in.html

Gonzo impresario Rob Ayling was out in central London in his suit the other night. Now that's either pretty scary (it was) or he was doing something important. Indeed it was just that. He attended the star-studded (including some of his childhood heroes The Goodies, Tim Brooke Taylor and Dr Graham Garden) glitzy Leicester Square premier of Tony Hawks film Playing the Moldovians at Tennis. Not only is it a great film, it also helps raise money for a specialist medical unit in Moldova:
http://gonzo-multimedia.blogspot.com/2012/06/tony-hawks-charity-gala-so-rob-is-in.html

And that's it for today. I will be back tomorrow IN RHYME!

Slainte
Posted by Jon Downes at 1:16 PM No comments:

http://cryptozoologynews.blogspot.com/
On this day in 1912 Alan Turing was born. Turing created the worlds first electrical computer during World War 2 in a successful effort to break Germany's complex enigma code. He killed himself aged 41 by eating an apple he had poisoned with cyanide, possibly due to the results of a chemical castration on his mental health.
And now the news:
The sad fate of Turing and Gordon Brown's apology on behalf of the British Government:
http://www.youtube.com/watch?v=CES_FxLp08Y
Posted by Jon Downes at 1:15 PM No comments:

SHUKERNATURE: NESSIE AND THE NEWSPAPER CARTOON – IN SEARCH OF ITS SOURCE

The very considerable cryptozoological archives that I have amassed over many years of research began long ago with a series of humble little scrapbooks of interesting animal-related newspaper cuttings and magazine articles that I compiled as a child. Sadly, my enthusiasm for collecting and preserving these items was not matched at that tender age with the realisation that to render them of scientific worth I should also always note down their source and date of publication. Happily, I have since been able to trace the relevant details for many of them, but not all... Read on...
Posted by Jon Downes at 11:24 AM No comments: 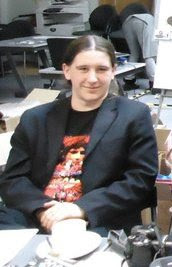 We are happy and proud to announce that this morning Max got his degree - a 2:1 in Zoology. He now goes on to do his doctorate. Well done dear boy. We are very proud of you.
Posted by Jon Downes at 9:20 AM 5 comments: 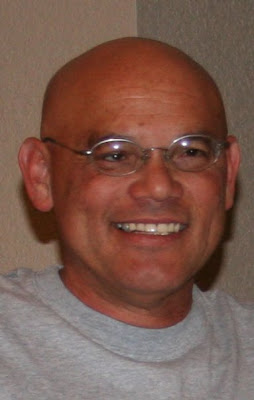 Happy Birthday dude...
Posted by Jon Downes at 9:18 AM No comments: