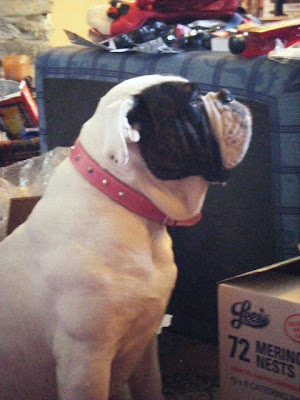 Olivia bought Prudence a new collar - pink designer studded leather. It makes Pru look stylish, svelte and ever so slightly menacing. A bit like my youngest step-daughter, then....

(Top Picture) Prudence models her new collar
(Bottom picture) And at the end of the day, three tired ones rest.... 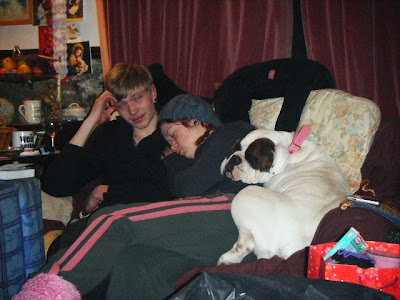 LOOK WHAT CORINNA FOUND IN THE GARDEN 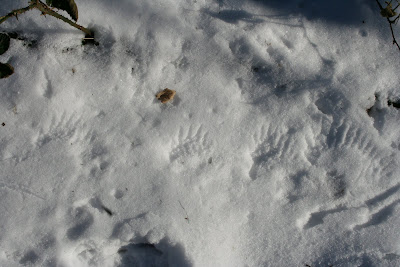 Unless we are very much mistaken, it is a badger! There used to be badgers visiting the garden about 20 years ago, but they played havoc with the lawn, so my father erected an electric fence to keep them out. I think that I prefer badgers to lawns....
Posted by Jon Downes at 9:55 AM No comments:

Yesterday, Rick from the Paranormal and ghost society spent Christmas Day in Death Valley, Ca. And furthermore he was dressed as Santa Claus.

Can you beat that for a weird way to have spent Christmas Day?
Posted by Jon Downes at 9:45 AM 2 comments:

My favourite record of the year bar none. The band go from strength to strength, and on this pleasantly understated record, the songwriting is stronger than ever...

2 The Divine Comedy: There goes the Knighthood

Neil Hannon is one of the best, and most consistent of our contemporary songwriters. He is by turns funny, poignant and sad, and I am a massive fan. That being said, I saw the band live about 12 years ago and they were horrid...

Bizarrely, the Beatle least likely to score on the credibility stakes has been making some smashing records since he qualified for his free bus pass. There are some really smashing moments on this record - and remember he turned 70 this year.

Basically does exactly what it says on the tin, but does it with lashings of aplomb and flair. The man is a true hero, and one of the few people in pop music for whom the overused word 'genius' is actually apt.

The third, and in many ways the best installment from the cartoon band, who now feature half of The Clash. This was the soundtrack for my springtime, and what a spring it was..

Posted by Jon Downes at 9:40 AM No comments:

MANY THANKS TO NEIL EDMOND..

..who sent us a Christmas present of $20 yesterday. Thank you very much mate. It will go towards heating the animals during this excrutiatingly hard winter..
Posted by Jon Downes at 9:38 AM No comments:

On this day in 2004 the third most powerful earthquake ever recorded occurred off the cost of Sumatra leading to the Indian Ocean Boxing Day Tsunami. The tsunami caused the death of over 230,000 people and is thought to be the fifth most deadly earthquake in history.
And now, the news:

How 'The Terminator' should have ended:
http://www.youtube.com/watch?v=bBBw9E2Q_aY
Posted by Jon Downes at 9:37 AM No comments: