CFZ NEW ZEALAND: How the Takahe made a Lazarus-like comeback

A 'Lazarus species' is one that is presumed to be extinct and then reappears.

One such example is the Takahē, thought to have died out by 1898.

The bird was rediscovered in 1948 by Dr. Geoffrey Orbell, who wrote this article, which was originally published in the December 10, 1948 edition of the Listener, and recently re-published on its website.

My interest in the notornis (takahē) began some 30 years ago. I was looking through some old photographs belonging to my mother – a keen amateur photographer – when I came upon a print of a bird in a glass case. My mother explained that it was a picture of the notornis specimen in the Otago Museum, that only four of the species had been found and that it was now supposed to be extinct. That word “supposed” stimulated my boyish sense of adventure, and I read all that I could find about the notornis. 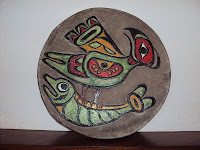 Posted by Andrew May at 1:54 PM No comments:

"Jon isn't well, he stayed back at the hotel", sing the Surrogate band. However, I am well enough to get out of bed and do the blogs but that is about all. I was particularly rubbish yesterday, and stayed in bed all day. Hopefully, I shall be up and about properly tomorrow. In the meantime I am afraid that OTT and other early january things will be postponed a few more days.

*  The Gonzo Daily is a two way process. If you have any news or want to write for us, please contact me at jon@eclipse.co.uk. If you are an artist and want to showcase your work, or even just say hello please write to me at gonzo@cfz.org.uk. Please copy, paste and spread the word about this magazine as widely as possible. We need people to read us in order to grow, and as soon as it is viable we shall be invading more traditional magaziney areas. Join in the fun, spread the word, and maybe if we all chant loud enough we CAN stop it raining. See you tomorrow...

*  The Gonzo Daily is - as the name implies - a daily online magazine (mostly) about artists connected to the Gonzo Multimedia group of companies. But it also has other stuff as and when the editor feels like it. The same team also do a weekly newsletter called - imaginatively - The Gonzo Weekly. Find out about it at this link: http://gonzo-multimedia.blogspot.com/2012/11/all-gonzo-news-wots-fit-to-print.html
*  Jon Downes, the Editor of all these ventures is an old hippy of 53 who - together with his orange cat - puts it all together from a converted potato shed in a tumbledown cottage deep in rural Devon which he shares with various fish and batrachians. He is ably assisted by his lovely wife Corinna, his bulldog/boxer Prudence, his mother-in-law, and a motley collection of social malcontents. Plus.. did we mention the orange cat?
Posted by Jon Downes at 11:46 AM No comments:

On this day in 2005 the discovery of the dwarf planet Eris was announced. This prompted the IAU to act like petulant UKIP voting baby boomers and redefine the meaning of the word planet so that it didn't apply to anything other than the nice big planets up to Neptune, otherwise they would have to learn a lot of new planet names due to the fact than several planets were being discovered of late thanks to better methods of detection and technology.