An Evening with Jonathan Downes

· Hosted by The Existence of Strange Things
;
InterestedGoing
Share
Posted by Jon Downes at 5:01 PM No comments:

Could Gene-Editing Technology Bring Back the Extinct Tasmanian Tiger?

Newsweek
With the stripes of a tiger, the body shape of a dog and the pouch of a kangaroo, the Australian thylacine was a unique combination of animals. Unfortunately, humans drove it to extinction, and the last one perished in 1936. However, as gene technology advances and the science of “de-extinction” ...

'Not science fiction any more': The Tasmanian tiger could soon be back from extinction
Herald Sun
Andrew Pask, a scientist from the University of Melbourne, was part of a team who worked for 10 years to discover all the genetic information of the thylacine. They did this with the help of a four-week-old thylacine joey that had been preserved in a liquid chemical when it died a long time ago. This joey is ...

'It's not science fiction, it's science fact': Australian scientists plan to CLONE the Tasmanian tiger ...
Daily Mail
'You would have to make a lot more changes to make the numbat DNA look like a thylacine but the technology for making those changes has gotten exponentially easier in the last five or so years because of the people who are doing the mammoth work,' Professor Pask said. The Tasmanian Tiger ...

THE GONZO BLOG DOO-DAH MAN GETS ON WITH IT 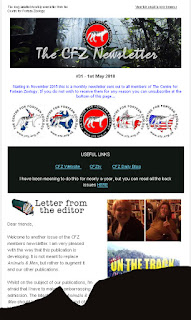 For those of you not in the know, at the beginning of each month we send out a newsletter to all members of the CFZ. The most recent (which went out a few minutes ago) included articles on OTT, mystery butterfly species, a plea for tolerance, a mystery shark, a "four legged snake", enormous mudpuppies,  Patreon, a new book on vampires, Notes and Queries etc
The infrastructure of the Centre for Fortean Zoology has changed rapidly over the last few years and truthfully doesn’t look like its going to stop changing anytime soon.

If you want to view a sample issue click here: http://tinyurl.com/pw7rw9l
Posted by Jon Downes at 4:30 AM No comments: