CRYPTOLINK: Sometimes mistaken for a "chupacabra" 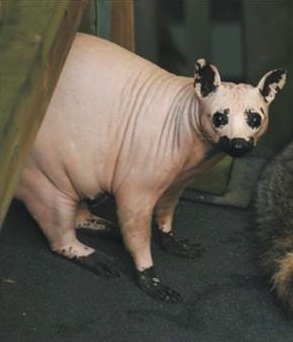 Photographed at a Toronto apartment complex.   You probably won't guess what it is without looking beneath the fold...

A mysterious sea creature with a set of sharp teeth washed up on a U.K. beach last week, prompting wide speculation as to what it could be—the wildest being a dinosaur or the Loch Ness Monster.
David Mackland was walking with his family on Easthaven beach north of St. Andrews on the east coast of Scotland when he came across the carcass of the menacing creature. He had no idea what he had stumbled upon.
“We were just walking on the beach to see what we could find and we came across this,” Mackland told the U.K. Evening Telegraph. “I would say it was 4 to 5 feet long and about a foot wide. It was pretty big.
“You could see the teeth straight away.

“I don’t know what it is. To be honest, I looks a bit like an eel … You don’t usually see stuff like that. You very rarely see fish on the beach. You sometimes see dead birds, but it is unusual to see that.”
Mackland said a big chunk had been taken out of it and that it must have been killed at sea before washing up on the beach. He took photos and set out to determine its identity.
Online speculation ran the gamut from the humorous—a relative of Nessie?—to the more logical. Pike, shark, eel, and ling were among the guesses. Stephen McKelvie of the St. Andrews Aquarium also weighed in on the matter.
Posted by Jon Downes at 12:31 PM No comments:

New from the Frontiers of Zoology:

THE GONZO BLOG DOO-DAH MAN IS NOT A MUSTELID

I was up late last night trying to finish OTT#69. It will, I hope, be out sometime later today. I am also preparing for my chat with the legendary Mick Abrahams tomorrow. I saw him live in Exeter way back when (1977) and am looking forward to speaking to him. Many thanks to Rick Wakeman for setting it up. The kittens (now christened 'The Terrible Twins' are rampaging around the house.  Lilith (the black one) registered her disapproval vocally then I rolled onto her during the night, but apart from her dignity being bruised she was unscathed. Frunobulax spent much of the night cuddled up to Prudence, who is beginning to get used to them even though she is usually scared of cats.

*  Jon Downes, the Editor of all these ventures (and several others) is an old hippy of 53 who - together with his orange cat (who is currently on sick leave in Staffordshire) and two very small kittens (one of whom is also orange) puts it all together from a converted potato shed in a tumbledown cottage deep in rural Devon which he shares with various fish, and sometimes a small Indian frog. He is ably assisted by his lovely wife Corinna, his bulldog/boxer Prudence, his elderly mother-in-law, and a motley collection of social malcontents. Plus.. did we mention the orange cat?
Posted by Jon Downes at 12:06 PM No comments:

On this day in 1981 a paper was published about a rare form of pneumonia that had affected 5 patients with apparently weakened immune systems. This was the first time that AIDS was documented.
And now the news:


Sometimes public health campaigns can be quite scaremongering, but that's really the only time they actually work:
http://www.youtube.com/watch?v=WT-RH_2gfog
Posted by Jon Downes at 12:05 PM No comments: