FESTIVE WITH LOPLOP (and Davey Curtis)

The critters have returned to my lava lamp. I reckon this one is definitely birdlike so I've called him Lop-Lop.

Regards and Merry Christmas my old friend to you and yours. 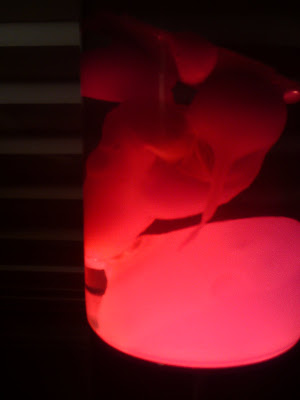 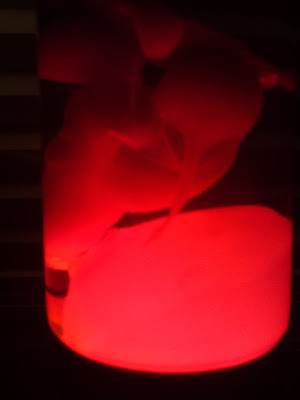 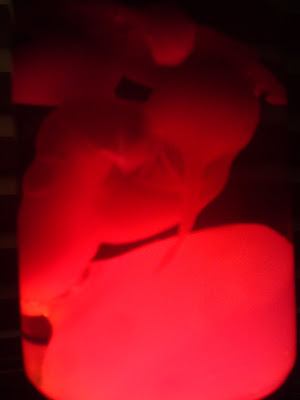 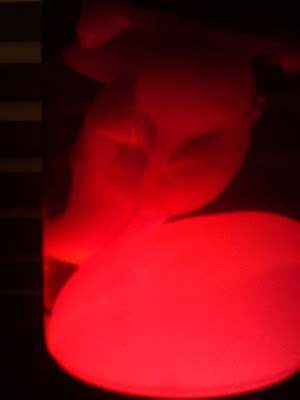 Dalmation has 15 puppies - double the average numb...
Polar bear cub raised by humans
Microbe thriving in Death Valley
Ancient Fungi-Plant Duo Discovered in Amber
Rapid evolution in domestic animals
Are coral reefs being dissolved by sea cucumbers?
Extinction may be on the cards for most of India's...

Bad day? Things will feel better when you’ve watched this clip:
http://www.youtube.com/watch?v=eqKzHSjQqnc
Posted by Jon Downes at 4:13 AM No comments:

WHAT A BRILLIANT JOB!

Primary duties include: general equipment maintenance, processing of wild caught animals (lizards and snakes), and clear communication with supervisor and other technicians regarding tasked duties. Following a thorough introduction and familiarization period (one-two weeks), technician must be capable of performing tasks independently. All work will be conducted out of a field station in Maljamar, NM. Daily schedule revolves around routine checking of pit(fall) traps in the deserts of southern New Mexico.

Qualifications: Minimum requirements: High School Diploma or GED with 2 years of coursework in the life sciences. Ideal candidate will: be in their last year of coursework leading to a B.S. in the life sciences (experience in herpetology is desired), have prior field experience, and most importantly, have a desire to conduct field biological work under harsh conditions.

Last Date to apply: Application review will begin on February 15, 2012.

Website: http://people.tamu.edu/~dlea886/Research.html
Posted by Jon Downes at 3:58 AM No comments:

Email ThisBlogThis!Share to TwitterShare to FacebookShare to Pinterest
Labels: vacancies

DALE DRINNON: The Alkali Lake Monster and Mark A. Hall's "Horrors" from the Mesozoic

New on the Frontiers of Zoology: The Alkali Lake Monster and Mark A. Hall's "Horrors" from the Mesozoic:
http://frontiersofzoology.blogspot.com/2011/12/alkali-lake-monster-and-halls-horrors.html
Posted by Jon Downes at 3:56 AM No comments: 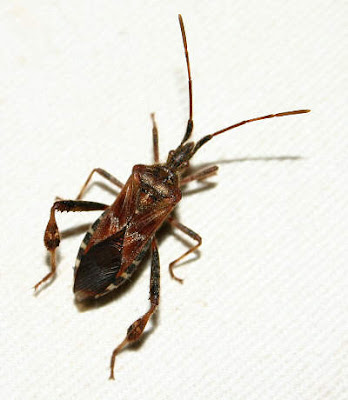 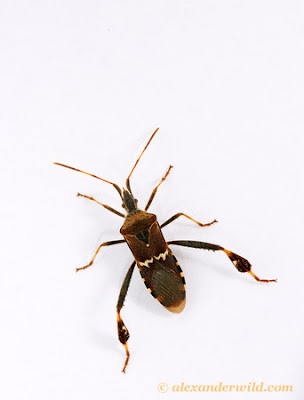 Posted by Jon Downes at 3:52 AM No comments:

DAVE B-P AND JESS H: The History of the Christmas Tree

A lot of classic folk stories have grown around the Christmas tree. Christ's blessing and gift to mankind in the form of a decorated tree remains in the middle theme of most households, across the world. Many, many years ago when Ronan Coghlan was a wee leanbh people used tree-based stories to teach children about the celebration of Christ's birth. A variety of conifers - such as spruce, balsam, eastern hemlock and the Scotch pine - are used as Christmas trees but the Scotch pine has surpassed the Douglas fir as the nation’s most popular Christmas tree. But in the Holy Land conifers are mostly small and insignificant, and forest few, apart from Lebanon with its magnificent cedars. Even in ancient times forested areas were small. How did the evergreen tree come to become associated with Christmas? Is it an appropriate symbol in Christian homes? Is it fixed in paganism or Christian symbolism? Is there significance to its decorations?

One classic tale tells us about a woodcutter who helps a small, hungry child. The next morning the child appears to the woodcutter and his wife, as the Christ-child. The child breaks a branch from a fir tree and tells the couple that it will be a tree that, at Christmas time, will bear fruit. As foretold, the next Christmas the tree was laden with apples of gold and nuts of silver.

Another legend tells that when Christianity first came to Northern Europe three virtues, faith, hope and charity, were sent from Heaven to find a tree that was as high as hope, as great as love, as sweet as charity, and had the sign of the cross on every bough. Their search ended in the forests of the north where they found the fir, lit from the luminosity of the stars, and that was the first Christmas tree.

Sacred trees in Europe, evergreens were a symbol of rebirth from ancient times. Egyptians brought green palm branches into their homes on the winter solstice as a symbol of life's triumph over death. The Romans decorated with evergreens during Saturnalia, a winter festival in honour of their god of agriculture. In northern Europe the pagans observed the Solstice festival of Jul, a two-month feast beginning in November with prickly pine branches hung around doorways and windows to keep away demonic spirits. But the sacred trees of the druids and Norsemen were deciduous oaks, not evergreen conifers.

The Paradise Tree - from the eleventh century, religious plays called "Mystery Plays" including the popular Paradise Play depicting the story of the creation of Adam and Eve, their sin and banishment from Eden. An evergreen tree was the logical choice for a lush garden tree on this winter festival, and it was decorated with apples symbolizing the forbidden fruit. It ended with the promise of the coming saviour and his incarnation, so gradually flat wafers symbolizing the forgiveness of sins in communion were added to the paradise tree, making it now not just the tree of knowledge but also the tree of life. This resulted in a very old European custom of decorating a fir tree in the home with apples and small white wafers representing the Holy Eucharist at Christmas time. These wafers were later replaced by little pieces of pastry cut in the shapes of stars, angels, hearts, flowers, and bells. In some areas the custom was still to hang the tree upside down.

In addition to the paradise tree, many German Christians set up a Christmas Pyramid called a Lichstock, an open wooden frame with shelves for figurines of the Nativity covered with evergreen branches and decorated with candy, pastry, candles and a star. The star of course was the star of Bethlehem, the candles represented the light of Christ coming into the world, the evergreens were the symbol of eternal life, and the candy, fruits, and pastries, the goodness of our life in Christ, the fruits of the spirit, etc. By the seventeenth century the Lichstock and the "Paradise Tree" became merged into the modern Christmas tree.

Modern Christmas Trees - Christmas trees became fashionable in the mid-1800s. In 1846 the popular royals Queen Victoria and her German prince, Albert, were illustrated in the London News with their children around a Christmas Tree. In America the White House led the way to trees for the holidays beginning with President Franklin Pierce. Despite some congregations' concerns about bringing trees into their religious traditions, trees quickly were adopted as symbols of Christ's Advent.

Thanks for reading, Merry Christmas, everyone and have a Happy New Year
Posted by Jon Downes at 3:49 AM No comments: