A TEN FOOT BIGFOOT SKELETON...OH MY

Ceramic-art shows at Bellevue Arts Museum and Seattle's Henry Art Gallery spearhead a huge wave of ceramic-art exhibits coming to the Seattle area, thanks to the National Council on Education for the Ceramic Arts (NCECA), which is holding its 46th annual conference in Seattle.

http://seattletimes.nwsource.com/html/thearts/2017630647_ar04ceramics.html?prmid=head_main
Posted by Jon Downes at 9:26 PM No comments:

http://www.environmentalgraffiti.com/urban-exploration/news-7-eerie-abandoned-zoos
Posted by Jon Downes at 5:34 AM No comments:

RICHARD FREEMAN: Fascinating new evidence proving that the deathworm is in fact used as a primary foodsource for humans 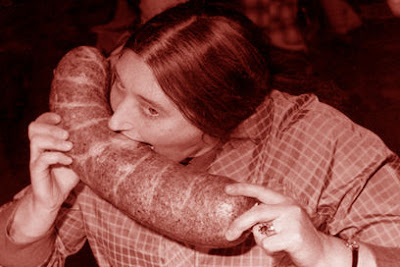 This article appeared on Wildlife Extra the other day (the headline is mine):

"March 2011. Donald Trump's boys have returned from a hunting safari in Zimbabwe. The Trump boys photos have appeared on the Hunting Legends website posing next to some of the animals that they have shot. The photos make my stomach turn, but one outrages me in particular.

One photo (On the right - Click here to see the Youtube video) shows Donald Trump Junior holding the tail of an elephant and a large knife. He is standing next to the carcass of an elephant that has a rifle leaning against it. We don't know whether he shot the elephant or not, or whether he cut the tail off himself, but that is clearly the impression the photo is meant to give. "

On this day in 1977 James Elliot, Edward Dunham and Douglas Mink discovered rings around Uranus.

Rare monkeys in China to be protected
Carp Dominate Crayfish in Invasive Species Battleg...
A Bird's Song May Teach Us About Human Speech Diso...
Pioneering project aims to restore rare plants on ...
Antarctic Blue Whale Set to Make Big Comeback
Project to protect rare Burmese monkey gets new fu...
Cheetah struggling to reproduce due to climate cha...
Final 100 ruddy ducks in the UK facing exterminati...
‘Catastrophic’ leak kills a thousand fish
What Have We Got in Common With a Gorilla? Insight...
'Frog conference' tackles toad and frog road threa...

In honour of today’s "On This Day":