THE WITCH IS APPARENTLY DEAD

Sunday’s work began slightly later than usual for me, as all Sunday work should, when not abolished altogether. I didn’t need to do the animal rounds, though there was still some observation of fish feeding.

The majority of the day, approximately nine hours solid, consisted of type-setting the Eberhart book. “D” and “G” were the two largest sections, so were naturally delegated to me. (Cheeky Little Ratbag JD) We got some way through “I” before putting this task to bed for the night.

This was followed by a two and a half hour lecture on cryptozoology. This included the various types of mystery hominids (Orang-pendek, Yeti, Bigfoot and Almasty), which cryptids we think are most likely to exist and why, and the running abilities of different types of monitor lizards as a theoretical basis for the reports of Megalania.

After the lecture was concluded, the cat hunt was very short as there was very little petrol and nobody fancied walking home in the dead of night. A quick skip through the woods and I was back at my B&B. when I called the talk a “lecture”, it was as formal a lecture as one can have with a brew in one hand and a dog using the other as a pillow.
Posted by Jon Downes at 2:06 PM No comments:

THE LATEST ON THE SOUTH PARK BIG CAT 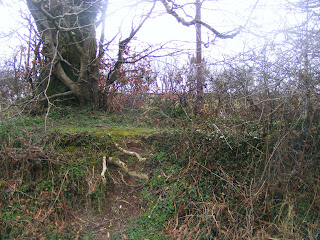 Ever since I started the Centre for Fortean Zoology 21 long years ago, I have always insisted that our watchword is not to either prove or disprove theories about mystery animals.  Our job is to find out the truth.  Because in the end, nothing else matters. 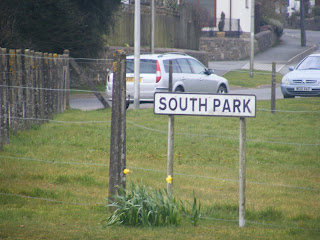 The week before last, whilst Danish zoologist Lars Thomas and his two sons were staying with us, Lars heard a remarkable story from a man in the village.  Lars was out walking by the community centre where we hold the Weird Weekend, on his first morning in the village, when a bloke in a small red car pulled up beside him, and asked whether he was anything to do with the Weird Weekend.  When he replied in the affirmative, the man told him that on the previous Sunday night he had seen what appeared to be a large cat walking along the road, the community centre to the small estate which always amuses my visitors when I tell have in mind that it is called South Park.

Lars went straight to the hedgerow where his new friend had reported seeing the mystery animal, and took some hair samples.  They went back to Denmark with him, and today he wrote to me:

Have been through the hairs from the bush at the road across from the community centre - nothing exciting I'm afraid. Two hairs from a sheep - no surprise there, as there were sheep in the field next to it, and 6 assorted hairs from a dog.

But at least we checked!
Posted by Jon Downes at 1:50 PM No comments:

Posted by Andrew May at 1:45 PM No comments:

The synchronicity gets stranger. For many years we had a run up by the chickens. It contained two rabbits - Maureen and Pringle. A year or so ago we rehomed them with Kelsey - the little girl of an old friend of mine. Yesterday, a day after our chickens fell prey to a marauding fox, Kelsey ran indoors to tell her mother that there was a badger in their rabbit run! Sad to say, although they extricated the badger (which ran away safely) the rabbits did not survive.  Very sad. I would like to say a big 'thank you' to Judy Dyble, for her kind message re. the chickens on saturday...

*  Jon Downes, the Editor of all these ventures (and several others) is an old hippy of 53 who - together with his orange cat (who is currently on sick leave in Staffordshire) and a not very small orange kitten (who isn't) puts it all together from a converted potato shed in a tumbledown cottage deep in rural Devon which he shares with various fish, and sometimes a small Indian frog. He is ably assisted by his lovely wife Corinna, his bulldog/boxer Prudence, his elderly mother-in-law, and a motley collection of social malcontents. Plus.. did we mention the orange cats?
Posted by Jon Downes at 12:37 PM No comments:

On this day in 1944 the actor Hywell Bennet was born. Bennet is best known for playing mostly gangsters and the occasional detective in TV shows but his most memorable role was as Mr Croup in Neil Gaiman's Neverwhere TV series.
And now the news:


Neverwhere does very well for a budget of about 10p and is worth seeking out:
http://www.youtube.com/watch?v=wIRE3Zuyyy4
Posted by Jon Downes at 12:37 PM No comments: