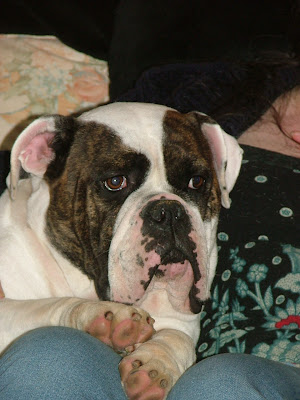 Prudence's various friends and fans around the world will be upset to hear that the poor girl is unwell. She has bladder stones, which are nasty but eminently treatable, and although she is spending the night at the Vet, she should be home tomorrow.
However, I cannot help but be reminded of the last time one of our dogs had to spend an unplanned night at the Vet.
I will, of course, keep you posted.
LATEST NEWS: She is coming home later this morning. However, we are not out of the woods yet, because she needs to be on a special diet which will change the pH of her urine so the stones will dissolve. At the moment she is refusing to eat it...
Posted by Jon Downes at 9:06 PM 4 comments:

Posted by Andrew May at 2:32 PM No comments:

Whilst the focus of the CFZ Mystery Cat study group is predominantly the search for proof of the British big cats, it would be unrealistic to forget that this is only part of a global mystery-cat phenomenon.

Here are a selection of mystery cat stories from around the world.
Tracking Big Cats to Learn Their Secrets
KQED
Learning to see the landscape through the eyes of a wild carnivore helps Bay Area residents appreciate the essential ecological roles bobcats, mountain lions, and other predators play in ecosystems. New research shows that lion leftovers feed a ...
Modern Cats Split with Saber-Tooths Early
Sci-Tech Today
Modern cats diverged from their sabre-toothed ancestors early in evolutionary history to follow a separate trajectory, a study says, also showing a deep separation between domestic cats and big cats.#
Skulls Shed New Light On the Evolution of the Cat
Science Daily (press release)
There was also a marked separation between modern small-medium cats (that is, the domestic cat and its close relatives, the cheetah, puma, ocelot, serval and lynx) and modern big cats (such as the lion, tiger, leopard and jaguar), with a divergence in ...
Cougar encounter
Chico News & Review
Now, cougar allies and advocates worry that the incident—the first California attack on a person since 2007—may generate unwarranted publicity and excitement over the presence of the big cats in a time when their numbers may be dropping. “Every time ...
'Big Cat Encounter' at county fair
WatertownDailyTimes.com
There will be lots of lion around at the 195th Jefferson County Fair, Tuesday through July 15 in Watertown. One of the daily acts, free with fair admission, is the Big Cat Encounter show. The animals in the show come from the Big Cat Habitat and Gulf ...
Another big cat sighting reported in Ashland, KY
WOWK
The Ashland Police Department responded to another big cat sighting this morning.
Ashland Police respond to 3rd sighting of a big cat
WOWK
Police responded to Cheer Street in Ashland, but couldn't find a cougar or mountain lion.
Today, Costa Rica serves as one of 18 Latin American countries that is
By Rick Meril
His feelings that the big cat has not roamed its historical USA territory(California across to the Carolinas) for 100+ years and therefore concentration on protecting the Jaguar should focus on Central and South America where populations still ...
PRINCE MICHAEL: RUSSIA'S TIGERS MUST BE SAVED FROM POACHERS
Express.co.uk
PRINCE Michael of Kent's eyes are fixed with the intense glare of a big cat homing in on its prey. He is talking about one of his driving passions, the fight to save the mighty Amur Tiger and, for once, he picks up the faint scent of success. His ...
Police: Another Big Cat Sighting in Ashland
Police and wildlife experts say do not approach a big cat, call 911.
Big cat 'shops' in Sonepur market - The Telegraph
Bhubaneswar, July 4: An evening walk through a busy market checking the wares displayed in the shops are perfectly normal. Only if the walker does not ...
Posted by Jon Downes at 12:44 PM No comments:

Yesterday was a peculiar and mildly unpleasant one mostly because of the problems with Prudence.http://gonzo-multimedia.blogspot.com/2012/07/prudence-gonzo-daily-dog.htmlWe sincerely hope that today will be better, for us and for her. However you came here to read the latest blog posts not to read me bellyaching about a bulldog's bladder, so on with the show:

We start off today with a link to a news story about the one and only Jefferson Starship, and their plans to visit Israel for gigs later in the year.http://gonzo-multimedia.blogspot.co.uk/2012/07/jefferson-starship-plans-to-rock-tel.html

Martin Stephenson really is a very special and singular talent. It seems that wherever he goes he attracts warm and sympathetic reviews. I really have to get him to play down in Devon...http://gonzo-multimedia.blogspot.co.uk/2012/07/link-martin-stephenson-darwen-library.html

With a quote from 'The Clash' we are proud and chuffed to announce that the new album by Michael Des Barres, which - as you might have gathered from us over the last few weeks - is a bloody smasher, is now available on iTunes. Check it out. NOW! If you don't, you will have me to answer to...http://gonzo-multimedia.blogspot.co.uk/2012/07/michael-des-barres-this-is-public.html

Yesterday we posted a story called 'Another Chris Squire Interview'. Today's title is mighty similar, and as you might have guessed, I found both these Yes-related stories at the same time and posted them in the wrong order. My bad!http://gonzo-multimedia.blogspot.co.uk/2012/07/yes-interesting-chris-squire-interview.html

Rick Wakeman likes cats and does his bit for animal welfare. I like cats (and most other beasts) and do my bit for animal welfare. We have a lot in common. However, he play's piano like his soul was touched by the Gods of Olympus. I play piano like a left handed giant panda with a perceptual disorder. That is why his news story is more interesting than mine would have been.http://gonzo-multimedia.blogspot.co.uk/2012/07/rick-wakeman-at-cats-protection-league.html

And finally... Merrell Fankhauser writes to me on occasion saying jolly nice things about the Gonzo Daily. I very much appreciate that. He also sends me bits and bobs, like this review from Shindig magazine..http://gonzo-multimedia.blogspot.co.uk/2012/07/merrel-fankhauser-sent-me-this-review.html

Well, that is about it for today. I am sorry that my prose is slightly less inspired than usual, but I have been fielding telephone calls from the vet on and off all morning and am ever-so-slightly frazzled.

See you tomorrow, which - if all goes to plan - will be another of my sunday rhyming epics...
Toodle-ooh
Posted by Jon Downes at 12:43 PM No comments:

On this day in 1960 Jane Goodall arrived in Gombe Stream National Park in Tanzania to begin her study of the chimpanzees there.

Chimpanzees in their natural habitat (moving pianos and drinking tea) :

DALE DRINNON IS BACK IN THE SADDLE

Just gone up at Frontiers of Zoology:http://frontiersofzoology.blogspot.com/2012/07/crater-lake-monster-again.html

And at the Frontiers of Anthropology:http://frontiers-of-anthropology.blogspot.com/2012/07/some-new-videos-from-kakha-margiani.html
Just a couple of quickies to get back in the flow of publishing blogs again.
Jeff Meldrum just asked me for more info on Japanese Yokai Hairy humanoids and so I'm working on that one next.Best Wishes, Dale D.
Posted by Jon Downes at 10:44 AM 1 comment:

I had a long discussion with Lars Thomas earlier today. He has more news on the analysis of the hair samples brought back from at the end of last year. They were split into several different groups, and although we have not heard yet from either Dr Todd Disotell in New York, or Professor Brian Sykes in Cambridge, we can now reveal that although the hair does appear to be primate, the Danish team were unable to sequence enough fragments of DNA to tell whether it is monkey, gibbon, orang utan or even human, let alone orang pendek. The hairs were just too badly degraded, and in Lars’ opinion there was nothing else that could be done with the samples that he was given. Let’s hope that the other two teams have better luck.

In a related piece of news, Lars has been working on a scat sample preserved in alcohol sent to us by one of Richard’s Ukrainian colleague from the 2008 Russian expedition.

Unfortunately, the DNA laboratories have closed for the summer and therefore attempts at DNA sequencing have not been done. However, Lars has extracted a number of hairs from the faecal mass, and we are able to confirm that they are from small rodents. Whatever produced the scat had been feeding on mice and other small mammals of that ilk. We will keep you informed of developments as we get them.

The hunt for British Big Cats attracts far more newspaper-column inches than any other cryptozoological subject. There are so many of them now that we feel that they should be archived by us in some way, so we should have a go at publishing a regular round-up of the stories as they come in.

It takes a long time to do and is a fairly tedious task so I am not promising that they will be done each day, but I will do them as regularly as I can. JD
Rain to blame for lack in big cat sightings - BIGCATSINSUSSEX
Bigcatsinsussex research into wild big cats in Sussex to promote understanding and tolerance of these elusive creatures....
And that is the only story there is. BTW, we agree with him entirely!
Posted by Jon Downes at 12:22 AM No comments: