MATTHEW AND EMMA RESCUE A TOAD 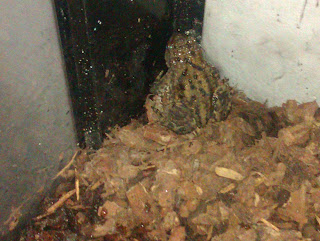 On this day in 2012 Pokemon Black and White version 2 is released, something Max and myself have been looking forward to for some time.
And now the news:
Music from the Pokemon games performed by a concert orchestra:
http://www.youtube.com/watch?v=5TW4dfMYzoI
Posted by Jon Downes at 1:32 PM No comments:

Odds and ends of links, still catching up


Any self-respecting country laying claim to ‘wilderness areas’ has to have them! Reports of large ape-like creatures emanate from remote mountain and forest areas of every continent bar Antarctica: the Sasquatch or Bigfoot of Canada and the United States, the yetis of Siberia, yowies of Australia and abominable snowmen of Tibet — and Southeast Asia, with its stretches of dense and often little-known jungle, is not immune.

What lies beneath?
(This post actually comes with a soundtrack, so at this point you may wish to click this link.)
Malaysia in particular has persistent reports of creatures at home in Endau Rompin national park, or check out this report from Setapak forest. Laos and Vietnam have sightings of ‘hairy wild-men’ from the Truong Son mountains along the remote border area (see here) and Cambodia, the Kulen yeti.
With an estimated 15% forest cover, Thailand is not traditionally a yeti hotspot, but we uncovered similar legends on a visit to Nan province’s Mae Charim national park. Mae Charim lies in a mountainous region of eastern Nan, backing onto the Lao border, and contains extensive forest area and very few inhabitants.

Rom Khlao Village
In fact part of eastern Nan is even known as the ‘empty quarter’ and in Mae Charim there is just one village: the Hmong settlement of Rom Klao. We began our trip in Rom Klao where we met up with our old friend, former communist guerrilla, ex-hunter and now local guide Pha.

A woman whose relatives died in Auschwitz says she was shocked to discover wine bottles featuring images of Hitler in an Italian supermarket. Cindy Hirsch from Philadelphia, U.S. was holidaying with her husband Michael in Garda, northern Italy, when the couple spotted the wine bottle labels featuring pictures of the former Nazi leader.
One of the bottles being sold in a supermarket near their hotel was called 'Mein Kampf' after the right-wing dictator's famous book, another was called 'Ein volk, ein Reich, ein Fuhrer' (one people, one empire, one Fuhrer).

Offensive: Cindy Hirsch from Philadelphia, U.S. was holidaying with her husband Michael in Garda, northern Italy, when the couple spotted spotted the Fuhrer wine bottle labels featuring pictures of the former Nazi leader

Other labels depicted Hitler in different poses including one in which he is shown making the Nazi salute. Another bottle featured an image of Pope John Paul II.

And so another day begins. David B-P has been made redundant, the toads have settled in, Graham is having a couple of days off, and it seems that we won't get the car back until next week, and I am supposed to be filming Jefferson Starship on tuesday. Life is generally crappy, but I expect that it will get better.

Yesterday evening I had a long chat with the ever lovely Helen McCookerybook, and - as always - what was supposed to be a ten minute conversation about a new limited edition release of hers, became a long and rambling chat during which we talked of cabbages and kings until I realised that we had been talking for over half an hour. During this chat she told me about her friend Acton Bell, with whom she has done a number of gigs and also is organising the very groovy sounding Club Artyfarle which seems like an event after my own heart. So, being a nosy bugger, I typed Acton's name into Youtube, and ladies and gentlemen I am smitten! She has an extraordinary talent which is unlike anyone else I have heard in yonks.
http://gonzo-multimedia.blogspot.com/2012/10/actons-sunday-with-helen.html

Yesterday I had a jolly e-mail from Liz Lenten who is remarkably upbeat, probably because she is off on tour with Jefferson Starship. I shall be talking to her at 4:00 so expect more news...
http://gonzo-multimedia.blogspot.com/2012/10/an-email-from-liz-lenten.html

And whilst on the subject of the Jefferson Starship tour here is a rather nifty poster I found...
http://gonzo-multimedia.blogspot.com/2012/10/jefferson-starship-pat-mcmanus-auburn.html

I have received so many emails over the past few days about Michael Des Barres and his current projects, that I felt that we should do an interview with him quickly before his life got any more complicated. So I dropped him a quick email, and ten minutes later we were chatting. He began by saying all sorts of nice things about the Gonzo Daily...
http://gonzo-multimedia.blogspot.com/2012/10/exclusive-interview-michael-des-barres.html

Our daily visit to the remarkable abode of Thom the World Poet; a man whom I admire very much
http://gonzo-multimedia.blogspot.com/2012/10/thom-world-poet-daily-poem_11.html

Yesterday afternoon the ever attentive Mr Ayling sent me a link to a documentary about Ginger Baker. We have to run this he said. So I have.
http://gonzo-multimedia.blogspot.com/2012/10/beware-of-mr-baker.html

On this day in 1982 the Tudor warship, The Mary Rose was salvaged from the sea bed of the Solent where she had lain since the 16th century.
And now the news:
This is good if you're lazy; follow this link to visit the new Mary Rose Museum without having to bother leaving your pc:
http://www.youtube.com/watch?v=4Qw-qN2dt10
Posted by Jon Downes at 12:14 PM No comments: