CRYPTOLINK: Farmer says he has found remains of two mysterious 'Chupacabra' creatures after stumbling across bizarre-looking dead animals in Chile

A farmer has claimed he has found the remains of a two Chupacabra creatures also known as blood sucking monsters after stumbling across bizarre-looking dead animals in Chile. Goat farmer Javier Prohens was having lunch with friends when terrified farmhand 54-year-old Bricio Saldivar alerted them to the bodies of the strange creatures on the outskirts of the small town of Monte Patria in the east central Chilean province Limari.

At first the group thought the remains were those of bats but on closer inspection, they became convinced they are from they mythical creatures. And now the find has sparked fears among other farmers in the nearby area. Querubin Lebron, 38, said: 'Our livelihoods are built on goat farming. There are lots of goats here. 'Although it's said they only attack animals, who knows it is won't attack our children too.' In April last year, a couple from Texas claimed they had captured a Chupacabra in their back garden. However, after an investigation, it was established that the creature was a raccoon suffering from scabies.
Read on...
Posted by Jon Downes at 2:59 PM No comments:

THE LATEST ISSUE OF ANIMALS & MEN 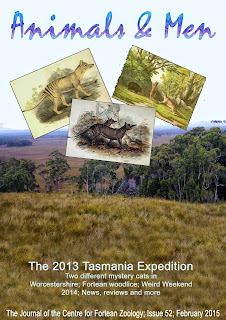 I promised that this would be a year of change at the CFZ, and so it is proving. The digital free online edition of issue 52 of our journal which has been running since 1994 can be seen on our website and on the blog.

If you wish to download it in flipbook format, again for free, use this link

The hard copy and a low cost Kindle edition will be available in a week or so.

Issue 53 will be out on or about the 1st May 2015. If you would like to submit articles please do so via jon@eclipse.co.uk
Posted by Jon Downes at 12:40 PM No comments:

Tom Biscardi Bigfoot Company
CryptoSightings
Tom Biscardi who claims to be a leading Bigfoot expert is now making the search for Bigfoot an investment opportunity. He has founded the firm

Mystery tracks reported on Curtis golf course
McCook Daily Gazette
The Enterprise reports that sightings of a "Bigfoot"-type creature are not unheard of in Nebraska, the latest being of a 7-foot-tall hairy creature, upright
Posted by Jon Downes at 11:49 AM No comments:

THE GONZO BLOG DOO-DAH MAN IS OUT TO LUNCH

* The Gonzo Daily is a two way process. If you have any news or want to write for us, please contact me at jon@eclipse.co.uk. If you are an artist and want to showcase your work, or even just say hello please write to me at gonzo@cfz.org.uk. Please copy, paste and spread the word about this magazine as widely as possible. We need people to read us in order to grow, and as soon as it is viable we shall be invading more traditional magaziney areas. Join in the fun, spread the word, and maybe if we all chant loud enough we CAN stop it raining. See you tomorrow...
* The Gonzo Daily is - as the name implies - a daily online magazine (mostly) about artists connected to the Gonzo Multimedia group of companies. But it also has other stuff as and when the editor feels like it. The same team also do a weekly newsletter called - imaginatively - The Gonzo Weekly. Find out about it at this link: www.gonzo-multimedia.blogspot.com/…/all-gonzo-news-wots-fit…
* We should probably mention here, that some of our posts are links to things we have found on the internet that we think are of interest. We are not responsible for spelling or factual errors in other people's websites. Honest guv!
* Jon Downes, the Editor of all these ventures (and several others) is an old hippy of 55 who - together with an infantile orange cat named after a song by Frank Zappa puts it all together from a converted potato shed in a tumbledown cottage deep in rural Devon which he shares with various fish, and sometimes a small Indian frog. He is ably assisted by his lovely wife Corinna, his bulldog/boxer Prudence, his elderly mother-in-law, and a motley collection of social malcontents. Plus.. did we mention the infantile orange cat?
Posted by Jon Downes at 11:38 AM No comments:

AND TO WHISTLE WHILE YOU WORK... (Music that may have some relevance to items also on this page, or may just reflect my mood on the day)
Posted by Jon Downes at 3:42 AM No comments: