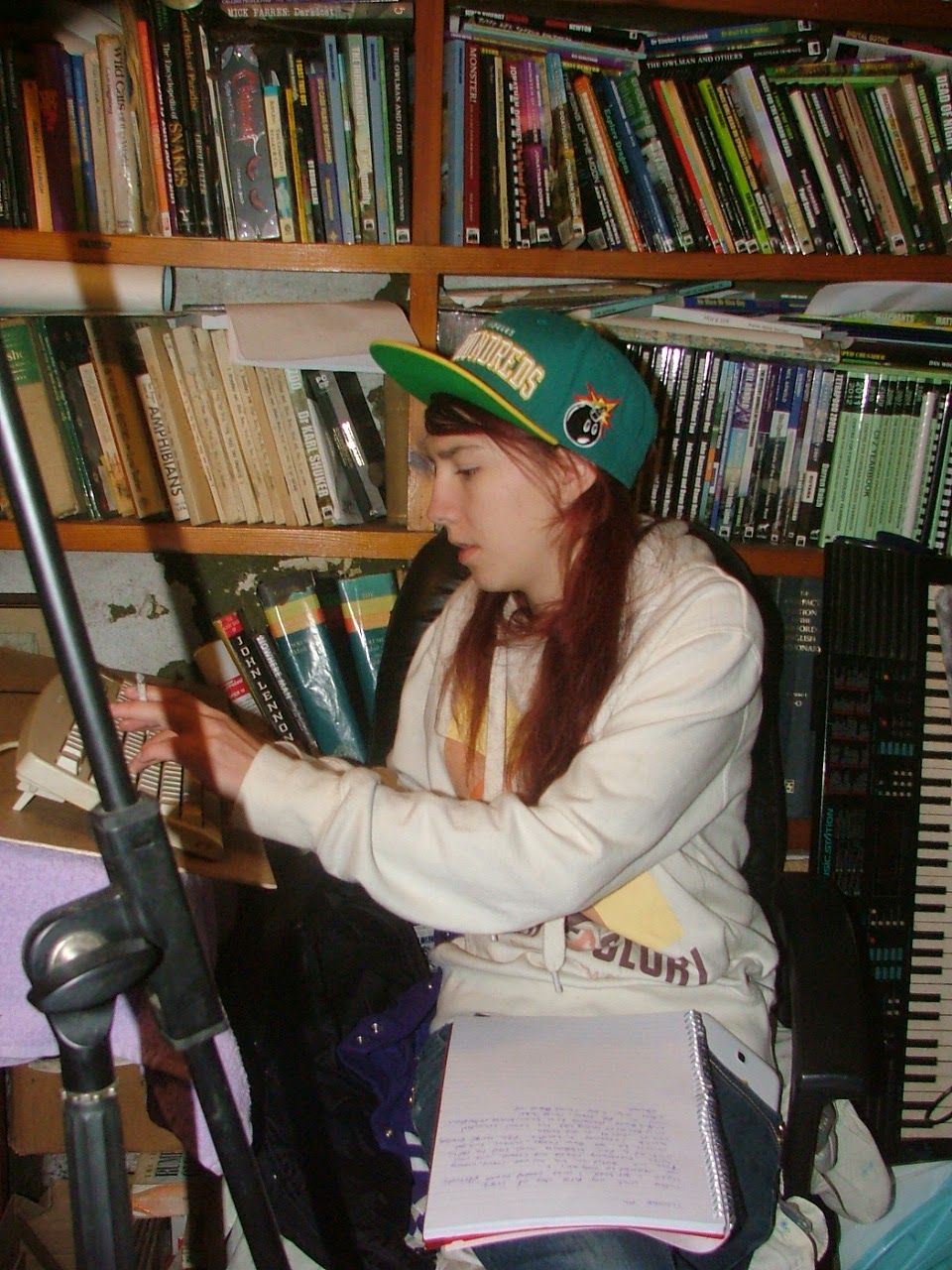 Tamara is the new intern. She is the latest in a line of charming young ladies who have come to do stuff here. Tamara knows her stuff and we are looking forward to a long and mutually fruitful relationship. I have bullied her into writing for these pages so you will soon get to know her for yourself.
1st December.
Today at work, when I arrived I started on feeding the axolotls, the caecilians and the cichlids, worms, but one cichlid still is not eating properly, we tried worms lettuce and water pennywort still no interest, we will keep watch over the next few days to see whether it starts to eat again. Then I cleaned the baby pigeon's old cage, I also weighed the tortoises there weight is still roughly the same, I fed the crow also and checked the other pigeon aviary. After I finished all that I cleaned a tank in the office and fed the fish in the living room.

Posted by Jon Downes at 5:15 PM No comments:

Bigfoot Evidence
Some researchers speculate that bigfoot communicate at times by striking trees with large limbs to produce a knocking sound. The following was ...
Posted by Jon Downes at 2:00 PM No comments:

The Gonzo Weekly #106
www.gonzomultimedia.co.uk/about.html
Crass, Steve Ignorant, Iona, Dave Bainbridge, Daniel Lanois, Cure, John Parr, Peter Banks, Empire, Jon Anderson, Yes, Hawkwind, and Daevid Allen and ....New Seekers fans had better look out! The latest issue of Gonzo Weekly (#106) is available to read at www.gonzoweekly.com, and to download at http://www.gonzoweekly.com/pdf/.
It has Steve Ignorant on the cover, and features an interview with him by Yours truly. We also meet and chat with Dave Bainbridge of Iona about his new album, and legendary record producer David Mackay about his new charity single. Doug Harr goes to see Daniel Lanois (with exclusive piccies) and Mark Murdock runs into Terry Bozzio. And we send Don Falcone to a desert island. Xtul are back in the deep woods, and there are also new shows from the multi-talented Neil Nixon at Strange Fruit and from M Destiny at Friday Night Progressive, and the titular submarine dwellers are back with another episode of Sub Reality Sandwich. There is also a collection of more news, reviews, views, interviews and animals coming in two by twos (OK, nothing to do with Noah's Ark, but I got carried away with things that rhymed with OOOOS) than you can shake a stick at. And the best part is IT's ABSOLUTELY FREE!!!
Read the previous few issues of Gonzo Weekly:
Issue 104 (Adrian Belew cover)
http://gonzo-multimedia.blogspot.com/2014/11/gonzo-weekly-105.html
Issue 104 (Pink Fairies cover)
http://gonzo-multimedia.blogspot.com/2014/11/gonzo-weekly-104.html
Issue 103 (Jack Bruce cover)
http://gonzo-multimedia.blogspot.com/2014/11/gonzo-weekly-103.html
Issue 102 (Steve Hillage cover)
http://gonzo-multimedia.blogspot.com/…/the-gonzo-weekly-102.html


* Jon Downes, the Editor of all these ventures (and several others) is an old hippy of 55 who - together with an infantile orange cat named after a song by Frank Zappa puts it all together from a converted potato shed in a tumbledown cottage deep in rural Devon which he shares with various fish, and sometimes a small Indian frog. He is ably assisted by his lovely wife Corinna, his bulldog/boxer Prudence, his elderly mother-in-law, and a motley collection of social malcontents. Plus.. did we mention the infantile orange cat?
Posted by Jon Downes at 12:51 PM No comments:


AND TO WHISTLE WHILE YOU WORK... (Music that may have some relevance to items also on this page, or may just reflect my mood on the day)
Posted by Jon Downes at 7:45 AM No comments: