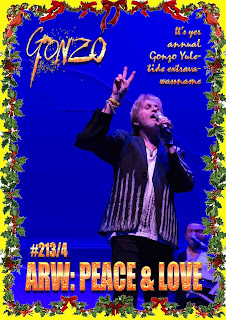 
SPECIAL NOTICE: If you, too, want to unleash the power of your inner rock journalist, and want to join a rapidly growing band of likewise minded weirdos please email me at jon@eclipse.co.uk The more the merrier really.
Posted by Jon Downes at 11:39 AM No comments:

Bigfoot Evidence
Chance tells us about his sightings of the Sasquatch in the Oklahoma area. He has seen Bigfoot 3 times. He also tells us another encounter someone ...

Bigfoot Evidence
Robert Dodson is scoping out a new road he discovered in the SE Oklahoma mountains, and braving a bitter cold front looking for sasquatch.

Is McDonald's the Nail in the Bigfoot Coffin?

Bigfoot Evidence
How can bigfoot exist in an area that has so many McDonald's? Bob Gymlan on youtube explains the spatial perspective.

Bigfoot Evidence
Two bigfoot sightings separated by 20 miles & three days. We search for bigfoot between the two sighting locations & do a roundtable drive along the ...

Sasquatch Chronicles
Manitoba Bigfoot. In April 16, 2005 a ferry operator named Bobby Clark filmed what he believes to be a Sasquatch.
Posted by Jon Downes at 5:30 AM No comments:

THE GONZO BLOG DOO-DAH MAN DOES SOME LAST MINUTE SHOPPING


* Jon Downes, the Editor of all these ventures (and several others) is an old hippy of 57 who - together with a Jack Russell called Archie, an infantile orange cat named after a song by Frank Zappa, and two half grown kittens, one totally coincidentally named after one of the Manson Family, purely because she squeaks, puts it all together from a converted potato shed in a tumbledown cottage deep in rural Devon which he shares with various fish. He is ably assisted by his lovely wife Corinna, his bulldog/boxer Prudence, his elderly mother-in-law, and a motley collection of social malcontents. Plus.. did we mention Archie and the Cats?
Posted by Jon Downes at 5:00 AM No comments:

ON THIS DAY IN - 1715 - James Stuart, the "Old Pretender", landed at Petershead after his exile in France.
And now some more recent news from the CFZ Newsdesk