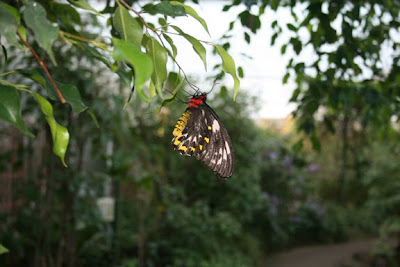 This is Ornithoptera priamus the Queensland Birdwing butterfly also sometimes known as the Cairns butterfly and is part of the Troidini clade of Swallowtail butterflies (Papilionidae). 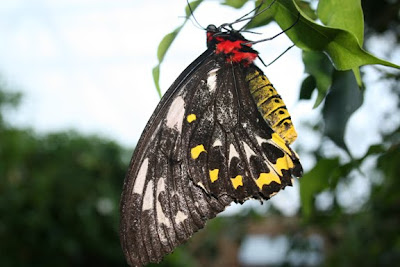 erms of wingspan found in Australia. The females have a massive wingspan of up to 22cm with the males being considerably smaller, although equally spectacular in appearance due to their brilliant colours. Predictably, because of their enormous size they do tend to display slow aeronautical skills and can be easily captured with a net. They have a wide distribution through 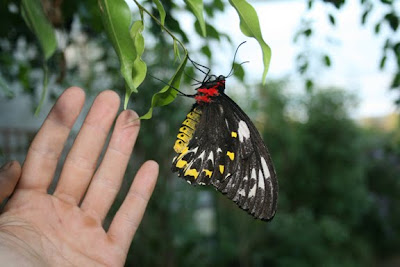 out Australasia from Papua New Guinea, the Solomon islands to northern Australia, most notably Queensland. They were originally described from Seram Island in Indonesia in 1758 by Linnaeus. 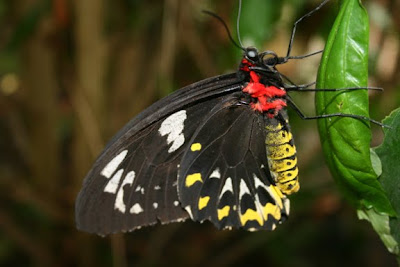 This is the first time this species has emerged in the UK in the last ten years and we at Stratford upon Avon Butterfly Farm are very proud of them indeed.

http://www.bbc.co.uk/news/science-environment-17468907
This is, I am sure, an early April Fool's day spoof (people have beentrying to make working man-carrying ornithopters for donkey's years,without much success). Question is, how the hell has it ended up on theBBC's science and technology page without even a hint of joke to it?

An hour later:
Jon,This is definitely a fake.I can think of a couple of ways to do this one; either videomanipulation or actually "fly" the thing with the pilot hanging off awire zip-line, which is subsequently edited out of the video frame byframe.Quite who got it onto the BBC deserves a medal, though.

About an hour after that:
By way of background, years and years ago I qualified for a basic-levelhang-gliding pilot certificate. As a result of this, I know how heavy aman-carrying glider is, and how much wing area you need even for just acontrolled hilltop to valley glide. That flapping thing has far too little wing area to carry a man, and ismuch, much too light to be strong enough to carry a man. A hang-gliderweighs about 50 kilos or thereabouts; you can stand up with one on yourshoulders (you have to, to be able to launch one) but it isn't easy andas to flapping wings too, this is impossible. A person cannot flapwings heavy enough to support a person and glider with just arm power(or even arm and leg power combined; this has been tried) alone.Finally, the wings aren't joined in the middle. Hang-glider wings arejoined, because that's where much of the lift comes from; hang-gliderwings are a complex shape so designed that when you increase the angleof attack by pushing the control bar out, the centre of the wing stallsfirst and the wing only slowly loses lift. This makes landing thethings a good deal easier; you can scrub off speed and make acontrolled landing.That contraption doesn't have the main lift zone that that sort of wingneeds, and on landing the entire thing would stall all at once. Havingonce managed to land a glider on a drystone wall, I can easily see theneed for a wing that is predictable on landing.It's a fake. The film is a damn good fake, and the editing is firstrate, but it is still a fake. Check with Matthew Williams; he has microlight experience and will be able to confirm what I say here.

Later that evening...
http://www.foxnews.com/scitech/2012/03/22/dutch-artist-admits-faking-viral-human-bird-wings-video/Not a real model on a zip-wire as I thought, but cgi using dodgy focus to cover inadequacies of the computer imaging.You know, we're going to see more and more of this in future. The new Fortean mantra is going to have to be not "pictures or it never happened" but "physical evidence that stands up to police evidence levels, or it never happened".
Posted by Jon Downes at 12:35 PM No comments:

New on the Frontiers of Zoology:
http://frontiersofzoology.blogspot.com/2012/03/el-chupacabras-del-sur-america.html

New on Cedar and Willow:
http://cedar-and-willow.blogspot.com/2012/03/reenajonni-future.html

New on Benny's blog
An article on Violence Against Women in Comics (Similar to one of mine posted a few moths back)
http://benny-drinnon.blogspot.com/2012/03/violence-against-women-in-comics.html
Posted by Jon Downes at 11:33 AM No comments:

On this day in 2001 the Mir space station was disposed of when it was left to fall out of orbit and burn up when it re-entered the atmosphere.

New on the Frontiers of Zoology:
A reprinted blog alleges some hanky-panky in repcording of reported Bigfoot remains:
http://frontiersofzoology.blogspot.com/2012/03/after-finding-bigfoot-with-lon.html

And on Frontiers of Anthropology,
A report on an alleged Cuneiform inscription reported in Peru:
http://frontiers-of-anthropology.blogspot.com/2012/03/investigations-of-bolivia-fuente-magna.html
Posted by Jon Downes at 9:28 AM No comments:

We also edit a daily music 'zine for those jolly nice people at Gonzo Multimedia. In the last few days we have posted:

GREG LAKE: Punk rock 'wasn't a musical movement'
HOW IT ALL BEGAN
RICHIE HAVENS: The Lost Broadcasts
WALLY: The Belgians like 'em (and so do I)
How the world's first rock concert ended in chaos
JUDGE SMITH: Popular in Belgium
SOMEONE ELSE THINKS THAT THE JACKSON WEBBER ALBUM ...
JUDGE SMITH: new podcast now online.
JACKSON WEBBER: Smashing new album
TROY DONOCKLEY: Nightwish's Uilleann Pipes Virtuos...
A TOTALLY FEEBLE EXCUSE FOR POSTING: Dave Gilmour ...
Posted by Jon Downes at 8:30 AM No comments: