HOPPITY HENS ON SUNDAY GO GONZOID YES THEY DO 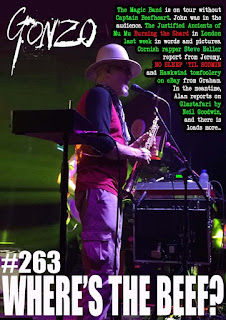 The Magic Band is on tour without Captain Beefheart. John was in the audience. The Justified Ancients of Mu Mu Burning the Shard in London last week in words and pictures. Cornish rapper Steve Heller report from Jeremy, NO SLEEP ‘TIL BODMIN and Hawkwind tomfoolery on eBay from Graham. In the meantime, Alan reports on Glastafari by Neil Goodwin, and there is loads more...

And there are radio shows from Mack Maloney AND Strange Fruit, AND Friday Night Progressive. We also have columns from all sorts of folk including Neil Nixon, Roy Weard, C.J. Stone, Mr Biffo and the irrepressible Corinna. There is also a collection of more news, reviews, views, interviews and southern dibblers who have blown a fuse (OK, nothing to do with small marsupials who are not good at household electrics, but I got carried away with things that rhymed with OOOOS) than you can shake a stick at. And the best part is IT'S ABSOLUTELY FREE!!!


SPECIAL NOTICE: If you, too, want to unleash the power of your inner rock journalist, and want to join a rapidly growing band of likewise minded weirdos please email me at jon@eclipse.co.uk The more the merrier really.
Posted by Jon Downes at 2:30 AM No comments:

ON THIS DAY IN - 1792 - The trial of France's King Louis XVI began. He was eventually put to death for the 33 charges.
And now some more recent news from the CFZ Newsdesk