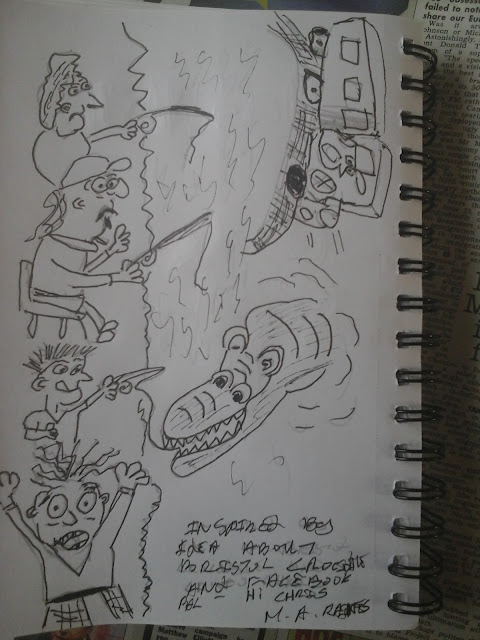 http://www.alamy.com/stock-photo-bristol-crocodile-hunt-after-a-possible-sighting-in-the-avon-gorge-71184275.html
Posted by Jon Downes at 3:41 PM No comments:

DAVEY CURTIS: What on earth is this?

Jon what made this? A bouncing snail? A slug on a space hopper?

CRYPTOLINK: Witness Claims to Have Spotted a Thylacine

Witness Claims to Have Spotted a Thylacine

Animal Planet
This witness claims to have seen a Tasmanian Tiger on the side of the road. And she isn't the only one.
Posted by Jon Downes at 3:14 PM No comments:

Legendary sea serpent returns to Farm Pond
Martha's Vineyard Times
Late in May each year, when the southwest breezes start to warm our waters, creating an eerie chartreuse mist over Farm Pond in Oak Bluffs — that ...
Posted by Jon Downes at 3:11 PM No comments:

THE GONZO BLOG DOO-DAH MAN TRIES TO KEEP IT TOGETHER

NH Voice
A man from Utah has claimed that he has found a well-preserved skull of Bigfoot. Todd May from Ogden, Utah came across the large 75-pound object ...
Professor Says Fossilized 'Bigfoot Skull' Actually Just a Rock - CDA News
Full Coverage

He's out there! Bigfoot hunters gather in Mississippi

WBRZ
Don McDonald, from the Gulf Coast Bigfoot research organization, hosted the event. He told WDAM television that he has spent 20 years trying to track ...

fox6now.com
LITTLETON, North Carolina — Several people in the small North Carolina town of Littleton are claiming to have seen what some are calling “Bigfoot.”.

Before It's News
This is my recollection of a recent sasquatch encounter where I was lucky enough to witness one running very close to me. I startled it with my ...

Bigfoot Research News
Tim Fasano is no stranger to swamps and thick woods. The guy spends more time in the bush looking for Skunk Apes, than just about anyone

myfox8.com
LITTLETON, N.C. – Several people in a small North Carolina town are claiming to have seen what some are calling “Bigfoot.” WNCN reported that ...

BozzFeed
Is this “Bigfoot”? The U.S. Fish & Wildlife Service have posted a photograph of a mystery species that has been “discovered”on Montana's Bob ...
Posted by Jon Downes at 3:30 AM No comments:

ON THIS DAY IN - 1674 - Sivaji crowned himself King of India.
And now some more recent news from the CFZ Newsdesk