About 2 weeks ago at a friend`s house in Surrey, I found the following in J.L. Knapp`s  The Journal of a Naturalist (1830)

“ I think we have reasons for suspecting, that a shrew new to exists in this neighbourhood, A pale blue shrew (Sorex Daubentonii? Cuvier) has been seen about the margins of our reens (ϯ) ,and the deep marsh ditches cut for draining the water from the low lands of the Severn; and something of the same kind , in a half digested state , has been found in the stomach of the heron If it exists with us, a similar tract of land in more fenny countries may contain it plentifully , though it has yet  escaped attention.” (1) I`ve not been able to find out any more about this anywhere, including in a comprehensive book on shrews in the Zoological Society of London library. I`ve been telling people this was a “water-shrew”, which is wrong, the text just says shrew. An encyclopaedia published in 1819 mentions a blue shrew in Java, but that`s hardly anywhere near the Severn!!

Knowledge Nov. 1898 refers to the Irish “Connagh” worm – any ideas anyone what that might have been? (2) Another book, whose title I cannot recall, but published I think c. 1940s or `50s, refers to Irish white trout with magical powers (3)

EDITOR'S NOTE: Sorex Daubentonii is an archaic synonym for Neomys fodiens the water shrew, which is a well known British species. It is not blue.
Posted by Jon Downes at 12:21 PM No comments: 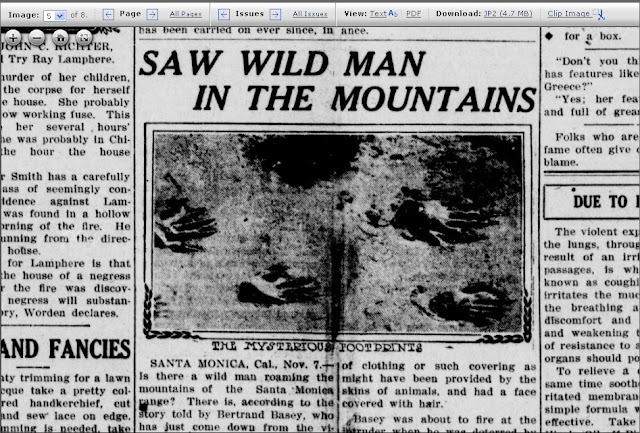 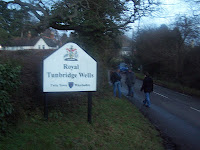 In November last year, there were widespread news reports of a sighting of what became known as the Tunbridge Wells Bigfoot, a roaring, black hairy figure "eight feet tall" with red eyes that startled an eyewitness walking on The Common at night. London Cryptozoology Club decided to investigate.It should be noted that we went to Tunbridge Wells with a very sceptical view of this so-called "Tunbridge Wells Bigfoot" (TWB) phenomenon. We were particularly sceptical of an online posting by "Greham S," who claimed that a courting couple on a bench in The Common had witnessed the "Ape-Man" back in World War Two. Greham S left no other identifiers, and didn't give his source. There was also said to be an encounter with the "Kentish Apeman" by Territorial Army soldiers in 1991 at Bluebell Hill, Kent, which they saw off by throwing stones at it. We were not expecting to find TWB, we felt that the answers, if any, were more likely to be in what they diplomatically call the "pyscho-social realm".

THE GONZO BLOG DOO-DAH MAN DOES A LITTLE DANCE

And so it is another weekend already. Time goes by so fast as you get older. This is an unusual weekend as nothing is scheduled apart from a telephone call from the BT engineers tomorrow afternoon. Apart from that, all I have to do is to do the Gonzo Weekly newsletter and sit down with the dog on my lap as I read Invertebrate Conservation News. Bliss!

*  Jon Downes, the Editor of all these ventures (and several others) is an old hippy of 53 who - together with his orange cat (who is currently on sick leave in Staffordshire) puts it all together from a converted potato shed in a tumbledown cottage deep in rural Devon which he shares with various fish. He is ably assisted by his lovely wife Corinna, his bulldog/boxer Prudence, his elderly mother-in-law, and a motley collection of social malcontents. Plus.. did we mention the orange cat?
Posted by Jon Downes at 12:01 PM No comments:

On this day in 1941 batsh*t insane narcissistic dictator of North Korea Kim Jong-il was born.
And now the news:

He invented the Hamburger, though why he named it after a city in Germany though is anyone's guess, what a kooky little mass-murderer he is:
http://www.youtube.com/watch?v=bx4iC5Gtzk8
Posted by Jon Downes at 12:00 PM No comments: