Double vision: Two rare white sparrows are now feeding in a Moray garden.© Linda Crowther
A Moray woman who photographed a rare white fledgling sparrow in her garden last week was left ‘stunned’ when a second white bird turned up.

Thought to be a ‘one-in-a-million’ rarity, the white sparrows have a condition known as leucism that leaves their feathers either partly or completely white.

While such birds have been spotted before around the world, intensive internet searches have so far revealed no previous instances where more than a single bird has been seen at the same spot. 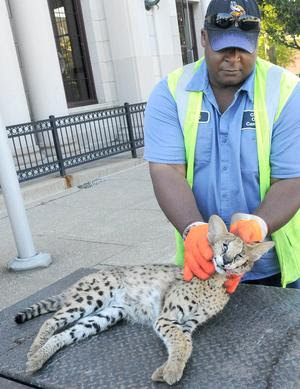 CANTON — Eric Blackshear wasn’t sure what he was going to find when he was called about 8:30 a.m. Wednesday to remove a dead animal from the roadway.

As a 17-year veteran of the Canton Street Department, Blackshear has received his share of calls to pick up different animals — coyotes, foxes, one time even a wolverine: “And I thought, ‘yeah, right.’”

This time, he was told it was a dead leopard that might have been struck by a vehicle in the 1100 block of Navarre Avenue SW.
Read on...
Posted by Jon Downes at 11:17 PM No comments:

In our series on the classic photographs of the Loch Ness Monster we move onto the famous picture taken by Lachlan Stuart in 1951.
At that time, things were pretty quiet at Loch Ness. Sightings of the creature still continued but these were the years of post-war austerity and rebuilding, so it seems that the Loch Ness Monster was not high up on the list of newsworthy items. Indeed, the last photograph of note prior to Lachlan Stuart appears to have been the one taken by F.C. Adams 17 years before in August 1934. Despite the alleged ease with which supposed fake photographs can be made, this seemed a long time to wait for the next one. Either way, this photograph exploded onto the scene on the 16th July 1951 via the pages of the Sunday Express. 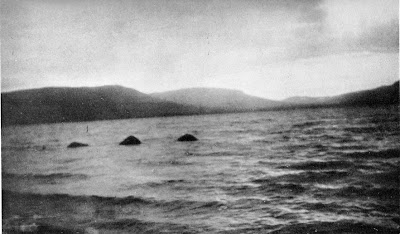 The incident had happened the day before and Constance Whyte in her book "More Than a Legend" recounts the tale which we summarise here.

On that Saturday, Lachlan Stuart had arisen at about 6:30am to milk his cow on the croft he and his family occupied about 100 feet above Loch Ness at Whitefield which is almost opposite Urquhart Castle. He glanced out at the loch and noticed what he took to be a motor boat heading north up the centre of the loch.
Read on...
Posted by Jon Downes at 11:02 PM No comments:

Posted by Jon Downes at 9:47 PM No comments:

And so we are almost ready to go to Oakham. We are taking Mother home after having spent the last five weeks here, and we are going to miss her terribly. I will be taking my slightly antiquated laptop with me, and I am pretty sure that I will be able to do most (if not all) my daily bloggybits from Mother's house for the next few days. We shall be staying with Mother for a few days to get her settled back in, and will be back on sunday or monday. In the meantime, enjoy today's bloggybits:

We kick off with another great review of Michael Des Barres' new album 'Carnaby Street'. It begins with the words: "Well Michael Des Barres is, without any doubt, a very famous guy. I’m sure that most of you are aware of his work in music & acting generally since the late 60s". No kidding! Not only has Michael had a stellar career but it is far from being over. His new album is not only the best slice of raw rock and roll that I have heard in yonks, but it is getting an overwhelming critical response. I have never seen such a barrage of great reviews...
http://gonzo-multimedia.blogspot.co.uk/2012/07/link-michael-des-barres-review.html

Here is a link to an interesting European review of Chris Thompson's magnificent new live CD/DVD package. Chris has one of those unforgettable rock music voices (the sort I have been wishing that I had since I first began to sing) and the album is a joyous romp through his back catalogue, both solo and with he unforgettable Manfred Mann's Earth Band. The review is by someone for whom English is not their first language, and says: "I have not the least objection to Chris Thompson here now to those days raked back, because he does this in a sublime way". Ignoring the grammar, I think that is a charming and elegant
way of putting it...
http://gonzo-multimedia.blogspot.co.uk/2012/07/link-chris-thompson-berlin-live.html

I don't usually come over as a patron of the Arts but I really like this painting of the immportal and invisible Captain Beefheart all trouted up to the nines. If I had money it is the sort of thing that I would probably buy. Sadly I not only have no money, but no wall space for any more pictures, as anyone who has ever visited my humble abode will tell you...
http://gonzo-multimedia.blogspot.co.uk/2012/07/captain-beefheart-painting.html

I haven't seen Gordon Giltrap in years, but twenty odd (very odd) years ago I saw him many times and even got to know him slightly, and I can attest that he is probably the most amazing acoustic guitarist that I have ever had the privelige of meeting in person with the possible exception of John Renbourn. I own many of his albums, and would probably enter this compy if it wasn't for the fact that working for Gonzo probably means that I would be disqualified.
http://gonzo-multimedia.blogspot.co.uk/2012/07/competition-win-tickets-to-see-gordon.html

I have been following the ever changing soap opera which is Yes for many years, and I have to say that I get a little bit anal about the whole thing. I am very much of a Yes fanboy, and interviewing Jon Anderson recently was a career highlight for me. Today there is another interview with the band in which not a lot is said, but a hell of a lot is implied. I have had a few emails from Gonzo Daily readers on this subject. I honestly don't know any more than you do. Just watch this space.
http://gonzo-multimedia.blogspot.co.uk/2012/07/he-just-owns-that-role-chris-squire-on.html

Erik Norlander is a phenomenal musician. Boy he can play! The more I hear of his various projects (and there are more of them than you might think) the more of a fan I get of him. Here is another sublime review of the Live in Gettysburd CF/DVD package
http://gonzo-multimedia.blogspot.co.uk/2012/07/link-erik-norlander-galactic-collective.html

And that, my dear compadres is that. See you from Oakham tomorrow...
Posted by Jon Downes at 1:01 PM No comments:

http://cryptozoologynews.blogspot.com/
On this day in 1984 the notorious murderer and grave robber Ed Gein died. Gein was, to put it mildly, quite messed up and his case inspired the films Psycho and Texas Chainsaw Massacre along with the book and later film Silence of the Lambs. You can read about his misdeeds here (warning: NOT for the faint of heart): http://en.wikipedia.org/wiki/Ed_Gein

A shot by shot analysis of the shower scene from Alfred Hitchcock's Psycho:
http://www.youtube.com/watch?v=wBAMzmQ2SqQ
Posted by Jon Downes at 1:00 PM No comments: