Posted by Jon Downes at 7:05 PM No comments: 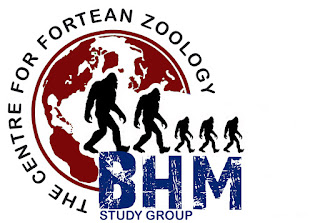 There is some confusion following my announcement last week that Glen Vaudrey and Colin Schneider are now running the CFZ BHM Study Group. One commentator posted that she was very pleased that the CFZ were now studying such things.

The CFZ have always studied such things and there has been a BHM Study Group since 2002. It has, however, been in abeyance for a few years due to the illness and subsequent death of the original coordinator. The group is not just studying either British phenomena or zooform phenomena. The idea is to act as a clearing house and to promote research – using the scientific method – into all BHM phenomena, whether it be physical or parapsychological in origin.

I would urge everyone who is interested in joining in such research to get in touch with Glen or Colin, or – conversely – with me, and I will pass your messages on.


Good luck chaps and chapesses.
Posted by Jon Downes at 6:07 PM No comments:

Just to keep you all updated, on the 12th of January this year, Graham, Charlotte and I took a party of journalists and videogame executives to two locations in North Devon, where there have been a string of sightings of alleged big cats over the last few years. At the second of these, a dismembered sheep skeleton was found by Mike Levaggi of Hope and Glory Publicity. The skeleton has been examined by Charlotte, and by Carl Marshall. These two preliminary examinations have yielded the following results:

Posted by Jon Downes at 6:04 PM No comments:

CARL AND OLIVIA FOR THE MYSTERY CAT STUDY GROUP

As you may have noticed, we are in the middle of the biggest shake up that the CFZ has had in some years.

Last week, I announced that Glen Vaudrey and Colin Schneider are taking over the CFZ BHM study group. Now, it is the turn of our other dedicated study group: the Mystery Cat Study Group.

This was the first of our study groups, but none of the people that have been in charge of it have ever worked out the way that I have hoped.

However, I am pleased to announce that – effective immediately – Carl Marshall is taking over the study group. Olivia, who has been running the big cat news aggregator for the last 18 months will carry on doing so, and will basically be helping Carl make the CFZ Big Cat Study Group an outfit to be reckoned with!

Posted by Liv McCarthy at 2:14 PM No comments:

ON THIS DAY IN - 1900 - The Holland Senate ratified the 1899 peace conference decree that created in international arbitration court at The Hague.
And now some more recent news from the CFZ Newsdesk