CARL MARSHALL: Waste Not Want Not! 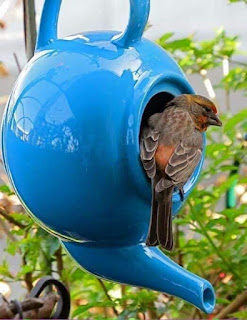 We’re always hearing how we as humans are ruining the planet with our waste products. Whether it be plastic pollution or resource depletion, we are undoubtably destroying our planets viability to the extent that thousands of species of plants and animals are in serious and unprecedented danger of extinction.

So why then don’t we try to use some of our waste to benefit these unfortunate species?

Well, here is a fantastic example of how we can, rather than simply throwing out our unwanted products, actually use them to help make a difference – to actually benefit species! This fantastic environmental recycling idea was brought to my attention by my good friend Chloe Marie Bell. It’s so simple, rather than throwing out an unwanted teapot, with a little imagination, this unwanted item would make a fantastic birdbox for smaller bird species such as songbirds; the spout even making an effective drainage system.

An old boot would also work.

If we all take the time to think of alternate uses for our unwanted household items such as Chloe’s ‘teapot birdboxes’, we would effectively be helping wild animals, which in turn, would benefit the planet that we all call our home.
Posted by Jon Downes at 3:47 PM No comments:


Posted by Liv McCarthy at 1:49 PM No comments:

THE GONZO BLOG DOO-DAH MAN IS BACK TO THE FUTURE

The new show - On The Track Xtra 26.3 (Sturgeons in Moscow and Yeti/Bear hair samples)

Well, ladies and gentlemen, welcome to the third episode in our new series: On The Track Xtra! We hope that you enjoy it. I think the production values are ever improving and we are learning (slowly) all the bells and whistles which are now available via YouTube. I should - however - warn you that If you hear strange noises in the background of the segments which feature me doing a piece to camera, those are the filters of the two tanks in the office; one containing Clarence the walking catfish, and another containing a large and massively elusive leaf fish that we have been looking after for Max ever since he went off to university, something in the region of ten years ago. At least, I’ve always thought it was a leaf fish, and worse, have been telling everyone it’s a leaf fish for the last decade. However, when I looked her up today to try to display my academic chops by giving her Latin name, she doesn’t look like any of the leaf fish on Google. But that’s the way the cookie crumbles. This issue contains Max livestreaming from the Moskvarium in Moscow, and Carl and Richard discussing and me talking about the legacy of Heuvelmans and On the Track of Unknown Animals, Corinna doing Watcher of the Skies with Lilith, and a brief nod to Gef the Talking Mongoose of Cashen's Gap, and a snide dig at our present Prime Minister. I really miss doing the Weird Weekends each year, but with the health problems currently bedevilling the CFZ to restart them is impossible. But I truly hope that these shows have something of the taste of the mixture of hard science, weird shit and surreal odness that made the 17 Weird Weekends such a joy to be part of.
Posted by Jon Downes at 6:00 AM No comments:

ON THIS DAY IN -  1942 - During World War II, the British began a major offensive against Axis forces at El Alamein, Egypt.
And now some more recent news from the CFZ Newsdesk