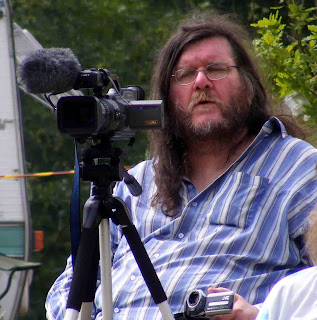 You will probably have noticed that both On the Track and the Sunday videos from this year's Weird Weekend have not yet appeared. There has been a temporary setback.

We managed to blow our firewire card, which is necessary to transfer data from the video cameras to the main computer. Whilst this has now been replaced, it took a couple of days (even though it only cost fifteen quid) and we are now running several days behind schedule.

The situation was not helped by my recent illness, so whilst you can be assured that all these videos WILL appear, please be patient. Everything comes to those who wait!
Posted by Jon Downes at 4:55 PM No comments:

A man has been arrested on peeping tom charges, after being discovered inside a septic tank under a women's toilet.
Kenneth Enslow was arrested on Sunday after a horrified woman called police to White Water park just west of Tulsa in Oklahoma.
The mother had taken her seven-year-old daughter to the toilet and noticed a man looking up at her from below.

"He went in there, climbed down in the septic and was looking up at the people utilising that facility," Tulsa County Sheriff's Major Shannon Clark said.
Enslow, who was covered in human waste, was helped from the septic tank by members of the Keystone Fire Department.
They sprayed him off with a fire hose and then took him to hospital for a physical and mental evaluation.
"It's like he was just sitting down in the water just wading. It's not something you expect to see whenever you're wanting to go to the restroom," Ambra Reynolds told KJRH-TV.
"I screamed, grabbed my daughter, trampled my son on the way out scared to death. We ran out."
The 52-year-old suspect told police that his girlfriend, Angel, had hit him in the head with a tyre iron and dumped him in the toilet, according to the police report.
Read on...
Posted by Jon Downes at 4:47 PM No comments: 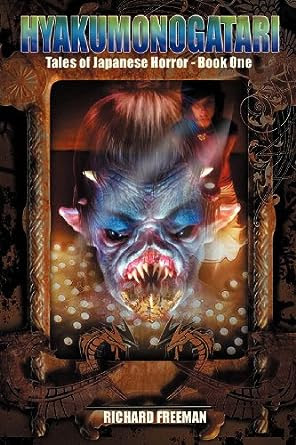 Cryptozoologist Richard Freeman has suddenly launched himself on the world of weird fiction. Not only has he been able to showcase an extraordinary imagination he also been quite wonderfully prolific. Last year he published `Green, Unpleasant, Land', a collection of strange tales taking as their starting points the British countryside and its folklore, with knowing nods towards such masters of this genre as Arthur Machen and Algernon Blackwood. Now he has been inspired by his love of Japan and its own particularly peculiar legends.
``Hyakumonogatari' is the first in an ambitious series of volumes of short stories set in Japan and reflecting a Japanese tradition of storytelling in which 100 spooky yarns are told by a number of guests. The ritual is supposed to ultimately call up a ghost. This volume contains 25 stories and Freeman is intending to write the full 100 himself in three follow-ups over the next couple of years. Judging by this initial collection, there is little doubt he will succeed admirably.
Richard Freeman is an accepted British authority on the Yokai, the surreal menagerie of ghosts-cum-demons-cum-monsters that inhabit Japanese folklore. The Yokai have provided the author with splendid material for `Hyakumonogatari'. Here you will encounter a bewildering array of supernatural menaces, from demonic humanoids and bestial monsters through to polite little critters that will devour you as soon as bid you good day and cute little doggies that spell instant death should you so much as brush against them. Here too are such weirdies as animated metal skeletons, murderous strips of cloth and trees bearing fruit with the faces of men. Freeman's stories are set throughout the islands of Japan and in a number of different periods, from the times of the Shoguns through to the present day.
The stories are straightforwardly told, almost journalistic in tone at times. This, plus Freeman's undeniable knowledge and love of Japan, lends an authenticity essential considering the grotesque and bizarre nature of his protagonists. The style works especially well in my favourite story, `Brother On The Hill', which tells of primitive hominids encroaching on the domain of humans in a remote mountain forest in Hokkaido. In `Brother On The Hill', Freeman's expertise as zoological director of the Centre for Fortean Zoology lends further authenticity to a tense and thoroughly believable narrative.
`Hyakumonogatari' is a startling collection of more than two-dozen stories ideal for horror fans who are jaded by the endless round of vampires and werewolves (and vampires who fight or fall in love with werewolves). Any one of these yarns would have graced the pages of the old `Weird Tales'. Bring on the next 75, I say!
Posted by Jon Downes at 4:04 PM No comments:

Get ready to weep so grab the tissues

But what a time
it was to live,
for that and rhyme
we beg forgive.
And that's enough poetry for now
but we'll be back next week (and how!)

*  Jon Downes, the Editor of all these ventures (and several others) is an old hippy of 54 who - together with his orange cat (who is currently on sick leave in Staffordshire) and two very small kittens (one of whom is also orange) puts it all together from a converted potato shed in a tumbledown cottage deep in rural Devon which he shares with various fish. He is ably assisted by his lovely wife Corinna, his bulldog/boxer Prudence, his elderly mother-in-law, and a motley collection of social malcontents. Plus.. did we mention the orange cat?
Posted by Jon Downes at 1:06 PM No comments:

On this day in 1637 Robert Fludd died. Fludd was an ocultist and all round barmy sort of bloke. However, and let this be a lesson for anybody who might dismiss people with unusual interests off-hand and with a po-faced expression, he was a really good physician for his time and may have discovered the circulatory system alongside William Harvey and was almost certainly the first to support the idea in print.
And now the news:

The Flood:
http://www.youtube.com/watch?v=aCHg5r6rFoI
Posted by Jon Downes at 1:06 PM No comments: