Well, after an eye test and a long period of waiting, they’re finally here. My glasses! Here is a picture of them that I did on the computer:

It’s not that good, but they’re glasses, and that’s what counts. The reason I need them is because I’m a bit more short-sighted in one eye than the other, and it was making it hard for me to see. So Mum and I popped down to our local Tesco, got my eye test done, and voila! Glasses needed.

I’ll upload a picture of me with them on soon. For the moment, however, you guys will just have to put up with the drawing. Love Harriet!

2. Monster! by Neil Arnold (-)
3=. The Owlman and Others by Jonathan Downes (5)
3=. The Mystery Animals of Ireland by Gary Cunningham and Ronan Coghlan (6)
6=. Extraordinary Animals Revisited by Dr Karl Shuker (8)
7=. UFO Down by Andy Roberts (2)
7=. The Great Yokai Encyclopaedia by Richard Freeman (3)
7=. In the Wake of Bernard Heuvelmans by Michael Woodley (6=)
7=. Haunted Skies Volume Two by John Hanson and Dawn Holloway (-)

2=. Haunted Skies Volume One by John Hanson and Dawn Holloway (2)
2=. Extraordinary Animals Revisited by Dr Karl Shuker (8)
4. Big Bird by Ken Gerhard (-)
5. The Monsters of Texas by Ken Gerhard and Nick Redfern (4=)
6=. Dinosaurs and other Prehistoric Animals on Stamps by Dr Karl Shuker (-)
6=. The Mystery Animals of Ireland by Gary Cunningham and Ronan Coghlan (-)
6=. Space Girl Dead on Spaghetti Junction by Nick Redfern (-)
9=. Karl Shuker's Alien Zoo by Dr Karl Shuker (4=)
9=. In the Wake of Bernard Heuvelmans by Michael Woodley (4=)
Last month's positions in this pinky colour, which I think is called cerise. March was a weird month, especially in the UK, because of the ongoing problems with amazon.co.uk. New books didn't sell anywhere near as well as they should have done. Let's hope it is sorted soon. On a brighter note, there will be nee charts for Australia and Canada sometime this summer. I will keep you posted.
Posted by Jon Downes at 2:06 PM No comments:

Dragons are the kings of monsters, more widespread, ancient and powerful than demons, vampires, werewolves or giants. They flap and slither through every culture on earth. They are depicted in cave paintings going back 25,000 years and have been venerated as far apart as Mexico, China and Babylon. Reports of dragon-like beasts still occur today in the oceans and in deep lakes in Asia.

So why is it that the top-dog of the monster world is so poorly served on the big screen? You would think there really would be more films about dragons but the handful that are made are usually mind bendingly egregious. Age of the Dragons is no exception; in fact it is so bad it stands out from the whole shabby crowd as one of the worst outings ever.

The idea is a nice one and if it had been properly approached it could have made a decent film. Age of the Dragons is a retelling of Herman Melville’s classic Moby Dick replacing the great white whale with a great white dragon. Trouble is that it’s not so great and neither is it a dragon. At about 30 feet long it’s bloody tiny as dragons go. The script writers and effects people have also made the same irritating error Hollywood seems to always make when portraying dragons, they only give it two legs. I hate to be a pedant but as a cryptozoologist this really grinds my gears. A true dragon has four legs and two wings. If it only has two legs it is technically a wyvern. A few moments of research can show this but it seems script writers are just too lazy. The same error has been repeated again and again ever since Disney’s Dragonslayer in 1981.

Aside from that there are plot holes that you could get Godzilla’s wedding tackle through.

Ahab (Danny Glover) is badly burn whilst failing to save his sister from the attack of a white dragon in his youth. All his life he has hunted for the beast. Land ships (of which, due to budget restrictions we only see one ridiculously small example of) hunt dragons for the vitriol in their fire glands that is used to light lamps. They use huge cross bows, harpoons and winches in this endeavor and the ships are iron clad to protect the crew from the beast’s flaming exhalations. It is never made apparent how these vastly heavy land ships move or are powered. They look unable to transverse anything more uneven than a glass smooth studio floor.

The hero, Ishmael (Corey Sevier) is joined by a suspiciously small crew including the odious Vinnie Jones as the main harpooner. The only upside to this film is that Vinnie gets toasted early on. Ahab’s adopted daughter (Sofia Pernas) comes on the hunt as the contractually obliged token woman and guess what, she can kick ass! I never saw that coming. Age of the Dragons is achingly predicable and has a standard of acting that would make Rentaghost look like the Royal Shakespeare Company. The one exception is Danny Glover who delvers his lines with real passion but even he cannot save this cinematic dog turd.

It will come as no surprise that the white dragon is harpooned by Ahab and drags him to his doom and that Ishmael and Ahab’s daughter live happily ever after. Surely the creature that decorated the Ishtar Gate, brought live giving rain to China and Japan and was feared across Europe deserves better than this. 0/10

A new genus of plant discovered in South America:

Mountain lions in the Adirondacks:

http://www.northcountrypublicradio.org/news/story/17386/20110328/officially-extinct-mountain-lions-still-haunt-the-adirondacks
Posted by Jon Downes at 1:18 PM No comments:

The saola: rushing to save the most 'spectacular z...
Feds may protect rare sunfish found only in Limest...
Salamander Has Algae Living Inside Its Cells
Gorilla Haven Found in Cameroon

This is one of the better adverts in recent years I think you'll agree:

KARL SHUKER AND THE LOST BIRDS OF PARADISE 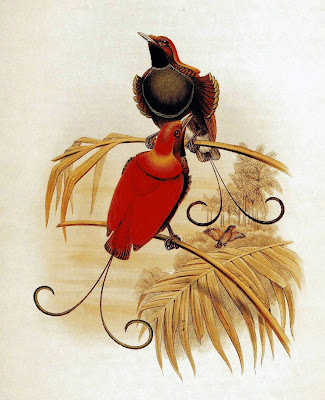