THESE PEOPLE ARE SCUM 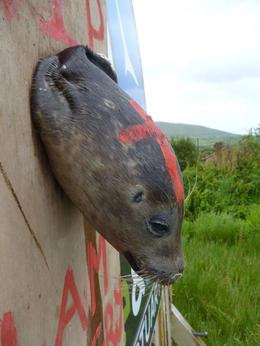 Today Wildlife Extra has posted one of the most upsetting stories I have read in a long time. Apparently, as a protest against their monkfish catch having been predated upon by seals, local fishermen decided to stage their own protest.

"As the staff of international and local volunteers arrived at the Dingle Wildlife and Seal Sanctuary they found the heads of a common seal and a Grey Seal nailed to the entrance sign into the Sanctuary, with the words Cull and RIP written in red alongside."

Whoever is responsible for this are complete scum, and deserve the worst kind of punishment. The only good thing that I can say about the imminent eco-death of the world's oceans is that it will force these filthy people onto the dole. Except that the inate greed of people like them across society has wrecked Europe's financial stability to such an extent that there won't be any dole.

It is time that we, as a so-called civilised society pulled a plug on unsutainable exploitation of what is left of our oceans, and realised that if we as a species are going to survive then we need to change. And if we are going to change then the first thing that we have to do is deal with filth like this.
Posted by Jon Downes at 9:02 PM 2 comments:

On this day in 1949 George Orwell's novel 1984 was published. 1984 shows the fruition of the wet dream of the political right wing so if you're voting in an election this year you might want to think about that.

I hope that everyone will forgive me being in somewhat of a rush this morning, but I have a Doctor's appointment in 40 minutes and I am doing my best to get the Gonzo Daily stuff done before I leave.

First up today is a real exclusive. Finally we have the promo video for 'Pain Killer', the single from Michael Des Barres' forthcoming album 'Carnaby Street'. You heard the song here first months ago, and have been following the progress of the song, video and album, and so today is a very exciting time for me:
http://gonzo-multimedia.blogspot.com/2012/06/michael-des-barres-pain-killer.html

Next, we have another exclusive. In fact I think I shall stop saying that because everything is exclusive today to a greater or lesser degree. Here is part one of an interview with the mighty Judge Smith about the 'Curly's Airships' double CD:
http://gonzo-multimedia.blogspot.com/2012/06/judge-smith-curlys-airships-interview.html

How I nearly get imprisoned in the Tower of London for treason whilst making a Merrell Fankhauser video (OK I exaggerate slightly):
http://gonzo-multimedia.blogspot.com/2012/06/in-which-our-hero-is-once-again.html

And finally, my postbag is interesting again thanks to the lovely Liz Lenten:
http://gonzo-multimedia.blogspot.com/2012/06/my-postbag-gets-interesting-again.html

See you tomorrow when I hope not to be in quite such a rush...
Posted by Jon Downes at 11:39 AM No comments: 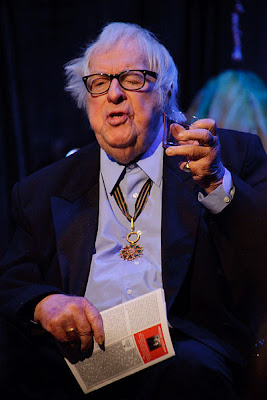 Ray Bradbury passed away on 5th of June in his California home at the grand old age of 91. He was one of the most influential science fiction writers of the 20th century. But it could actually be argued that much of what he wrote was horror and fantasy, rather than hard science fiction in the mould of Asimov. His childhoon influences included Edgar Allen Poe and Edgar Rice Burroughs as well as H G Wells and Jules Verne. He was also greatly effected by early silent horror movies.

Some of his early work was published by companies such as the famous Arkham House (set up to publish H.P Lovecraft’s work after his death) as well as in the pulp magazines of the early 1940s.

His first major work, The Martian Chronicles follows mankind’s collonization of Mars after atomic war has devistated it. The Martian’s themselves are wiped out by germs carried by the invading eathmen, who in time become the new Martians. Bradbury himself insisted that the book was fantasy rather than science fiction.

In, arguably his only hard science fiction novel, Fahrenheit 451 Brabury depicts a near future when books have been outlawed by the anti-intellectual government. TV, radio and other mediums have entirely replaced the written word, and books themselves are burned. The work has a particular resonance as in the real world there seems to be a strong,and growing anti-intellectual feeling. Only recently a report in the UK found that young black men equated intelligence with ‘being gay’. With the government closing library after library and the public seemingly addicted to proletarian reality TV and ‘talent’ shows I would recommend the Fahrenheit 451 sould be on the English syllabus in each and every high school.

Alarmed by the rise of the e-book he once wrote…

His main contribution to cryptozoology was the short story Fog Horn about a sea serpent that mistakes the fog horn on a light house as a mating call. It was the inspiration for the film The Beast from 20,000 Fathoms. The monster in the movie was famously animated by Ray Harrthausen a lifelong friend of Ray Bradbury.
Posted by Jon Downes at 9:50 AM No comments: 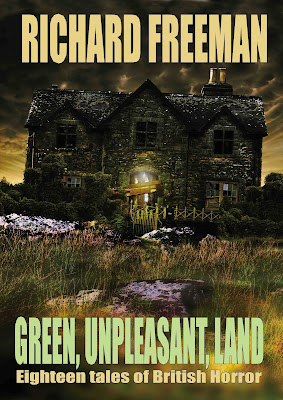 The other day, Alan Friswell wrote this to Richard Freeman:

I visited Ray on Thursday, and gave him your book. He loved it, and asked me to pass this on to you:

'Hello Richard. I was delighted to recieve your book. It was very kind of you to send it to me. Alan tells me that you are involved in zoology as well as writing, and I'm very flattered that you include me in your introduction. It's very gratifying when someone was influenced by our films to be creative in their own lives, as it proves that we were doing something more than just producing an entertaining picture. Thank you again for the book, I will enjoy reading it.'