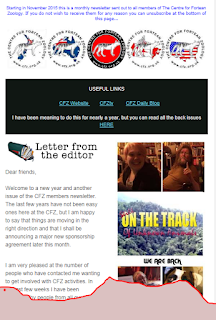 For those of you not in the know, at the beginning of each month we send out a newsletter to all members of the CFZ. The most recent (which went out earlier this afternoon) included articles on OTT, a dolphin in the Thames, the Capcom crypto compy, a mysterious carcass, an exploding ostrich egg fatality, mystery maggots or rats, unseasonable frogspawn, CFZ in the news, yeti hair controversy, BHM Study Group, Ronan, Patreon, a new book on vampires, Notes and Queries etc.

If you want to view a sample issue click here: http://tinyurl.com/pw7rw9l
Posted by Jon Downes at 6:57 PM No comments:

Grab your monster hunting gear, cause Capcom is offering big money for evidence of cryptids

SYFY WIRE (blog)
Cryptids are animal creatures which may or may not be real. Well-known examples include bigfoot and the Loch Ness Monster. According to Twinfinite, Capcom has partnered with Jon Downes of The Centre of Fortean Zoology to judge the entrants. Downes and his team of cryptozoologists will analyze ...
Capcom Will Reward You With $70000 To Hunt Down Monsters Like Big Foot Or Chupacabra - SegmentNext
Full Coverage
Can YOU find proof of Loch Ness Monster? Monster hunters offered £50000 reward
UK News - elBitcoin.org
MONSTER hunters are being offered the chance to land a £50000 reward if they can find comprehensive evidence for the existence of ten famous global beasts, including the Loch Ness Monster and Big Foot....

THE RETURN OF THE GONZO BLOG DOO-DAH MAN