31.
In spite of the fact that some folk think that there is hardly any part of England that has not been built on there are still many places for mystery animals to be found lurking in this green and pleasant land.

There have been reports of creatures ranging from big cats to huge black dogs foretelling doom, and tales of lakes that against all expectations have been reported to contain creatures from crocodiles to mermaids. There are even enough ghostly rabbits to give Elmer Fudd nightmares. However I am going to look at one of those reported sightings of an exotic animal that is just out of place.

Back in 1974 motorist Joan Gilbert was driving along in when she saw a strange animal illuminated in the beam of her headlights, she would recall that ‘it was the most peculiar animal I have ever seen, half cat and half dog. It had stripes, a long thin tail and seemed to be grey… with some yellow on it. Its ears were set back like a member of the cat family, and it was as big as a medium sized dog. It was thin and definitely not a fox.’

On later looking at an animal book while trying to identify the nature of the beast she identified an animal that looked the part: a Thylacine.

Like many mystery animal sightings it does seem to leave more questions than answers. The Thylacine is officially extinct in its native (saying that, there are still reported sightings). As for a population of them living wild in the there has never been a hint of such a thing.

Next stop and another mystery animal to look out for.

Posted by Jon Downes at 4:25 PM No comments:

Once again, sent in by Richard F
A man has been warned by police after he dialled 999 to complain about a prostitute's looks after meeting her outside a hotel.
West Midlands Police said they were contacted by the caller who said he "wished to report her for breaching the Sale of Goods Act".
An officer in the call centre at Solihull, Birmingham, responded by telling the man the woman had not committed any offences and explained to him that soliciting for sex was illegal.
The force has now sent the man a letter warning him about wasting police time.
A spokesman for West Midlands Police said: "A 999 call was received by police at around 7:30pm on Tuesday evening from a man wishing to complain about a sex worker he had met on a hotel car park.
"The caller claimed that the woman had made out she was better looking than she actually was and he wished to report her for breaching the Sale of Goods Act.
Read on...
Posted by Jon Downes at 3:43 PM 1 comment:

THE GONZO BLOG DOO-DAH MAN IN THE SHRUBBERY AGAIN

So July is upon us, and it has been quite an interesting July so far. Prudence and I are alone at the CFZ today. It is Graham's day off, and Corinna has taken mother into Bideford. Pru and I are enjoying the peace and quiet. No news yet from Richard in Sumatra but - unless something amazing happens - I am not really expecting any yet. Carl Marshall has obtained what appears to be a genuine 19th Century British Marten from Dorset. But is it martes or foina? That is the big question. I am agog with anticipation, but in the meantime am still reeling from The Rolling Stones' mighty performance at Glastonbury, and am playing the new albums from Judy Dyble and Holland's Mr Averell to compensate.

*  Jon Downes, the Editor of all these ventures (and several others) is an old hippy of 53 who - together with his orange cat (who is currently on sick leave in Staffordshire) and two very small kittens (one of whom is also orange) puts it all together from a converted potato shed in a tumbledown cottage deep in rural Devon which he shares with various fish, and sometimes a small Indian frog. He is ably assisted by his lovely wife Corinna, his bulldog/boxer Prudence, his elderly mother-in-law, and a motley collection of social malcontents. Plus.. did we mention the orange cat?
Posted by Jon Downes at 2:37 PM No comments:

On this day in 1952 Dan Aykroyd was born. Aykroyd has stared in and scripted several well known films with Fortean theames, including Ghostbusters and Coneheads and is himself a life member and the Hollywood consultant for MUFON as well as being a Spiritualist.


Who ya gonna call? Hopefully not these chumps:
http://www.youtube.com/watch?v=MnyAUXx40tU
Posted by Jon Downes at 2:36 PM No comments: 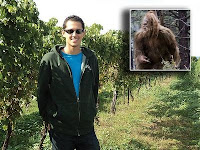