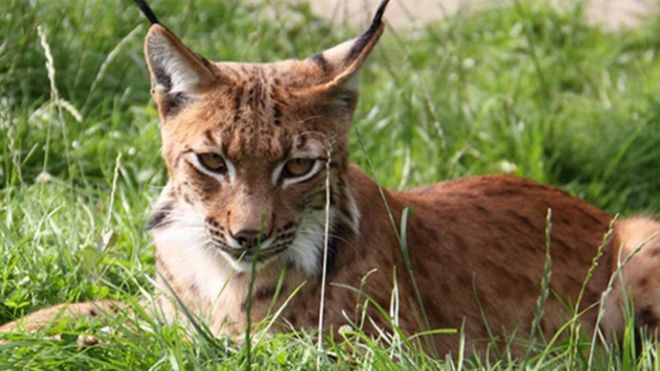 Police have launched an air and ground search for a lynx wild cat which has escaped from a zoo.
Officers have warned people not to approach the animal which escaped from Dartmoor Zoo in Devon by digging itself out of its enclosure.
Children at one school have have been warned to stay inside after police said the Carpathian Lynx could be dangerous if cornered.
It is the size of a large domestic cat and grey and silver in colour.
The zoo took delivery of the animal on Wednesday but on Thursday morning they discovered it had escaped.
No trace of it has been found in the zoo.
Read on...
Posted by Jon Downes at 12:57 PM No comments:

We Now Know Who 'Killed The Loch Ness Monster'

mansworld
This is who's to blame… Nessie's 'corpse' was found last week and this is who 'killed' her. View on FacebookRead Original Article. Tags:Facebook ...
Posted by Jon Downes at 4:00 AM No comments:

Bigfoot Evidence
The bigfoot was breaking open mussels or clams or whatever and then eating them, which made me think 'Who would eat that raw from this dirty river ...

Bigfoot Evidence
From Bigfoot Eyewitness Radio: When tonight's guest, Duane Opczynski, was a kid, he spent a lot of time in wild places, around his home, with friends

Unexplained Mysteries
One of the two men who filmed the infamous Bluff Creek Bigfoot video has long regretted his involvement.

Bigfoot In The Mist

Bigfoot Evidence
Ohio Bigofot Hunter Tim Stover does a little bit of recon of some power line clearings. There have been numerous sighting reports of bigfoot using ...

Bigfoot Evidence
From Parabreakdown on youtube: *note - This video was posted by the late Mitchell Waite. An exam of alleged Bigfoot Footage posted by Bigfoot ...

Posted by Jon Downes at 1:00 AM No comments:

ON THIS DAY IN - 1917 - Aleksandr Kerensky formed a provisional government in Russia.
And now some more recent news from the CFZ Newsdesk