Bill Richard with Trevor Allen, right, and Shannon O'Hare steering from Obtanium Works tow Cecil the Chabot Monster into the boat docks at Lake Chabot in Vallejo. The creation was set afloat as an early April Fools stunt. (Chris Riley/Times-Herald)
A word about cryptolinks: we are not responsible for the content of cryptolinks, which are merely links to outside articles that we think are interesting, usually posted up without any comment whatsoever from me.

It's easy to tell the difference between the monster that lurks beneath Loch Ness in Scotland and the one that was briefly sighted Sunday in Vallejo's Lake Chabot.

"This might not be a real monster," said Shannon Lacy, who watched from the fishing dock as the green monstrosity bobbed on the lake surface.

The artists of Obtanium Works, known for creating their fantastical art cars that have become a staple at both Burning Man and Vallejo events like the Mad Hatter Parade, spent months developing the early April Fools prank.

They even put together a two-page faux history of "The Lake Chabot" creature, which can be traced back to the Spanish Mission era and to the modern day investigation of the "Traveling Academy of Unnatural Sciences -- Cryptozoology Division." Like the Scottish monster affectionately known to locals there as "Nessie," the Lake Chabot monster also has a name.

It seems very quiet here without Lars and the kids. Even Graham is absent (at the Hawkwind one-dayer in Seaton). I am celebrating April Fool's Day by my irregular attempts to get into Depeche Mode. I say irregular, because this is the first time I have listened to one of their albums since the early 90s. However, the reviews of 'Delta Machine' were so beguiling, I had to check it out. But I am sad to admit that although it is more to my taste than other albums of theirs, the synthesisers just grate on me, and all-in-all I just don't get it. Sorry Chaps. I will try again in another twenty years.

*  Jon Downes, the Editor of all these ventures (and several others) is an old hippy of 53 who - together with his orange cat (who is currently on sick leave in Staffordshire) and a not very small orange kitten (who isn't) puts it all together from a converted potato shed in a tumbledown cottage deep in rural Devon which he shares with various fish, and sometimes a small Indian frog. He is ably assisted by his lovely wife Corinna, his bulldog/boxer Prudence, his elderly mother-in-law, and a motley collection of social malcontents. Plus.. did we mention the orange cats?
Posted by Jon Downes at 12:56 PM No comments: 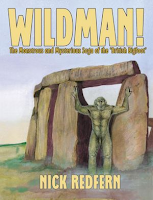 Today is April Fools day so if you have any friends with cats make sure you procure catnip spray from your local petshop as hilarity will occur if you surreptitiously spray it around the seat of their trousers. And now the news:

Here's some good ideas for April Fools pranks (not as good as my catnip one though) :
http://www.youtube.com/watch?v=_rg3ak8SFZc
Posted by Jon Downes at 10:54 AM No comments: