It isn’t that often that you find a cryptozoology-related advert but there are some and one of the best is the dancing dodo.

It all started with the strains of Don Fardon’s cracking tune ‘I’m Alive’ and lo and behold, there pops up a dancing dodo. Short of a juggling great auk, what could be better?

The dodo is one of the better known extinct birds and going from the one in the advert, it was also a great dancer.

Sadly, back in the in the real world the dodo was a bulky flightless bird of the Solitaire family, renowned for its clumsy movements, which would make a dancing dodo rather special; of course nowhere near as special as a living dodo as the last of its kind was reported to have died on Mauritius in the 1690s.

So it would seem rather surprising that there have been a number of reported sightings of this remarkable bird within living memory. The earliest of these sightings date from the 1930s when natives of Mauritius told Lawrence Green that the birds still could be found in caves and mountains in the remote parts of the country.

But there have been further reports not nearly so long ago. In the 1990s there started to appear reports of dodo-like birds walking along the beach in the Plain Champagne area. Whether these sightings consisted of live dodos or a related species is still open to question.

TOADS FROM THE TROJAN WAR 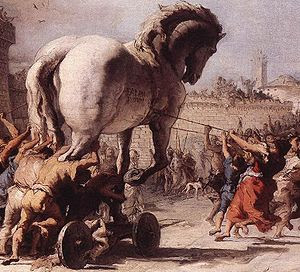 My favourite new blog (new to me not to the blogosphere) is Beachcombing, a history blog that regularly contains articles that would not at all be out of place here. Check this out
Posted by Jon Downes at 10:39 AM No comments:

Email ThisBlogThis!Share to TwitterShare to FacebookShare to Pinterest
Labels: blogging

OLL LOOKS AT AN ENDANGERED GIBBON


Whilst we await news from India, here is another article from Oll about the wildlife of the area.
Posted by Jon Downes at 10:32 AM No comments:

This 3031st collection once again really is a collection of completely uncategoriseable stuff, including Admiral Byrd, flesh-eating bacteria, animal mutes, a stolen tarantula, and the Turin Shroud. It doesn't get much better than this. Good stuff.

While I was researching an article for the India expedition blog I came across an interesting 'feral child' case I had not heard of before. On 13th January 2007 in Ratanakiri, North-Eastern Cambodia a villager noticed that rice was disappearing from his lunch box so he set about finding the culprit. The villager was shocked to see a naked young lady coming up to his lunch box and retreating back to the jungle with some rice. He gathered up some of the other villagers and together they captured the girl. A policeman from Oyadao village named Sal Lou recognised the girl as his missing daughter, Rochom P'ngieng, from a scar on her arm and her facial features. Sal Lou had not seen his daughter since she was 8 and she and her younger sister had gone missing while tending water buffalo in 1988 and would be around the same age as the feral person.

Sal Lou took the girl in to his family and at the time of the discovery planned to undertake a DNA test to prove he was the girl's father, a plan he has since abandoned. When she was discovered she only seemed to know 3 words: “father”, “Mother” and bizarrely “stomach-ache.” She would often try to communicate by gesturing, like pointing to her mouth when she was hungry.

The girl has deep scars around her ankles and wrists, indicating that, rather than having lived wild in the jungle for most of her life, she was kept somewhere against her will by persons unknown. Like many supposed feral children hers may be a story of escaping a situation where she was abused and deprived of human contact while growing up rather than actually being raised by animals.

The girl makes frequent attempts to return to the jungle but is often found some time later near her 'parents' house. On the most recent of these escapes in May 2010 she was found in a toilet pit 100m from her adoptive home 11 days later, having accidentally trapped herself there.

Although Sal Lou and his family has made some progress in teaching the girl some more words and skills since she came to live with them he freely admits that they don't have as much time as they would like to be able to teach her and the mental health NGO Psicologos Sin Fronteras have stepped in to help her reintegration into society.
Posted by Jon Downes at 10:21 AM No comments:

On this day in 1855 David Livingstone became the first European to see Victoria Falls.
And now, the news:

Speaking of dog tricks:
http://www.youtube.com/watch?v=yb8cW6KEiog
Posted by Jon Downes at 10:18 AM No comments: