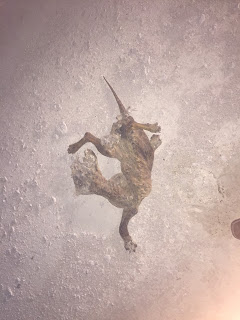 This was the third alleged Blue Dog reported in my area in the past five years".
Posted by Jon Downes at 2:19 PM No comments:

Posted by Jon Downes at 1:36 PM No comments:

THE GONZO BLOG DOO-DAH MAN IS ON A DIFFERENT PATH

You know, I think I see Bigfoot standing

InvestorsHub
You know, I think I see Bigfoot standing there too. Now we know how the plants got harvested in those muddy fields. Big foot's have been known to ...

THE RANTERVIEW: Researcher who claims 30 sightings to speak at Saturday's Big Foot Festival
THE RANT
David Pardue has more than a decade of experience in "Bigfoot field research," and claims to have had as many as 30 encounters with the elusive ...
Posted by Jon Downes at 1:26 PM No comments:

Herald Sun
The Hobart Mercury newspaper reported last month that a team of thylacine trackers released footage of what they believe is proof Tasmanian tigers ...
Posted by Jon Downes at 4:30 AM No comments:

ON THIS DAY IN - 1492 - Christopher Columbus, an Italian explorer, sighted Watling Island in the Bahamas. He believed that he had found Asia while attempting to find a Western ocean route to India. The same day he claimed the land for Isabella and Ferdinand of Spain.
And now some more recent news from the CFZ Newsdesk