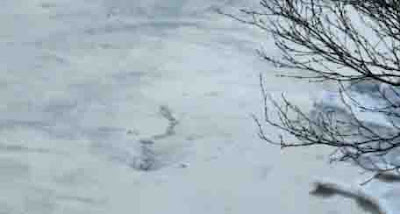 The other day we posted a story about a purported river monster in Iceland. Dale Drinnon was less than impressed and said that in his opinion it was some kind of mechanical construct. Independently, Loren Coleman said much the same thing over on cryptomundo.

I have no axe to grind either way on the subject, although I have to admit that the idea of a mechanical toy wasn't the first thing to come into my mind. However, I was surprised to see quite how many websites now carry the story...

Iceland's Loch Ness Monster? [Video]
Long Island Press
By Maria Vultaggio on February 9th, 2012 We have all heard tales about the Loch Ness Monster: what it looks like, where it lives and of its enormous size. But is sea-serpent actually real? New footage of the sea-serpent has surfaced so you can decide ...See all stories on this topic »

'Iceland Worm Monster': Video Proof of Iceland's Loch Ness?
International Business Times
According to legend, the 25-mile-long 367-foot-deep Lake Lagarfljót is home to the worm, Iceland's answer to the Loch Ness Monster. Tales of Lagarfljót date back to the 14 th century. As the story goes, the monster grew from a tiny worm to a fierce sea ...See all stories on this topic »
International Business Times

Lagarfljot river worm sighting video: Icelandic Loch Ness Monster, or fishing net?3News NZA video which some say proves the existence of Iceland's answer to the Loch Ness Monster has sparked fierce debate in the country. The footage shows what looks like a creature swimming in the Jokulsa River. It is believed, by many, to be a legendary ...See all stories on this topic »
3News NZ

Iceland's Loch Ness Worm Monster Real Or Hoax? Mediaite
By Nando Di Fino
Cryptozoology translates, loosely, into the study of hidden animals. Bigfoot, the Loch Ness Monster, the Chupacabra -- these are the big ones. But what about the minor cryptids? The ones that are the subject of obscure folklore? The Gnome of ...Mediaite

Is This Iceland's Loch Ness Monster? - ABC News
Does the fabled Loch Ness monster of Iceland really exist? Scientists are skeptical. But a new video alleged to have captured images of the monster has gone ...
abcnews.go.com/blogs/.../is-this-icelands-loch-ness-monster/

Iceland's Loch Ness Worm Monster: Real Or Robot? (VIDEO)
Something that looks very much like a giant snake -- or worm -- is slithering its way out of Iceland and causing viral speculation around the Internet.
www.huffingtonpost.com/.../icelands-loch-ness-worm-monster...

Loch Ness Monster in Iceland? Giant Serpent-Like Creature on Video ...
Gather.com
Does Iceland have its own Loch Ness Monster? A video captured a giant serpent-like creature swimming in a Icelandic river giving rise to the comparison. Some people watched the footage, and saw the country's mythical creature called Lagarfljótsormurinn ...

Posted by Jon Downes at 4:23 PM No comments:

On thursday Prudence took me and Corinna for another walk, this time along the lane which leads from Huddisford woods to Ashcroft farm - an area which has had far more than its share of big cat sightings over the past few years. Interestingly, two different mystery cats have been reported over the years; one larger and black, and the other smaller and brown. One one occasion they were seen together.

It is this dichotomy of sightings which is one of the anomalies which has inspired Di Francis to come up with her controversial theory about a putative species of indigenous British big cat - one which exhibits a marked display of sexual dimorphism.

Here we should stress that the hairs found by Andrew Perry et al in 2010 were incontravertably those of a leopard, and furthermore one of the sub-Saharan subspecies. 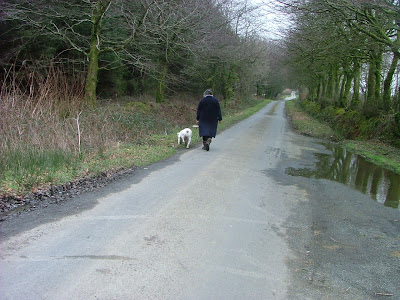 It was still bloody cold as we walked along the lane, but everywhere you looked there were attractive displays of mosses and lichens. I have always been fascinated by these primitive plants ever since when - as a boy on holiday in the New Forest during the winter of 1963/4, my mother used to take me out for walks collecting mosses that she used to put into soup bowls and make into tiny moss gardens. 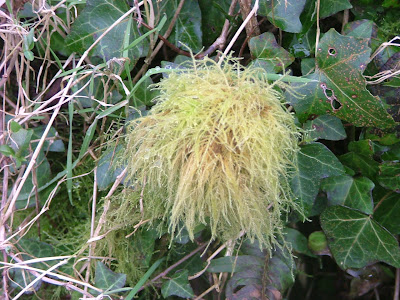 The Huddissford end of our walk leads past a part of the forestry plantation which was felled last year, and it is interesting to see how the newly corrugated terrain created by mechanical diggers, tractors etc is starting to form new ponds. Will they become stagnant and barren? Or will they provide invaluable oasises for the local wildlife. I can't wait to find out.. 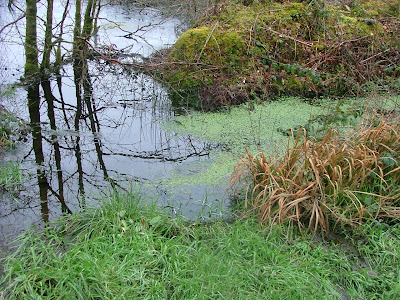 And finally, with all the talk of big cat prints on the blog, here are two footprints from the layby where we parked the car before embarking on our journey. The top one was made by Prudence, the other one not... 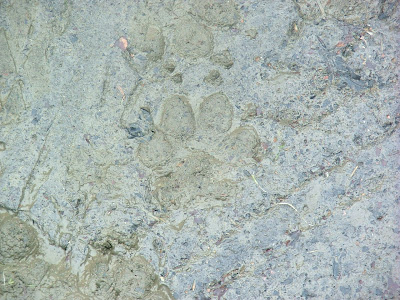 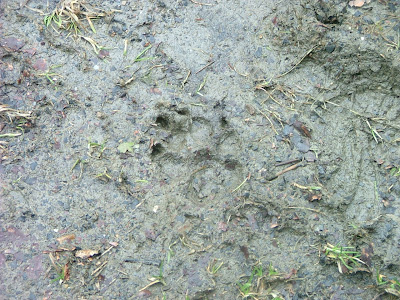 Today's music is pretty obvious really. I can't find a live version of it so you will have to do with the 1977 studio one..

On Tuesday Feb 7th I went to the Local Studies Library and Archives in Bolton,near Manchester to do research for the forthcoming Mystery Animals of Greater Manchester book.

Whilst looking through a scrap book I came across a cutting from around the mid Nineteenth Century,from an un-named Bolton newspaper, concerning a “remarkable discovery” of a stone commemorating the arrival,in Guayaquil, Peru, of some Phonecians in the year 9 or 10 of the reign of Hiram,of Tyre who reigned from 980-947BC and allied himself with King David of Israel, and is mentioned in 2 Samuel 5:11; 1 Kings 5 :1;1 Chronicles 14:1; 1 Kings 9: 13; Amos 1:9 (1) Though to be honest the cutting said he was ruler of Egypt.

One of the most important jobs of the CFZ Bloggo network is to chronicle and preserve all the media accounts of mystery animals from around the world. Some are more important than others, whilst some, I think it is fair to say, are safe to ignore

http://jamaicapondmonster.blogspot.com/
Posted by Jon Downes at 2:33 PM No comments:

http://cryptozoologynews.blogspot.com/
On this day in 1938 the BBC produced the first TV sci-fi series, an adaptation of the play P.U.K. which had coined the term ‘Robot’.

Best robot… Ever:
http://www.youtube.com/watch?v=sQqeidrlDyw
Posted by Jon Downes at 2:21 PM No comments:

There are so many of them now that we feel that we should have a go at publishing a regular round-up of the stories as they come in.

It takes a long time to do, so I am not promising that they will be done each day, but I will do them as regularly as I can. JDForget Gloucestershire big cats - 'lion' spotted near M5
Posted by Jon Downes at 12:17 PM 3 comments:

COLDWATER FISH THAT NEED A LICENSE IN THE UK

I know that quite a few readers are fishkeepers, and if you are over fifty (like yours truly) you probably remember the days when you could buy things like bitterling and bullhead catfish in pet shops. Now you can't. And it is all the fault of Tony Blair...

Image: http://en.wikipedia.org/wiki/File:Ictalurus_punctatus.jpg
Posted by Jon Downes at 12:10 PM No comments: 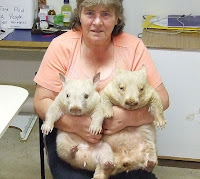 Even by Dale's high standards today's postings are a bumper crop:

New on the Frontiers of Zoology, about that Longnecked seal...
http://frontiersofzoology.blogspot.com/2012/02/longnecked-seals-case-of-miossing.html

also
Not exactly Cryptozoology, but should be of interest to everyone:

New on the Frontiers of Anthropology:
http://frontiers-of-anthropology.blogspot.com/2012/02/controversy-over-oldest-dogs.html

And the next background chunk for Cedar and Willow has also been posted:
http://cedar-and-willow.blogspot.com/2012/02/fantastic-journeys-from-seventies.html
Posted by Jon Downes at 10:59 AM No comments:

The every continuing saga of the south Lakelands big cats took a other turn today.
BBC TV wildlife expert Chris Packham, the presenter of the “ springwatch” programme, today was quoted as stating that, given the terrain of the countryside, in the South Lakelands, and the capacity of big cats to both survive and hide without detection, that a big cat could exist in this area.

For those that believe that such cats do indeed roam this area, then such a statement, from a well-known animal expert, is a very big feather in their caps. At last, the subject seems to be getting the seriousness that it truly deserves.

So, there you go!…Now even then established, well known “experts” are coming around to the same ideas that some of us, have already known for many years..These big cats are really out there!..and have been for many, many years…..
Posted by Jon Downes at 12:29 AM No comments: