CRYPTOLINK: Big shoes to fill ( By the The Discerning Man's Squatch )

Do we as humans have a need to believe in Bigfoot, a creature that is like us in many ways, but chooses to keep its distance from those things we don't even like about ourselves? In a lot of ways that is exactly what Bigfoot is. He is us in antithesis. We attribute to him features that are very human like. He walks upright, he is intelligent, he is a survivor. Unlike us,...he is peaceful, does not fight wars, he does not destroy his environment and he does not have habits that have made us humans weak. He has not been affected by changes in technology and in fact may be exactly as he has always been despite a world that has transformed itself countless times at our hands over the millennia. A creature true to itself and the planet which it and we all call home.

There is much to be valued in a creature like this. It can show us what we have lost in ourselves that we once held very dear. He can give us hope of an unspoiled existence that can still be had. He can teach us to get along with each other for the benefit of everyone, and he can impart to us what it really is to be human and to not take our planet and resources for granted.
I think those who believe and those who want to, look up to Bigfoot as a role model of something we wish we had never lost… but despite our own urging continue to let slip away. We are no longer always a good Sheppard of all that we survey and we have forgotten our own connection to nature in a world that we are as much a part of as our own children are to us.
Read on...
Posted by Jon Downes at 2:00 PM No comments:

The worldwide mystery cat phenomenon (or group of phenomena, if we are to be more accurate) is not JUST about cryptozoology. At its most basic level it is about the relationship between our species and various species of larger cat. That is why, sometimes, you will read stories here that appear to have nothing to do with cryptozoology, but have everything to do with human/big cat interaction. As committed Forteans, we believe that until we understand the nature of these interactions, we have no hope of understanding the truth that we are seeking.

WHY IS THE GONZO BLOG DOO-DAH MAN? (Existentialist Saturday)

www.gonzomultimedia.co.uk/about.html
And so the sun is starting his journey back to us. We sometimes forget how dependent we are upon King Sol. In 1999, for reasons I will not go into here, Uri Geller, Rob Ayling, Richard, Graham and I were on a cross-channel cruise to coincide with the solar eclipse. The ferry was to sail along the line of totality so that we on board could get the best possible view of what was, at least in the UK, a once-in-a-lifetime experience.

As the disc of the sun slowly disappeared I began to feel a very primal panic. I ceased to be an intelligent and reasonably cultured middle-aged writer and surprisingly quickly reverted to being a primal savage. I clutched my then girlfriend's hand and much to my surprise, I found that tears were rolling down my cheeks. I looked around, embarrassed. Even more to my surprise I realised that most of the people I could see were crying. This was just something so completely alien to any of our shared life experience. From our earliest days daytime meant the sun, even if it was hidden behind clouds, and for the first time in any of our lives - and there were about 1500 people on the ferry - the sun had disappeared. The rational part of my brain knew perfectly well that this was only an uncommon astronomical phenomenon. The sun (like it says in the song) had been "eclipsed by the moon" and I knew perfectly well that, in a few minutes, everything would be back to normal in the UK for the next seventy-four years.
However, emotionally I knew no such thing. I was like an ancient savage who believed that the celestial sphere had been devoured by the inexorable force of the daemonic serpent-dragon and in my heart of hearts I was convinced that the sun had gone for good, and that within the blink of a cosmic eye, I, together with all life on earth would shrivel and die away forever.

The worst thing about this sunless world was the strange, colourless half-light. Everything was tinged with a murky and unpleasant shade of puce. It was as if the creator had finally tired of the antics of his unruly and ungrateful servants and vomited back all the collected prayers, hopes and fears of mankind throughout the ages all over the pantheon of his creation. The entire world was the colour of vomit, and for what seemed like a lifetime, although I was in the middle of a crowd of 1500 people together with my then lover and many of my closest friends, I felt utterly desolate in a world that God - or at least the oldest God known to mankind - had deserted.
It was a feeling that I never want to experience again, and it is the reason why I always celebrate today - the day when the sun begins its slow inexorable return.

*  Jon Downes, the editor of all these ventures (and several others), is an old hippy of 54 who - together with his orange cat (who is currently on sick leave in Staffordshire) and two very small kittens (one of whom is also orange) - puts it all together from a converted potato shed in a tumbledown cottage deep in rural Devon, which he shares with various fish and sometimes a small Indian frog. He is ably assisted by his lovely wife Corinna, his bulldog/boxer Prudence, his elderly mother-in-law and a motley collection of social malcontents. Plus... did we mention the orange cat?
Posted by Jon Downes at 1:30 PM No comments:

I have posted notice at all of my blogs that unless Blogger fixes the problem, I shall be forced to discontinue the blogs. We shall see if Blogger takes any reaction from that. In the meantime I have released all the leftover bits and pieces that were being held back for whatever reason, so that I shall not lose whatever I have left in case I want to go back and finish them.
At this point the ball is in Blogger's court and they have done nothing so far.

DAVEY CURTIS CLAIMS THAT THIS IS HIS... 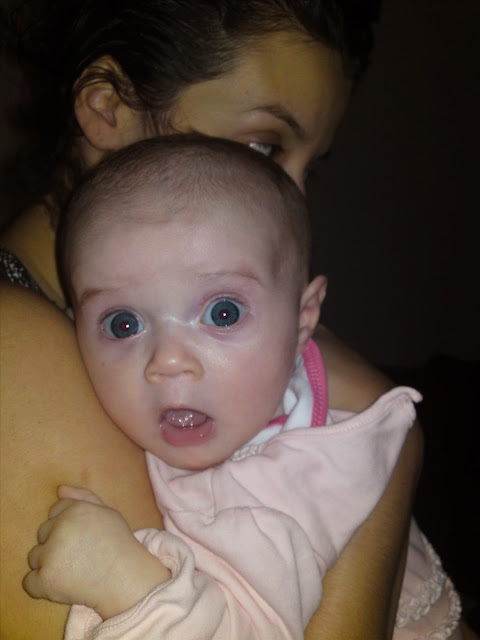 ...granddaughter Amelia's reaction after reviewing Melba Ketchum's bigfoot paper and being informed that some people actually believe her.
Posted by Jon Downes at 12:16 PM 1 comment:

On this day in 1937 Disney's Snow White and the Seven Dwarfs, the world's first full-length animated feature film, premièred in the United States of America.
And now the news:

What a lot of people forget about Disney's Snow White is that it was properly scary; they blank out scenes like this and just remember the twee singing dwarfs:

http://www.youtube.com/watch?v=Z_-pDpLVVNc
Posted by Jon Downes at 9:21 AM No comments: