The other day I was in the Manchester Local Studies Library looking through the `Lancashire Journal` of January 21st 1740 p.3 and found the following:

Portsmouth, Jan 12 Last Thursday a Pair of very large black Eagles settled on an Island called the Binness, belonging to the Estae of Colonel Smith. They seemed to be about four Feet high, as they stood on the Ground. The appearance of these Birds which are very rarely seen in this Country, happened to be observ`d the next Day after the Publick Fast for imploring Success on the present War, occasions various Speculations, and is looked upon as an happy Omen of the Reunion of the Imperial Arms of Germany and Great-Britain, in order once more to check the growing Power, and humble the exorbitant Pride of France and Spain.(1)

Britain declared war on Spain in October of that year.

Now there is a black eagle, Ictinaetus malayensis that soars over the tropical hilly regions of Asia. It breeds in tropical Asia.It is found in Burma and S.China.This does not seem the likely candidate.

I do have a vague memory of Aubrey or Ray talking in the 17th century mentioning vultures in Britain. A Fortean Times report from about Nov 2010 reports recent vultures from Lincs,Oxordshire,Norfolk and Snowdonia.

Agricultural Records by J.M. Stratton says: "The severe spell which started on Dec 24th, 1739, lasted for at least nine weeks, and cold weather continued till late in the spring.” (2) Does anyone know what these birds may have been? SUSANNAH WRITES: Please help me identify a bug I found in The Savernake Forest in Wiltshire, UK.
It landed in the eye of my friend at about 1.30 pm, but it was too small to see if it had wings.It was about 3 mm long, bright green with a brown heart on its back. It was very compact, with its legs right under it.. picture attached..
Posted by Jon Downes at 1:28 PM No comments:

Last month's positions in this pinky colour, which I think is called cerise. April was a spectacularly weird month, especially in the UK, because of the ongoing problems with amazon.co.uk. New books sold practically nothing in the UK, whereas they did very well in the USA. I will be repromoting them now to see what happens. Let's hope it is sorted soon. On a brighter note, there will be nee charts for Australia and Canada sometime this summer. I will keep you posted.
Posted by Jon Downes at 12:13 PM No comments:

http://hauntedskies.blogspot.com/2011/05/jessie-roestenberg-clippings.html
Posted by Jon Downes at 12:12 PM No comments:

On this day in 1979 the nefarious Margaret Thatcher became British prime minister,and proceeded to destroy the mining and manufacturing industries of Britain. Bizarrely the Tories won on a minority of the vote and all parities have done so in every election they have 'won' apart from 2 in the last 100 years. It's crazy when you think about it.

On a lighter note it's Star Wars Day today, so May the 4th be with you.
And now the news:

REPOST: DALE DRINNON: Modifications to the Aquatic Cryptids classifications as proposed by Heuvelmans http://frontiersofzoology.blogspot.com/2011/05/repost-dale-drinnon-modifications-to.html
REPOST: DALE DRINNON: Extractions from Heuvelmans, In The Wake of the Sea-Serpents, "Mistaken Observations" Category
http://frontiersofzoology.blogspot.com/2011/05/repost-dale-drinnon-extractions-from.html
Published with Blogger-droid v1.6.8
Posted by Jon Downes at 11:52 AM 1 comment: 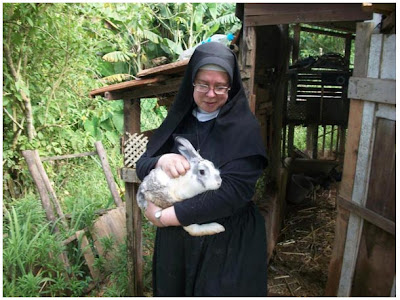 I think people like Sister Michael Marie are the reason God doesn't slap Earth into the Sun and start over.

"Sister Michael Marie, 36, travels the world to do the same for animals that are left alone, injured and hungry after disasters.She has worked on the Gulf Coast and in Chile, Brazil and Japan to serve all of God's creatures, including dogs, cats and other helpless animals. She always wears her full nun's habit, even while helping with a spay or neuter operation."


Published with Blogger-droid v1.6.8
Posted by Jon Downes at 6:08 AM No comments: