Cop a load of this pawprint. According to the website of Houston-based radio station KILT, it was photographed by a man called 'Cowboy Dave' who was walking on his property with his dog called 'Woody' and his pet duck 'Sparkles'. No, I am not making any of this stuff up.

On top of this the coyotes and other wild animals on the ranch have disappeared. Although KILT suggested (tongue in cheek, we believe) that it was a chupacabras, a local wildlife professional identified it as being a wolf print.

As regular readers will know, back in 2010 we visited Texas and spent three weeks investigating the stories of blue dogs in the Lone Star State. We heard lots of accounts of wolves in Texas, which is pretty cool as - according to accepted wisdom - all three sub-species of grey wolf that once lived there, are extinct in the State..

Here is another slice of Mom's home-made evidence pie, suggesting that they are nothing of the sort. "Nowadays, it’s getting a lot easier to prove the existence of monsters and mythical creatures. And if you thought that the Chupacabra and the Montauk monster were just fairy tales, you should know that a mix between the two has been found on the shores of a San Diego beach, and it looks devilish".

Yet another dead carnivore washed up on a beach. Personally I think it is a dead dog. What do You think?

PALAENTOLOGICAL SUGGESTIONS FROM OUR LATEST MEMBER OF STAFF 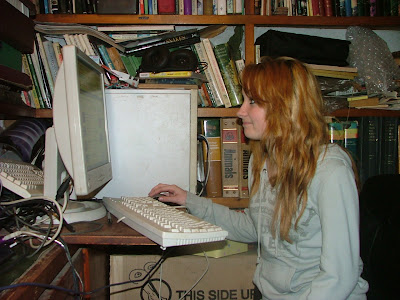 The CFZ welcome their latest member of staff: Ms Jessica Taylor, who spent friday afternoon refurbishing the museum, and scanning in loads of stuff from the pre digital CFZ picture library (which is actually a large cardboard box on the floor of my study).

She expressed a keen interest in palaentology and whilst not familiar with the sterling work of Doctor Naish (although she once made him a cuppa) suggested that we should have a gander at this remarkable encounter with a surviving member of the dinosauridae, thought to have become extinct aeons ago...

Posted by Jon Downes at 6:53 PM No comments:

OCCULT VIEW » » Why Bigfoot is a Troll
If the North American Bigfoot were seen a hundred years ago in Scandinavia, what would they call it? A troll. These beings (trolls/ogres/giants) are written about ..

Just the Facts?: 'Hitting Bigfoot' -- Egg-Laying Rooster -- Half Human ...Last year, around October 22 / 23, BFRO investigator Tyler Bounds from Washington reported that he had hit a Bigfoot while driving near High Knob, VA at ...

Bigfoot Lunch Club: Bigfoot Field Researchers Do Not Collect ...
Collect data, any data. Record what you observe. These are tenets, we believe, are missing in Bigfoot field research. Fiona, in the picture above is a great ...


Bigfoot Trackers Involved In I-4 RV Fire
WESH Orlando
The driver told the fire department that he and his family were on a 36-state tour looking for Bigfoot. Fire officials said the RV was a total loss, but the SUV had only minor heat damage as it was separated immediately from the flaming vehicle.
Posted by Jon Downes at 5:35 PM No comments:

The Wild Frontier is strangely quiet at the moment. Word came through from Nick Redfern that he's been Under the Weather recently (let's hope he gets better soon!) but apart from that there's no news at all from the remoter fringes of the CFZ blogosphere.

If we haven't heard anything by Monday, we may have to send out a search party...
Posted by Andrew May at 1:47 PM No comments:

The tape shows them finding and collecting the sample and there is closeup footage of the Bigfoot steak itself. This videotape will apparently be released at an ...

The Beast of Gumhill – Virginia Bigfoot Sighting and Video ...

Here is a video break down of the Virginia Bigfoot sighting called Beast of Gum Hill. This Bigfoot video was taken by Erik Maximus back in 2009 in the Gum.
Posted by Jon Downes at 1:40 PM No comments:

http://cryptozoologynews.blogspot.com/
On this day in 1979 snow fell in the Sahara Desert for the only time in recorded history.

Simon’s Cat in the snow:
http://www.youtube.com/watch?v=Tuf61OjvoPQ
Posted by Jon Downes at 1:07 PM No comments:

New at the Frontiers of Anthropology:
http://frontiers-of-anthropology.blogspot.com/2012/02/lake-superior-mines-old-copper-culture.html

And at Cedar and Willow, the delayed Samantha Fox eisode (includes videpclip and vidcaps):
http://cedar-and-willow.blogspot.com/2012/02/sammy-is-singer-and-good-one-too.html
Posted by Jon Downes at 10:07 AM No comments:

Over the years, I have penned a number of forewords to other writers' books, the vast majority of which have been, to varying extents, of a cryptozoological nature. However, in recent times there has been one very notable exception to this trend – Nick Molloy's superb book Predator Deathmatch. I soon discovered that not only was it unlike any book that I'd contributed a foreword to before, but it was unlike any book that I'd ever read before – and it thoroughly captivated me.

BIG CAT NEWS: It's all about Gloucestershire

It takes a long time to do, and is a fairly tedious task, so I am not promising that they will be done each day, but I will do them as regularly as I can. JDBy admin
Forget Gloucestershire big cats - 'lion' spotted near M5, CONCERNED callers alerted county police to more than 60 suspected big cat sightings in seven years – including a lion next to the M5 motorway. Gloucestershire Constabulary figures show they received 61 calls about what people believed were big cats in …