Rare European eels from the Mediterranean to Scandinavia make an epic journey when it's time to mate. They leave rivers and brackish habitats, swimming hundreds of miles across the Atlantic to the Sargasso Sea, an open ocean region that is warmer, saltier, bluer and clearer than the surrounding waters.
This trek had remained a mystery to science since no eggs or adult eels have ever been caught in the Sargasso Sea. But researchers recently attached satellite tags to about 600 eels from different places in Europe and were finally able to map the route of the spawning fish.

Email ThisBlogThis!Share to TwitterShare to FacebookShare to Pinterest
Labels: eels 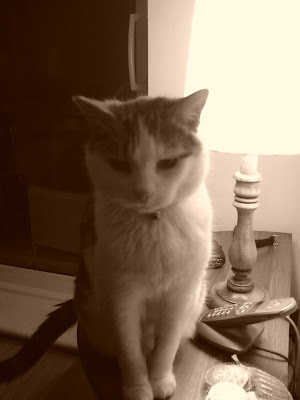 As you know our beloved cat Pringles (left) had to be put to sleep yesterday as she had become very ill and could not eat, drink or walk anymore. As you can imagine we were all very sad and feeling a bit down in the dumps but today a little furry angel in the shape of a tom cat from across the street came to cheer us up. We had gone out shopping and when we returned Samson (we found out later that is his name) came across the road meowing and wanting to be made a fuss of.


He had just moved into his new address and had come to pay his condolences. It was just what we needed. We fussed over him and then he went and lay down where Pringles used to lie next to the radiator. We had a word with his owners and explained the situation and they said as long as he wasn't a nuisance he could stay for while. Samson (below) the bereavement-counselling cat! It's as if some one up there knew we needed a bit of help at this sad time and sent him to cheer us up a bit. It's a funny old world! 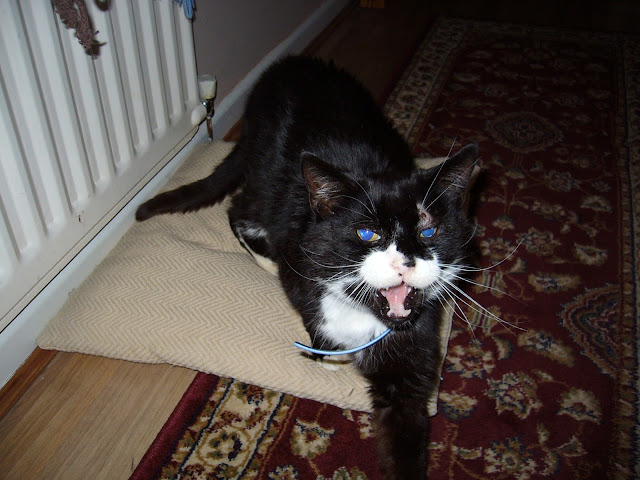 At half past five to bed I crept

*  The Gonzo Daily is - as the name implies - a daily online magazine (mostly) about artists connected to the Gonzo Multimedia group of companies. But it also has other stuff as and when the editor feels like it. The same team also do a weekly newsletter called - imaginatively - The Gonzo Weekly. Find out about it at this link:  http://gonzo-multimedia.blogspot.com/2012/11/all-gonzo-news-wots-fit-to-print.html

*  Jon Downes, the Editor of all these ventures is an old hippy of 53 who - together with his orange cat - puts it all together from a converted potato shed in a tumbledown cottage deep in rural Devon which he shares with various fish and batrachians. He is ably assisted by his lovely wife Corinna, his bulldog/boxer Prudence, his mother-in-law, and a motley collection of social malcontents. Plus.. did we mention the orange cat?
Posted by Jon Downes at 11:57 AM No comments: 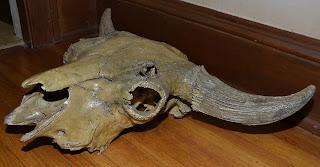 Long story short. My parents are aging and divesting unwanted possessions. So today I took possession of an ancient bison skull my mother acquired many years ago. It turns out this bison skull dates back approx. 10,000 years or so, which brings it into the end of the last North American ice age. For years I never gave this object a thought, until today.

Upon closer examination it became evident that this poor old beast was the victim of a horrible tussle, as best I can surmise based on a wicked wound over the left eye socket. The obvious evidence appears to be a wound from an opposing male in rut. There is a gaping hole to the skull above the left eye, which upon close inspection appears to have become infected. I can only guess that this majestic beast died a slow, horrible death. 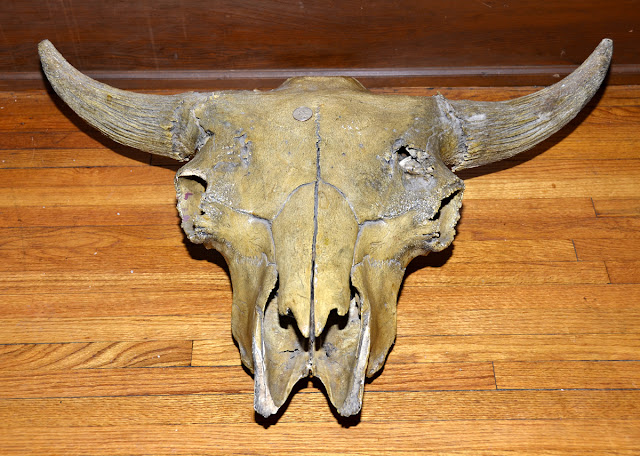 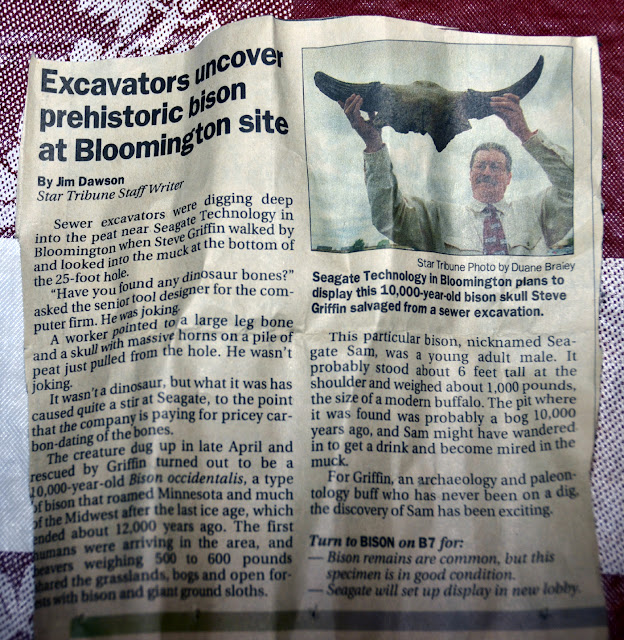 Nonetheless, a brilliant view to the past.
Posted by Jon Downes at 11:06 AM No comments:

On this day in 1930 Buzz Aldrin, the second man on the Moon, was born
And now the news:


A giant leap for Mr Gorsky (a great urban myth, this is one of those things you wish was true but sadly is not) :
http://www.youtube.com/watch?v=a6PoXkUkTYA
Posted by Jon Downes at 10:56 AM No comments: