Juvenile Bigfoot Tracks Photographed
Bigfoot Evidence
Hello everybody! In part 5, it's all about the possible juvenile Bigfoot tracks! We take you to the lake for some exploring, where we see numerous ...

Bigfoot Encounter from Frosted Forest Sasquatch (Video)
Before It's News
This is my recollection of a recent sasquatch encounter where I was lucky enough to witness one running very close to me. I startled it with my ...

Bigfoot Investigator Becomes Unnerved As Creatures Splash Around In Creek
Bigfoot Evidence
Robert Dodson strains to catch a glimpse of what's splashing around in the creek at an area bigfoot was seen just a week ago. While he has his ...

Bigfoot: Is this strange creature captured on video in Indonesia the real thing?
Stuff.co.nz
A strange video of a large creature walking in a jungle has Bigfoot hunters excited. Footage shot in Indonesia and posted to YouTube appears to show ...

Ron Morehead: Sounds of Bigfoot (Video)
Before It's News
Appearing with Connie Willis for the full program, Ron Morehead, adventurer, author and Bigfoot expert, will discuss how he witnessed, recorded, and ...

Elk Hunters Surprised By Sasquatch
Bigfoot Evidence
The RMSO take a look around the Thousand Peaks ranch, where elk hunters had a run in with a bigfoot. The area is rich with bigfoot sightings, and ... 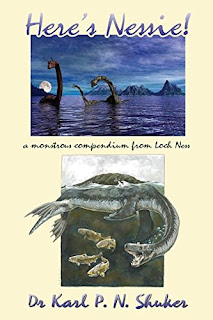 At long last we are proud to announce the arrival of the new book by Dr Karl Shuker.
The Loch Ness monster is undoubtedly the best known unknown animal in the world of that is not too much of an oxymoron. Here, for the first time is gathered together a book-length collection of articles written by Dr Shuker about Nessie over the years. He writes:
“Nessie the Loch Ness monster (LNM) is not only the premier mystery beast of the United  Kingdom, it also vies with the bigfoot or sasquatch as the most famous one anywhere in the world. Little wonder, therefore, that during his many years as a world-renowned crypt
ozoological researcher and writer, Dr Karl Shuker should have documented it and all manner of aspects relating to it in a wide range of publications
Now, however, for the very first time and in direct response to popular demand, all of Dr Shuker’s most significant but previously disparate Nessie-themed writings have finally been brought together, and in expanded, updated form whenever possible too, to yield the present LNM compendium, covering a fascinating, extremely broad spectrum of pertinent topics.

http://cfzresources.com/publishing/2016/10/dr-shukers-loch-ness-monster-book-is-here/
Posted by Jon Downes at 3:40 PM No comments:

ON THIS DAY IN - 1931 - Al Capone was convicted on income tax evasion and was sentenced to 11 years in prison. He was released in 1939.
And now some more recent news from the CFZ Newsdesk