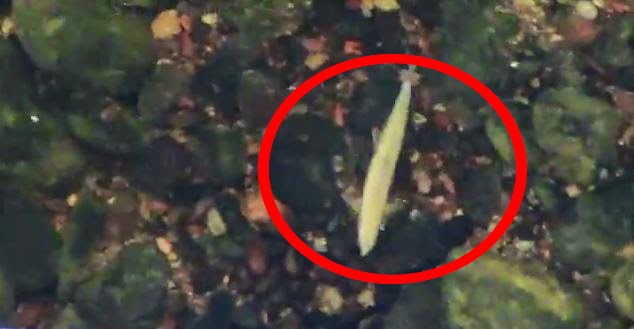 So it might not be quite as rare as a bigfoot, but check out this albino salmon a man filmed in its natural habitat. As a bonus, he also got some footage of a bald eagle. I wonder if they taste any different. The fish, not the eagle. Check it out:

http://bigfootevidence.blogspot.co.uk/2014/06/watch-man-films-rare-albino-kokanee.html?utm_source=feedburner&utm_medium=feed&utm_campaign=Feed:+BigfootEvidence+(Bigfoot+Evidence)
Posted by Jon Downes at 3:18 PM No comments: 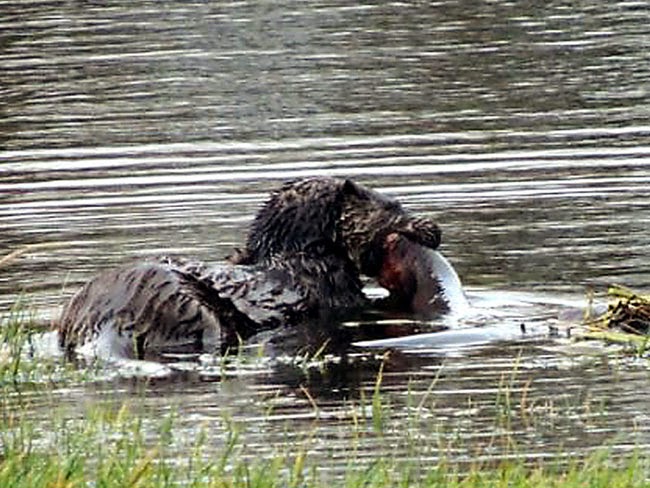 Bigfoot Evidence - Blogger
Not many things have caused more dissension within the bigfoot community than the theory proposed by MK Davis that a bigfoot "massacre" took ...

How To Bigfoot Hunt - Getting Started & Basic Equipment

Bigfoot Research News
Bigfoot researcher River Gibbs gives a presentation on how to get started with Bigfoot research and the basic equipment that you will need when you ...

Bigfoot Evidence ⋅ Shawn
We saw something in the trees so we turned around as quickly as possible. We captured this footage of what might be a bigfoot or sasquatch

The Truth About Bigfoot: Gigantopithecus and Other Fun on the Scientific Fringes

Sketchy Science
With that in mind, I have to stop where we are and say that there is no scientific evidence that Bigfoot is real or that any large ape has ever lived in ...

Does The Figure In The New Provo Canyon Footage Look a Bigfoot or a Bear?

Bigfoot Evidence - Blogger
In cased you didn't see yesterday's post on the new Provo Canyon Bigfoot footage, here's Phil Poling's commentary on the video. According to the

Look at This Drawing of Bigfoot by Eye Witness

Bigfoot Evidence ⋅ Matt K.
This is an interesting first-hand report of a bigfoot encounter. What makes it the most interesting is the details the witness provides about how the ...

Is this a Bigfoot Watching RMSO Investigate Its Sighting?

Bigfoot Evidence ⋅ Shawn
After interviewing the witness at a 3 day old Bigfoot sighting location, RMSO investigator Kelly Shaw zooms in on a black object that stands out from

Bigfoot Evidence - Blogger
ParaBreakdown takes a look at the new Sundance Utah bigfoot footage, and gives us a better look at it as well. Check out his zoomed and stabilized ...

Kijiji
I am looking to gather 3-4 men to go on a week long hunt to find BIGFOOT! I am extremely good evidence I have narrowed his location to a remote ...

Cryptomundo
This may be the first recorded evidence of Bigfoot. It shows a curious creature hopping from rock to rock in the snowy Rockies. Enough to convince this

Bigfoot Research News
This is the original video of an alleged Bigfoot that was filmed near Sundance, Utah. Sundance is not that far from the infamous Provo Canyon sighting

Team Tracker Bigfoot NEWS - Blogger
Bigfoot In Detroit? You're a nice family driving through the outskirts of Detroit, shopping for a new house. What you don't expect to see on
Posted by Jon Downes at 1:07 PM No comments:

THE GONZO BLOG DOO-DAH MAN ISN'T WELL, HE STAYED BACK AT THE HOTEL

The latest issue of Gonzo Weekly (#82) is here to read or download at www.gonzoweekly.com. It has the Wally Hope on the front cover and features an interview with Dean Wally, who is the current custodian of his ashes. There is an exclusive review of Yes on the Cruise to the Edge, with previously unpublished pictures. There is news of Mick Abrahams' new album which features guest appearances by a Stone, a Mann, and a Whitesnake, and there are pictures of Genre Peak in the studio. There is an in depth look at a new book about the idiosyncratic 4AD records, and a drunken ramble about Rik Mayall that dictated at 4:00am the other day with the best part of a bottle of bourbon inside of me. There are also new shows from the peculiar multiverse of Sub Reality Sandwich, from Canterbury Sans Frontières, from Friday Night Progressive, and from the multi-talented Neil Nixon at Strange Fruit and a collection of more news, reviews, views, interviews and Gilbert's Potoroos (OK, no specimens f Australia's rarest mammal, but I got carried away with things that rhymed with OOOOS) than you can shake a stick at. And the best part is IT's ABSOLUTELY FREE!!!
Read the previous few issues of Gonzo Weekly:
Issue 81 (Pam Windo cover)
http://gonzo-multimedia.blogspot.com/2014/06/gonzo-weekly-81.html
Issue 80 (Spirits Burning cover)
http://gonzo-multimedia.blogspot.com/2014/05/gonzo-weekly-80.html
Issue 79 (Steve Ignorant cover)
http://gonzo-multimedia.blogspot.com/2014/05/gonzo-weekly-79.html
Issue 78 (H R Giger cover)
http://gonzo-multimedia.blogspot.com/2014/05/gonzo-weekly-78_17.html
All issues from #70 can be downloaded at www.gonzoweekly.com if you prefer. If you have problems downloading, just email me and I will add you to the Gonzo Weekly dropbox. The first 69 issues are archived there as well. Information is power chaps, we have to share it!
To make sure that you don't miss your copy of future issues make an old hippy a happy chappy and subscribe
http://eepurl.com/r-VTD
*  The Gonzo Daily is a two way process. If you have any news or want to write for us, please contact me at  jon@eclipse.co.uk. If you are an artist and want to showcase your work, or even just say hello please write to me at gonzo@cfz.org.uk. Please copy, paste and spread the word about this magazine as widely as possible. We need people to read us in order to grow, and as soon as it is viable we shall be invading more traditional magaziney areas. Join in the fun, spread the word, and maybe if we all chant loud enough we CAN stop it raining. See you tomorrow...

*  Jon Downes, the Editor of all these ventures (and several others) is an old hippy of 54 who - together with an orange kitten named after a song by Frank Zappa puts it all together from a converted potato shed in a tumbledown cottage deep in rural Devon which he shares with various fish, and sometimes a small Indian frog. He is ably assisted by his lovely wife Corinna, his bulldog/boxer Prudence, his elderly mother-in-law, and a motley collection of social malcontents. Plus.. did we mention the orange kitten?
Posted by Jon Downes at 12:32 PM No comments:

On this day in 1954 the actor Miles O'Keeffe was born. O'Keeffe is best known for his role as Tarzan but other credits include the Ator films and Clawed: Legend of the Sasquatch.
And now the news:
How much Keeffe is in this movie, anyway?
http://www.youtube.com/watch?v=e1y4ffWYEss
Posted by Jon Downes at 8:21 AM No comments: