HOPPING WITH REUBEN AND THE JETS

https://gonzo-multimedia.blogspot.com/
I have bad news, I’m afraid. Whereas Corinna’s appointment on Friday gave us more information about her forthcoming operation, it didn’t break much new ground. However, when we got home it was obvious that mother had gone downhill fast. We called an ambulance, and mother and Corinna went off to Barnstaple. She was eventually admitted to the medical assessment unit sometime after midnight. We went to see her yesterday, and I spoke to the staff nurse on duty just now. She is stable though frail, and is unlikely to be discharged before the middle of the week.
Please remember us all in your thoughts and prayers. 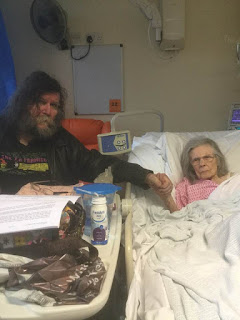 ON THIS DAY IN -  1890 - Polygamy was outlawed by the Mormon Church.
And now some more recent news from the CFZ Newsdesk