This is an appeal particularly aimed at our American and Canadian readers. I am trying to gather together between 20-30 trail cameras. These are far more widely used in the US and Canada, especially by hunters. The CFZ being the CFZ I want them as cheaply as possible. I am wondering if you all could scour your local second hand (preowned) shops, and the adverts in your local paper. I need as many dirt cheap cameras as possible. Please email me and let me know what you find, and if we can afford it then I will paypal you the money.


They are initially to be used in Huddisford Woods, to see if we can get a picture of the pantherine fellow who has so obligingly left his hairs for various folk to find. Then, sometime next year we intend to ship them to Sumatra to see if we can make a concerted effort to photograph Orang Pendek in his/her nattural habitat.
Posted by Jon Downes at 11:37 AM No comments:

WHAT IS HAPPENING HERE? 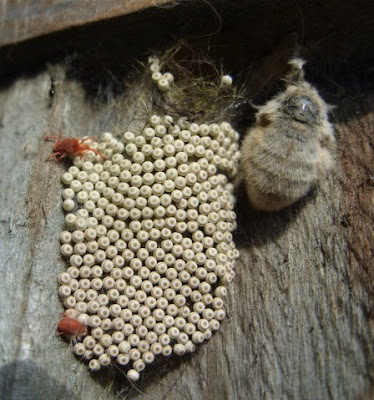 Is anyone able to tell me what’s happening here? I found this wingless female moth with its eggs on my garden fence yesterday. I’m assuming this is a vapourer moth, although I understand there are several other wingless species. But there are two red velvet mites in the picture also. Are they eating the eggs?

Personally I have absolutely no idea. I have always been fascinated by the moths that have such severe sexual dimorphism that the females are flightless and only have tiny vestigial wings. There are actually quite a few of them in the UK, so I pinched the following list from here. 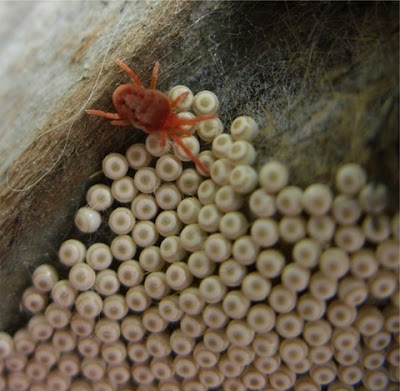 NEIL ARNOLD: Phantom Insects and Others Part One

The realm of the paranormal has no boundaries. Apparitions appear in all shapes and guises, and supernatural activity can centre upon a multitude of forms. It’s not unusual for there to be ghostly vehicles, and buildings, let alone people. The animal kingdom is also not excluded when it comes to phantoms. Sightings of unusual insects in places they shouldn’t be are not uncommon, but reports of phantasmal creepy crawlies are another thing entirely. One of the most intriguing and known cases concerned the Borley ‘bug’, a hideous form observed in one of Britain’s most haunted buildings, Borley Rectory which sat on the Essex/Suffolk border until it was destroyed by a fire in 1939. Artist Margaret Wilson encountered the critter on 22nd August 1938 whilst she was painting and stated:

"Looking up I saw the queerest object with impelling eyes advancing toward me at about eye level. It seemed to be coming out of a mist. It was accompanied by a wasp on its left..."

Margaret struck at the creature but when it hit the floor it disappeared. After the incident she claimed it was around three-inches long, entirely black with huge eyes and resembled no other British insect. Of course, this could simply have been an alien species making its home in the UK, or larvae she did not recognise but the Awd Goggie, a ghostly insect, echoes the Borley creature. It is said to resemble an over-sized caterpillar and haunts orchards as a ‘nursery bogie’, used to warn children away from areas where fruit is ready to fall. Most of us have an inner dread of insects and the thought that such bugs and beetles may be scurrying through our clothes, or drinking our blood as we sleep is a chilling thought. The Murony of Wallachain folklore is believed to be a sinister supernatural insect. This is a blood-drinker said to also take the form of a hag-like figure, and is perceived as a bad omen. In Samoa the ghastly Nifoloa is said to be a devious spirit said to hunt lonely travellers and kill with one nip from a single tooth which projects from its mouth. Although the Nifoloa is only small, its tooth measures around three-inches.

In Japanese lore a phantom insect resembling a tadpole is known as the Ashimagari. It is a trickster spirit in that it often appears to weary travellers as they stroll on remote lanes of a night. It is said that should a rambler step on one of these insects then their feet would become entangled in a thick, cotton-like material. However, this is not harmful but seems to take place only to way-lay those eager to get home.

During the tenth century a giant, spectral centipede was said to have terrorised the community of Lake Biwa, Japan. The multi-legged monster was slain by General Fujiwara Hidesato. For his heroics, Hidesato was bestowed a self-replenishing bag of rice which would feed many generations to come. In Japan there also exists the ‘earthquake beetle’, or Jinshin-Mushi, a bad omen if ever there was one, for should this ten-legged insect appear, then destruction is imminent. Many such foreboding insect spirits are considered omens of misfortune.
Posted by Jon Downes at 10:56 AM No comments:

HOW DO I SUPPORT MYSELF?

The question of how I support myself and my wife has risen once again. I have answered this elsewhere (not that it is any business of anyone apart from me and those jolly nice fellows at the Inland Revenue). However, for those who have not seen my keynote speech at the Weird Weekend:


I have an occupational pension from my days as a nurse for the mentally handicapped, I have a small but adequate private income partly inherited from my father, and I am in receipt of two non-means tested disability benefits which allow me to do small amounts of paid work occasionally. I fill in my tax returns like a model citizen (actually Graham does them for me because I find the whole thing unutterably complicated) and although it would be nice to have more money than I have, we do have enough for our relatively modest (especially since I quit smoking 20+ fags a day) needs.
Posted by Jon Downes at 10:46 AM 4 comments: 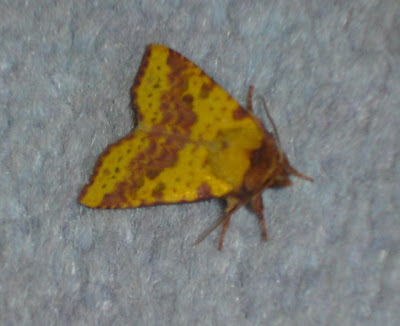 Yesterday we posted this picture with a request for an ID . This was originally posted by Paul Batty to members of the increasingly excellent Entomological Livestock Group.


Thank you to everyone who correctly identified this moth as a Pink barred Sallow (Xanthia togata). I think that one of the things that is most endearing about the study of British moths is that they have such beautifully romantic names...
Posted by Jon Downes at 10:41 AM 1 comment:

PART 1: THE RAINBOW SERPENT
Pre-eminent in the pantheon of mythical beasts is the Rainbow Serpent. This is a gigantic snake with multi-hued scales. During the Dreamtime or Altjeringa, an infinite spiritual cycle that exists outside of normal time, the Rainbow Serpent created river and waterholes as it crawled across the land. The Rainbow Serpent is liked to rainfall and the control of water in the same way Asian dragons are.

The Rainbow Serpent has many names in different parts of Australia; these include Borlung, Ngalyod and Wonambi. This last name was incorporated into the scientific name of a giant Madtsoid snake Wonambi naracoortensis whose fossils have been found at Naracoorte, South Australia. This huge snake live fairly recently and would have been known to early Aborigines. It has been postulated that it may have been the inspiration for the Rainbow Serpent. It grew to around six meters long. Another candidate at ten meters was Bluff Downs giant python Liasis dubudinala although at 4.5 million years old it lived well before the time of modern humans. Early Aborigines may have unearthed its fossil bones however. Another giant Australian python was named Montypythonoides riversleighensis. This nine metre snake lived even earlier at 15 million years ago.
Posted by Jon Downes at 10:36 AM 1 comment:

On this day in 2004 the asteroid 4179 Toutatis passed within 4 lunar distances of the Earth, which is pretty close. If you think that's close though it is possible that next time it passes the Earth it could be just over two lunar distances away...
And now, the news:

Tenuous link but, one of our most charming native mammals in Britain is the hedgehog which gives me a good opportunity to link to one of our news blog editor Gavin Wilson's great hedgehog videos:
http://www.youtube.com/watch?v=D5hJnwqgjVs
Gavin's hedgehog blog can be found here: http://snufflehog.blogspot.com/
Posted by Jon Downes at 10:32 AM No comments:

CHRISTOPHER COLUMBUS AND THE SKINNED SERPENT

Another massively intriguing bloggo from Karl Shuker....
Posted by Jon Downes at 10:30 AM No comments: