Is this another mark of the Calderdale catbeast?

Could this be the mark of Calderdale's catbeast? The apparent paw print was found by Malcolm Edwards, of Jumples Lodge, Halifax

THE mystery of the Calderdale catbeast took a new turn with the discovery of this huge paw print.

It is the second time the big cat – thought to be a black panther like the one above – has left its mark in the ground. The latest print was found in the mud by Malcolm Edwards outside the garage of his home in Wheatley, Halifax. The 67-year-old said: “It was fairly dark so I had a torch with me. As I shone it down at the ground, there it was.

“It certainly looks like a paw print but what sort of a paw, and from what, I don’t know. The thing that intrigued me is cats have retractable claws and there are no claw marks on the print.”

The print measures about four inches across and is the only one Mr Edwards found. It may have been there some time, as the ground has been frozen hard for days. Mr Edwards said he had not heard or seen anything out of the ordinary, but was open to the possibility it could be a big cat.

In November, Susan Rooke reported seeing a black, puma-like animal scrabbling in her garden at Chevinedge Crescent, Exley, before jumping over a fence. The creature left behind a similar paw print and scratch marks. The 58-year-old told the Courier of her terror at the time.

“My heart was in my mouth. I had never seen anything like that in my life, in all my years.

“When I saw the claw marks I thought I wasn’t dreaming. I thought ‘My God, it really was here’.”

The first possible physical evidence of the Calderdale catbeast was in 2005 when a Shibden farmer discovered the savaged remains of a sheep. Elsewhere in the UK, there has been solid evidence that big cats have roamed the countryside. A puma was captured alive in Scotland in 1980 and a jungle cat was found on a Shropshire roadside in 1989 after it was hit by a passing car.

Closer to home, the Beast of Ossett was filmed prowling near woodland on the edge of the town in 1999. Special Constable Phillip Sanderson, wildlife officer for Calderdale, said the pictured print did look feline.

But he added there was not yet enough evidence to confirm or reject the existence of a big cat here. He said: “We have had sporadic sightings of an animal nicknamed the catbeast of Calderdale.

“Unfortunately a lot of the sightings are inconclusive.

“If such an animal exists it appears to be surviving on the availiable ground game as the police have had no reports of domestic livestock loss.

“If anyone was to see an animal of this description, do not approach but contact the police.”

http://www.halifaxcourier.co.uk/news/local/is_this_another_mark_of_the_calderdale_catbeast_1_4223679
Posted by Jon Downes at 1:14 PM No comments:

On this day in 1943 movie actor Joe Pesci star of the extremely bizarre and unintentionally funny Moonwalker (and the better films “Goodfellas”, “Home Alone” and “My Cousin Vinny”) was born. His character in Moonwalker had an evil plot to hide drugs in spiders and sell them to kids so the spiders would bite them and get the kids hooked on crack or something, thankfully Michael Jackson saved the day by transforming into a car and then a spaceship (okaaay…).

“Like a clown, funny?” Pesci’s most famous scene from Goodfellas (WARNING: contains cuss words that may cause you to run from the room covering your child's ears whist weeping for their lost innocence and vowing to write a strongly worded letter to your local MP if you are a bit prudish and genuinely believe they do not hear much worse every day in the school playground) :
http://www.youtube.com/watch?v=o_ff46b58Hk
Posted by Jon Downes at 12:58 PM No comments: 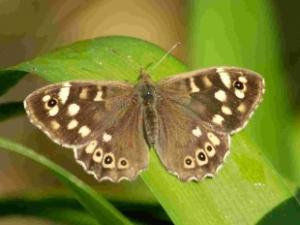 Many thanks to Kithra for sending this story which BTW came in before the recent cold snap:

A Falmouth wildlife photographer has snapped a butterfly in his garden – a full two months before the creatures normally emerge for the spring. Steve Ogden snapped the image of the Speckled Wood butterfly – and says it is the latest example of how the extremely mild winter is confusing our wildlife.