*  Jon Downes, the Editor of all these ventures (and several others) is an old hippy of 54 who - together with his orange cat (who is currently on sick leave in Staffordshire) and two very small kittens (one of whom is also orange) puts it all together from a converted potato shed in a tumbledown cottage deep in rural Devon which he shares with various fish, and sometimes a small Indian frog. He is ably assisted by his lovely wife Corinna, his bulldog/boxer Prudence, his elderly mother-in-law, and a motley collection of social malcontents. Plus.. did we mention the orange cat?
Posted by Jon Downes at 11:01 AM No comments: 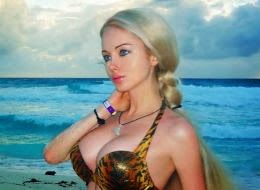 CRYPTOZOOLOGY ONLINE: On The Track (Of Unknown Animals) Episode 78

The latest episode of our monthly webTV show from the CFZ and CFZtv, bringing you news on our activities within cryptozoology and natural history as well as the latest cryptozoological, and monster hunting news from around the world. I can't believe that we have done this every month for over six years now - 78 episodes. Golly!

On this day in 1845 Johnny Appleseed died. Appleseed became a folk legend in the USA due to his habit of planting tons of apple tree nurseries there and is thought of, by some Americans, as a great environmentalist, which is ironic as he was planting loads of non-native tree species which is actually very bad for the environment, and mainly for his own profit at that.

http://www.youtube.com/watch?v=VmRe_fK7pbw
Posted by Jon Downes at 9:00 AM No comments: