Here just a few parish notices concerning our publication schedules. First of all, you’ll have noticed that the new issue of Animals & Men is marginally late. This is purely because of time constraints, but it should be out today or tomorrow.

As of the current issue of the CFZ Monthly Newsletter, if the first of the month takes place over a weekend, then the newsletter will be mailed out on the following Monday. If that Monday is a public holiday, we shall make it up as we go along; a system that has worked fine for the CFZ over the past 25yrs.

Bigfoot Evidence - blogger
On a recent trip to Southern Iowa, a group of bigfoot investigators witnessed a small family unit of bigfoot at close range. 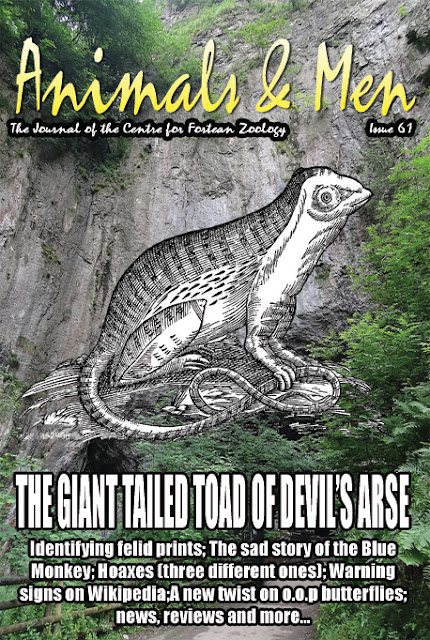 THE GONZO BLOG DOO-DAH MAN IS HERE OR THERE

Animals That Have Gone Extinct In The Last 150 Years, Thanks To Hunters

International Business Times
Also known as thylacine or a Tasmanian wolf, the creatures were sandy-colored with dark stripes on their backs and were about 4 feet long if you ...
Posted by Jon Downes at 3:30 AM No comments:

ON THIS DAY IN - 1852 Frederick Douglass, fugitive slave, delivers his 'What to the Slave Is the Fourth of July?' speech to the Ladies' Anti-Slavery Society in Rochester, condemns the celebration as hypocritical sham
And now some more recent news from the CFZ Newsdesk

AND TO WHISTLE WHILE YOU WORK... (Music that may have some relevance to items also on this page, or may just reflect my mood on the day.)