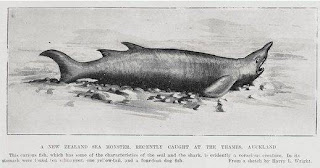 Please can anyone identify this shark-like animal, washed ashore in New Zealand IN 1901? I have permission from the Sir George Grey Special Collections,Central City Library,. Ref: AWNS 19011031-7-2  Darren Naish wrote about 2 finned cetaceans in Animals & Men no. 11 but I saw no mention of this animal there

NEW YORK, New York— July 11, 2013— Sunday, July 14th, CBS will rebroadcast ‘The Race To Save The Tortoise’, a 60 Minutes segment that profiles the work of Eric Goode and the Turtle Conservancy.  Originally broadcast on December 9, 2012, it shed light on the plight of turtles and tortoises that have existed over 200 million years and now find themselves on the brink of extinction due to illegal trade and poaching. The re-airing of The Race To Save the Tortoise will broadcast on CBS stations on Sunday, July 14th, 7pm EST/ 8pm CST. In the ensuing seven months the Turtle Conservancy has made broad strides in its mission to save endangered turtles and tortoises.  Some highlights include:

This year the TC is supporting projects on the ground to protect endangered turtles and tortoises in China, Guyana, India, Mexico, Madagascar, Nicaragua, Pakistan, South Africa, and the USA, and has conducted fieldwork around the world, particularly in Southeast Asia, investigating the turtle and tortoise trade.  In South Africa, the TC has partnered with the Cape Province wildlife agency Cape Nature and well-known turtle biologist Dr. Margaretha Hofmeyr on two projects related to the Critically Endangered Geometric Tortoise (Psammobates geometricus) and the little-known Karoo Padloper(Homopus boulengeri).

In the Carribean, the TC has partnered with entrepreneur and conservationist Sir Richard Branson to create additional captive assurance colonies for the endangered Madagascar Radiated Tortoise (Astrochelys radiata), the Burmese Star Tortoise (Geochelone platynota) and the Burmese Mountain Black Tortoise (Manouria emys phayrei), on Branson’s private Necker and Moskito Islands in the British Virgin Islands. Tortoises from the TC’s captive breeding colony, the Behler Chelonian Center, are being transferred to enclosures on this Caribbean island where environmental conditions closely mimic the tortoises’ natural habitat.
With the Durrell Wildlife Conservation Trust and Thai Professor and Veterinarian Dr. Nantarika Chansue, the TC completed an emergency rescue effort to provide proper care and management for a large confiscation of Critically Endangered Ploughshare Tortoises recovered by authorities in Bangkok during March 2013.
The Turtle Conservancy is a 501(c)3 organization dedicated to protecting the most endangered turtles and tortoises and their habitats worldwide. The Conservancy's Behler Chelonian Center is the premiere facility for breeding Critically Endangered turtles and tortoises in the United States. Since 2005 the Conservancy has combined this highly successful breeding program with conservation efforts in the wild.
Posted by Jon Downes at 2:25 PM No comments:

SquatchIt Bigfoot call device inventors respond to 10 million dollar Bigfoot bounty by upcoming Spike TV reality show with Sasquatch luring device offer to contestants. The inventors of SquatchIt are inviting contestants to use their Bigfoot luring device to bolster their chances of capturing proof of the existence of Sasquatch.
James Villepigue, co-inventor of SquatchIt, says, “We couldn’t be more excited about Spike TV's 10 Million Dollar Bigfoot Bounty reality show. This unprecedented $10,000,000.00 cash prize is the largest cash prize in television history. What’s so exciting about this news for us, is that we believe that our Bigfoot luring device, SquatchIt, can be the very tool that ultimately helps one of the shows contestants collect the necessary evidence needed to stake their claim to the 10 million dollar cash prize!”
Read on...
Posted by Jon Downes at 2:10 PM No comments:

THE GONZO BLOG DOO-DAH MAN HAS A SHOE FIXATION

Last night I stayed up late watching Ian Glasper's YouTube documentary about Anarchopunk. Like his book it is called 'The Day the Country Died', and I was pleasantly surprised at how good it was, and at how high the production values were. If you are even slightly into this stuff I sincerely recommend that you check it out. I also did interviews with Billy James, and with Merrell Fankhauser yesterday, and will be interviewing Jack Lancaster tonight. I am going to be getting the Gonzo magazine out early this week, but it's gonna be a good'un.

*  Jon Downes, the Editor of all these ventures (and several others) is an old hippy of 53 who - together with his orange cat (who is currently on sick leave in Staffordshire) and two very small kittens (one of whom is also orange) puts it all together from a converted potato shed in a tumbledown cottage deep in rural Devon which he shares with various fish, and sometimes a small Indian frog. He is ably assisted by his lovely wife Corinna, his bulldog/boxer Prudence, his elderly mother-in-law, and a motley collection of social malcontents. Plus.. did we mention the orange cat?
Posted by Jon Downes at 2:06 PM No comments:

On this day in 1969 Apollo 11 splashed down in the Pacific Ocean after having taken me to the Moon and back for the first time (or not if you're one of those folks who think it was all filmed in a studio).
And now the news: