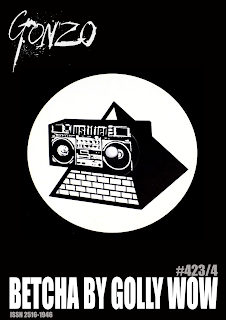 The worldwide mystery cat phenomenon (or group of phenomena, if we are to be more accurate) is not JUST about cryptozoology. At its most basic level it is about the relationship between our species and various species of larger cat. That is why sometimes you will stories here that appear to have nothing to do with cryptozoology but have everything to do with human/big cat interaction. As committed Forteans, we believe that until we understand the nature of these interactions, we have no hope of understanding the truth that we are seeking.
Posted by Liv McCarthy at 10:46 AM No comments:

http://www.gonzomultimedia.co.uk/about.html
Many thanks to all of you who were so kind to me yesterday. Please forgive me for having bellyached on at you. I was feeling massively sorry for myself, and it is one of the worst things about being bipolar that when one gets into a state like that, one thinks one will never recover. But eventually one always does.
Corinna always used to talk about Mercury being in retrograde. It’s not something I know much about, and I certainly don’t know whether I believe in it or not, but – just now – I decided to check whether Mercury was in retrograde now. Sadly for my positivity about the year ahead, retrograde doesn’t start until the end of the month. Me being a pain in the arse yesterday was simply just that, and I cannot blame my low mood on any heavenly machinations.
And the latest OTT:
https://www.youtube.com/watch?v=4MelKsCiDR8&ab_channel=CFZtv
ALL TODAY'S GONZO NEWS WOT'S FIT TO SQUINT
https://gonzo-multimedia.blogspot.com/.../hawkwind...
Hawkwind Interview - April 4th 1995 Toronto, Canada
https://gonzo-multimedia.blogspot.com/.../mark-lewisohn...
MARK LEWISOHN - In conversation with Cockcroft &amp; C...
https://gonzo-multimedia.blogspot.com/.../zappathings.html
ZAPPATHINGS
https://gonzo-multimedia.blogspot.com/.../gonzo-track-of...
GONZO TRACK OF THE DAY: Elaine Paige, Barbara Dick...
https://gonzo-multimedia.blogspot.com/.../thom-world-poet...
THOM THE WORLD POET: The Daily Poem
AND OTHER STUFF FEATURING VARIOUS GONZO CONTRIBUTORS:
Our webTV show:
https://www.facebook.com/OnTheTrack/posts/632561497117057
And if you fancy supporting it on Patreon:
https://www.patreon.com/CFZ
And by the way chaps and chappesses, a trip to the Jon Downes megastore may seem to be in order:
https://gonzotesting.blogspot.com/.../a-notion-of...
Meanwhile I continue to pretend that I am a popstar, because now I have sold eleven whole copies of my new album Coldharbour. If I continue at this rate I will get a silver disc sometime at the beginning of the next millenium. Coldharbour, by the way, can be found here: https://jondownes1.bandcamp.com/releases
I think it is really rather good, but then again I would say that wouldn't I?
AND THE LATEST ISSUE OF THE GONZO MAGAZINE:
Gonzo Weekly #421/2
THE CHRISTMAS ISSUE
www.gonzoweekly.com
This magazine continues to go off on strange tangents that I never expect, but I am very happy to see it do so. What is in this week? Ooooh lots of things. Such as Rick Wakeman, lotsa Covidstuff, Alejandro Jodorowsky, Jon's 2020 Top Ten, The Crown, and oodles more...
And there are radio shows from Mack Maloney and Friday Night Progressive, AND Merrell Fankhauser, and the Real Music Club, AND Strange Fruit, and Mr Biffo, there is a column from Kev Rowland, and C.J Stone, but Mr Biffo, Tony Klinger and Neil Nixon, are on hiatus. There is also a collection of more news, reviews, views, interviews and dibblers who have got the blues (OK, nothing to do with tiny marsupials who are listening to the new Bob Dylan album, but I got carried away with things that rhymed with OOOOS) than you can shake a stick at. And the best part is IT's ABSOLUTELY FREE!!!
..And the last few issues are:
Issue 419-20 (John Lennon)
https://www.flipsnack.com/9FE5CEE9E8C/gonzo-419-20-pb.html
Issue 417-8 (gIG)
https://www.flipsnack.com/9FE5CEE9E8C/gonzo-417-8.html
Issue 415-16 (Phideaux)
https://www.flipsnack.com/9FE5CEE9E8C/gonzo-415-16.html
Issue 413-14 (Rick Wakeman)
https://www.flipsnack.com/9FE5CEE9E8C/gonzo-413-14.html
Issue 411-12 (Extinction Rebellion)
https://www.flipsnack.com/9FE5CEE9E8C/gonzo-4011-12.html
Issue 409-10 (Covid)
All issues from #70 can be downloaded at www.gonzoweekly.com if you prefer. If you have problems downloading, just email me and I will add you to the Gonzo Weekly dropbox. The first 69 issues are archived there as well. Information is power chaps, we have to share it!
You can download the magazine in pdf form HERE:
http://www.gonzoweekly.com/pdf/
SPECIAL NOTICE: If you, too, want to unleash the power of your inner rock journalist, and want to join a rapidly growing band of likewise minded weirdos please email me at jon@eclipse.co.uk The more the merrier really.
* The Gonzo Daily is a two way process. If you have any news or want to write for us, please contact me at jon@eclipse.co.uk. If you are an artist and want to showcase your work, or even just say hello please write to me at gonzo@cfz.org.uk. Please copy, paste and spread the word about this magazine as widely as possible. We need people to read us in order to grow, and as soon as it is viable we shall be invading more traditional magaziney areas. Join in the fun, spread the word, and maybe if we all chant loud enough we CAN stop it raining. See you tomorrow...
* The Gonzo Daily is - as the name implies - a daily online magazine (mostly) about artists connected to the Gonzo Multimedia group of companies. But it also has other stuff as and when the editor feels like it. The same team also do a weekly newsletter called - imaginatively - The Gonzo Weekly. Find out about it at this link: www.gonzo-multimedia.blogspot.co.uk
* We should probably mention here, that some of our posts are links to things we have found on the internet that we think are of interest. We are not responsible for spelling or factual errors in other people's websites. Honest guv!
* Jon Downes, the Editor of all these ventures (and several others) is a recently widowed old hippy of 61 who - together with a Jack Russell called Archie, an infantile orange cat named after a song by Frank Zappa, three other cats, one totally coincidentally named after one of the Manson Family, purely because she squeaks, puts it all together from a converted potato shed in a tumbledown cottage deep in rural Devon which he shares with various fish. He is ably assisted by a motley collection of social malcontents. Plus.. did we mention Archie and the Cats?
Posted by Jon Downes at 3:30 AM No comments:

ON THIS DAY IN - 1642 - Astronomer Galileo Galilei died in Arcetri, Italy.