Posted by Jon Downes at 3:03 PM No comments:

Carl Marshall, CFZ correspondent, and myself have been looking at Ursidae mysteries including odd behaviour and colouration, for my Flying Snake magazine issue 10  .See Carl P. Marshall  `Unexpected Ursidae A Selection of Crypto Bears , hybrids and behaviour`  I have found some more stories in the last few weeks since Flying Snake was published at the end of March 2016. However just to mention first that one of these anomalous bears which featured on Web sites in 2015 and had a blue head, as if the head had been dipped in blue paint! It was photographed (or Photo Shopped?!) in . Other odd coloured bears include pink ones (oh yes!) .For example:

"An extraordinarily large polar bear, the fur of which is a bright pink colour, has been captured in . The animal will be sent as a present to the Czar." April 20th 1891.Repository,. Also in The Telegraph  July  7th 1931 : “Himalayan hunter reports seeing a pink bear. However it may have been an ordinary bear tickled pink at the thought he doesn`t have to put anything to go out of doors these hot days.”

I posted these two stories on the Fortean Times Forum Message Board on April  26th and the same day someone calling her/himself EnolaGaia replied thus: “Even though polar bears look white, their hair is really made of clear, hollow tubes filled with air. Scarring or residue on the fur can cause the “white” fur to appear to human eyes as cream colored, yellow, or even pink in the Arctic light”.

EnolaGaia also pointed out that the most common fur dis-colouration was green due to algae (and I once saw a  green “Peppermint Pup” in Middlesborough but that ,as they say,is another story) 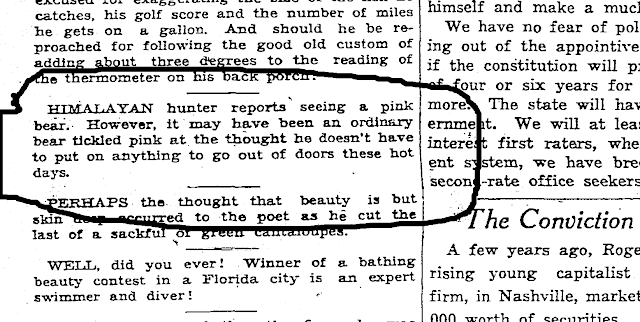 I found a  story by Dickens called `Too Much Blue` in the American and Commercial Daily Advertiser (, ) of August 9th 1852 in which a Green Bear at is mentioned but this could of course be total fiction. The pub or inn I mean ,if that`s what The Green Bear was.

Concerning green bears, The State Times Advocate (Baton Rouge, Louisiana) of September 15th 1971 reported that Jacksonville Zoo in Florida had  a green-tinged bear but it wasn`t able to look after it properly because the zoo was so dilapidated.

A blue bear turned up in according to The Oregonian of October 14th 1963 and  supposedly  “the genes that produce this freak colour are found only in a few bears in the Yakutat - Glacier Bay area of .”

WWMT-TV
The creature, known as Bigfoot, has made a big impression all over the country and right here in Michigan. Phil Shaw says he'll never forget when he ...
Posted by Jon Downes at 5:00 AM No comments:

ON THIS DAY IN -  1855 - Macon B. Allen became the first African American to be admitted to the Bar in Massachusetts.
And now some more recent news from the CFZ Newsdesk