Graeme Stroud photographed this beastie in Kent this weekend. Is it a partial albino or has it just shed its skin? Thank you Graeme for letting us reproduce the pic..
Posted by Jon Downes at 2:43 PM No comments: 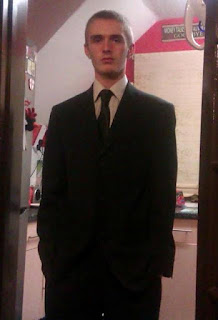 
* Jon Downes, the Editor of all these ventures (and several others) is an old hippy of 55 who - together with an infantile orange cat named after a song by Frank Zappa puts it all together from a converted potato shed in a tumbledown cottage deep in rural Devon which he shares with various fish, and sometimes a small Indian frog. He is ably assisted by his lovely wife Corinna, his bulldog/boxer Prudence, his elderly mother-in-law, and a motley collection of social malcontents. Plus.. did we mention the infantile orange cat?
Posted by Jon Downes at 2:00 PM No comments:

Found Him! Watch in Horror as Bigfoot Hunters Pass Off a Human Corpse as a Sasquatch

Week In Weird
Today I watched Bigfoot hunters post pictures of a dead guy on Facebook and say it was Sasquatch. Witness the most surreal experience I've ever

Check Out This Knuckle Print Video Mike Brookreson Sent Us
Bigfoot Evidence
These prints were allegedly discovered by Rick Tullos on Mike Brookreson's property. Whatever is living on Mike's property, it's gotta be one of the
Posted by Jon Downes at 1:53 PM No comments:

ON THIS DAY IN 0452 - Italy was invaded by Attila the Hun.
And now some more recent news from the CFZ Newsdesk