KARA WADHAM ON THE WW 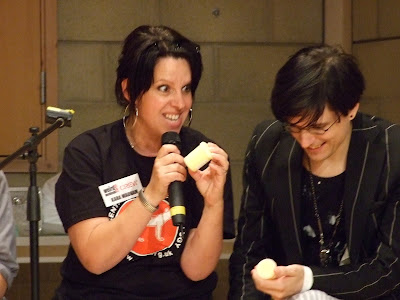 Picture the scene - a starry-lit field, the wind blowing in the tress, the whirr of the windmill, and snuggling down in your sleeping bag, to be awakened suddenly by a low seismic rumble crescendoing to untold decibels from the tent next door. Undoubtedly, sleeping at the Weird Weekend was quite an experience, but the real experience came from the thrill of the lectures. People ask me, what exactly do you do at the Weird Weekend? Indeed my very staid mother-in-law enquired whether perhaps we had gone to the dark side and it was a weekend of occultism?

The Weekend is difficult to describe without, how can I put it, sounding weird to those that have not been. But for me, it is a chance to stimulate my brain in a way that mainstream life cannot. It is a chance to explore other people's beliefs, perspectives and standpoints and it is the unleashing of excitement at the thought that there is so much more to this universe than we can comprehend. If we all took time to reflect and listen on a regular basis to those ideas that are 'out there' and still unproven, I believe it would allow people to stop worrying about the pettiness and materialism, which has dominated our lives, and to appreciate what is truly important - an appreciation of what we already have, and the tantalising ideas of what is to come.

In my career I am surrounded by young people who have been so indoctrinated by our culture that their greatest ambition is to 'be famous.' At the Weird Weekend, I met amazing people who were intelligent, eloquent and well respected - what's wrong with that as an ambition? We are so closed down by what we think we should be doing, that we forget to look at what is already happening - in our communities, in our families and in the natural world. The Weird Weekend had it all: stories of men and women searching for unusual animals, the possibility of extra terrestrial life, treacle mines, whistling spiders and the confirmation that there is a big cat sidling around Devon, proving that a lot of our science fiction is, in fact, immersed in science fact.

The real stars of the weekend were the speakers who had prepared such thought provoking talks that by Saturday night, I was mentally saturated. Obviously, this is the main reason that I could not answer many of the quiz questions, that and the desire not to show up the rest of the guys competing. I am very kind like that.

Jon said to me over the weekend, 'I am not going to dumb down the Weird Weekend’, and to that I say 'Hoorah!’
Don't ever dumb it down, to do that it would lose its integrity and professionalism.

And besides, with me attending, I think you have enough of a dumb quotient!
Posted by Jon Downes at 12:45 PM No comments: 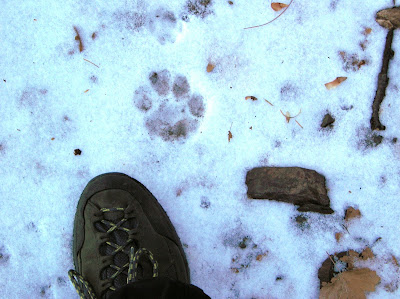 Love the cryptolist. I found the picture of the track allegedly left by the Durham Puma, and that is most certainly not a puma/cougar/mountain lion track. That track was made by a canid. I've attached a photo of a cougar track that I took in the Santa Catalina Mountains just north of Tucson, Arizona. This track looks to have been made by a young, small-ish cougar of about 80 lbs. It was very fresh, and followed a bunch of turkey tracks. Cougar tracks are more round than dog tracks, and cougar tracks NEVER show claw marks. Cougars need to keep their claws very sharp to help them climb trees and subdue prey. Be Good!

Jim Lyding
Posted by Jon Downes at 12:23 PM No comments:

THE LEOPARD HAIRS FROM HUDDISFORD WOODS 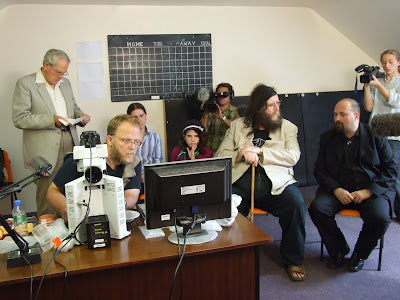 On Friday morning, in front of a number of witnesses and a Danish TV crew, Lars Thomas - a Danish scientist with a high reputation - analysed a number of black hairs on brambles and thorns at Huddisford Woods. Some of these hairs were found by him, and some by Andrew Perry, Nadia Novali and their friends.

The CFZ have been actively studying the big cat reports from this area since 2005, and for the last 18 months have been making a feature-length film there.

Max and I drove the team to Huddisford Woods on Friday and showed them three of the places that the big cats have been seen. We did not tell them specific 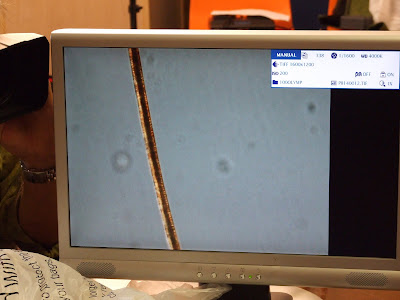 ally where to look and the Danish TV crew will, I am sure, corroborate this.

After microscopic analysis, and comparison with known leopard hairs, Lars identified the hairs found in the woods as being from a leopard. The analysis was carried out in front of representatives of the CFZ (including president Colonel John Blashford-Snell), and was filmed both by CFZtv and the aforementioned Danish TV crew.

The video of the examination will be released as soon as we have time to digitise it (probably in a few days). Conspiracy theorists will no doubt claim that we will use this time to somehow doctor the results. This is just not true: the examination was filmed on our Sony PD150 and we have to digitise the DV Tapes which has to be done in real time, and we just have not had the time to do it.

Lars Thomas is not just an old friend of the CFZ, but he has been a core member since 1994. Several other people in the party that found the hairs are also CFZ members. The CFZ have therefore proved that there are big cats living wild in this country. However, in view of recent events we would like these findings corroborated. We have 25-30 of these hairs, and will make them available to anyone who has the resources and expertise to test them, including - if they wish to participate - the Big Cats in Britain research group, who have made no secret of their animosity towards us.

There are two provisos:

1. That the results (including any reports, films or photographs) are immediately put into the public domain
2. That the hairs are returned intact to the CFZ

WEIRD WEEKEND 2010: The Speakers and Exhibitors (less Matthew Williams, Andy Roberts and the Colonel, who all left early) 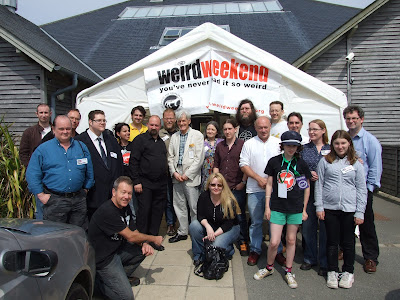 MEMO is an educational charity dedicated to building an ongoing memorial to extinct species.

The memorial will be a stone monument bearing the images of all the species of plants and animals known to have gone extinct in modern times. It will incorporate a bell to be tolled for all extinct species, including the great many ‘unknown’ species which it is believed perish each year unseen by scientists. The bell will be tolled on the International Day of Biodiversity on 22nd May each year.

In memory of Two Tone:

http://www.youtube.com/watch?v=anjT71N4PGM
Posted by Jon Downes at 11:25 AM No comments:

HAVE WE DONE THIS BEFORE?

In the Pacific there are around 4 dozen sea snakes that can be found; of them, only one has ever been reported in Hawaiian waters: the yellow-bellied sea snake (Pelamis platurus). This is the only open-ocean marine snake. Even though it does occur here naturally, it is by no means common. In fact, you'll likely never see one. Only 20 specimens have been documented. Marine sea snakes are very poisonous. They are distantly related to cobras. But as far as venomous snakes go, these guys are very timid and rarely bite people. I have swum with sea snakes on several occasions in the south pacific and even played with them. They don't want to bite you if they can help it.

Something is wrong here

Email ThisBlogThis!Share to TwitterShare to FacebookShare to Pinterest
Labels: snakes 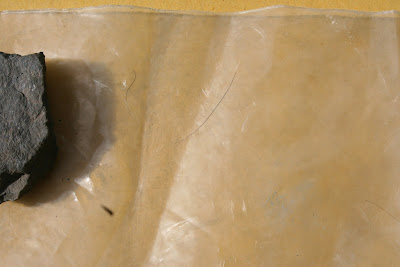 You will be hearing properly from us in the next day or two. However, to put it in a nutshell: the 2009 expedition from Sumatra did bring back hairs, and Lars Thomas and his team in Copenhagen have identified them as being substantially reminiscent of an orangutan. The nearest populations of orangutans live several hundred miles away. At the very least this would suggest that we have discovered a new population of one of the world's rarest animals. At the very best...use your imagination.
Posted by Jon Downes at 2:54 AM 1 comment:

Corinna looks back at the Weird Weekend, introduces a new member of the family, and generally muses on stuff. (Warning: Contains bloody big batrachian)
Posted by Jon Downes at 2:50 AM No comments:

WEIRD WEEKEND 2010: In which the children of the village pretend to be Edgar Broughton

Posted by Jon Downes at 2:49 AM No comments: 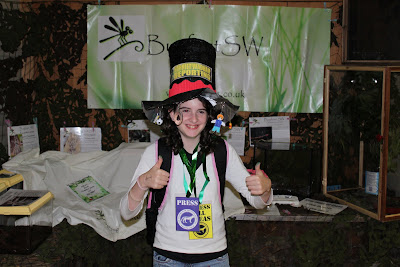 Part one
Well, it was a long trip and I had jelly legs by the time we got there, but it was all worth it! Listening to lectures, interviewing speakers and helping hand out the raffle prizes (wearing, of course, my amazing hat) was just the beginning of the Weird Weekend fun. Over the next couple of weeks I will be continually posting my blogs so keep a look-out!!

Posted by Jon Downes at 2:37 AM No comments:

On this day in 1930 Poet Laureate and writer of the classic children’s story The Iron Man was born.

Another related video; see if you can guess the link between this and the last story (not too difficult today):

http://www.youtube.com/watch?v=X7ppvVsELog
Posted by Jon Downes at 2:36 AM No comments: