THE GONZO BLOG DOO-DAH MAN IS QUITE HAPPY


* Jon Downes, the Editor of all these ventures (and several others) is an old hippy of 58 who - together with a Jack Russell called Archie, an infantile orange cat named after a song by Frank Zappa, and two half grown kittens, one totally coincidentally named after one of the Manson Family, purely because she squeaks, puts it all together from a converted potato shed in a tumbledown cottage deep in rural Devon which he shares with various fish. He is ably assisted by his lovely wife Corinna, his bulldog/boxer Prudence, his elderly mother-in-law, and a motley collection of social malcontents. Plus.. did we mention Archie and the Cats?
Posted by Jon Downes at 12:36 PM No comments:

A word about cryptolinks: we are not responsible for the content of cryptolinks, which are merely links to outside articles that we think are interesting (sometimes for the wrong reasons), usually posted up without any comment whatsoever from me.
MALAYSIA’S Tasik Chini is a poster-worthy example of the need to balance the pursuit of socio-economic development with environmental care and conservation.
Nine years ago this month, Unesco conferred World Biosphere Reserve status on Tasik Chini, in Pekan district, Pahang, underlining the lake’s rich biodiversity, including “species characteristic of the extreme lowlands ... of considerable conservation interest due to their diminishing low land habitats elsewhere within Peninsular Malaysia”.
Tasik Chini became the first site in the country to be given such prestigious international recognition under Unesco’s Man and the Biosphere Programme. The other is Crocker Range in Sabah, which received the same status in 2014.
A biosphere is a region of land, water and atmosphere where living organisms and the results of their activities create a single, self-sustaining ecosystem. Up to 2016, there were 669 biosphere reserves in 120 countries.
Tasik Chini is formed from a string of 12 connected water bodies covering over 200 hectares, surrounded by 700 hectares of freshwater swamp and swamp forest.
Usually between August and September, the lake is transformed into a floating garden with thousands of white and pink lotus flowers covering the surface. These iconic lotus plants (Nelumbo nucifera) and fishing are the main ecotourist attractions.
The lake is endowed with a rich diversity of flora and fauna — home to 87 species of freshwater fish, 189 species of birds, 51 low forest species, 15 freshwater swamp forest species, and 25 aquatic plants.
Studies have shown that many habitats are endemic or unique to Tasik Chini.
About 800 Orang Asli from the Jakun tribe, and also some Semai, live on its shores, and they depend on the lake for livelihood and water supply.
For Tasik Chini, the Unesco recognition is already special enough. But the fabled lake has more. Among the famous myths and Orang Asli legends, the lake is home to a dragon, the Naga Seri Gumum (Malaysia’s answer to Scotland’s Loch Ness Monster.) As well, an ancient Khmer city is said to rest at the bottom of the lake.

Naples Daily News
Dave Shealy has devoted his life to studying the elusive skunk ape — the Florida Everglades' version of Bigfoot. He and his brother, Jack, own the ...
Posted by Jon Downes at 4:30 AM No comments:

Footage captured the moment what appears to be a sea creature pokes out of the water in a canal in Gloucester.
Josh Hawkins, 25, who filmed the Nessie-like object yesterday, said: "I was watching the FA Cup final and I looked out the window and saw it.
"It looked like it was moving.
“I thought it looked like the Loch Ness monster." 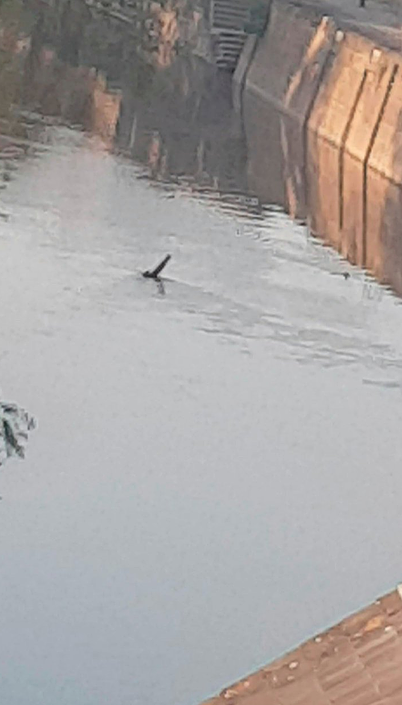 SWNS
NESIE? An IT worker claims he saw the Loch Ness Monster – 500 miles from home
Legends around Loch Ness claim that the great lake contains a huge monster.
Many videos and photos have surfaced of the monster throughout the years, without any concrete sightings.
The IT worker called his friends over to see if they could identify the mysterious creature.
Josh added: "We were asking each other what we thought it could be.
Posted by Jon Downes at 4:30 AM No comments:

CHARLOTTE ON THE HOLSWORTHY MARK SHOW

ON THIS DAY IN -  1471 - King Henry VI was killed in the tower of London. Edward IV took the throne.
And now some more recent news from the CFZ Newsdesk