A thought provoking and honest article from Hayley Stevens... 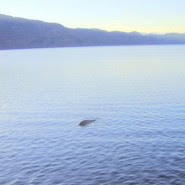 It was March, and as we walked along the shore of the lake in Bowness I was telling Joe Nickell about the most popular theories about what had caused the ‘monster’ photographed by Tom Pickles and Sarah Harrington. I told him that most people believed it was a tyre, or a bunch of tyres tied together and floating in the water and how, days after the photo hit the newspapers, a sliced up tyre was found on the shore of the lake.

Joe asked ‘does a tyre float upright when sliced up?’ and the answer was of course ‘I don’t know, nobody has tested it’. He then gave me that look, the look that says ‘I know you already know the answer to this so I’m not going to patronise you’. So many people had speculated about the cause of the Pickles photo without taking the time to ask the right questions or to speak to the people involved, myself included. Most people concluded it was a tyre in the lake but nobody had checked to see if it was possible for a tyre to look like that. We were making a claim but not providing the evidence to back it up.

It is a beautiful day. I have a Weird Weekend meeting at 2:00 (which reminds me. If you have still not made up your mind whether to come to this year's event, go to www.weirdweekend.org and your mind will be made up for you). I am also expecting a visit from Davey Curtis (who will be familiar to all bloggoreaders) and his family. And finally congratulations to Tim and Graidi Taylor-Rose. Dougal Robert Taylor-Rose arrived in the world at 15.04 on 10th August, weighing a very healthy 7lbs 11oz!I am now an adopted Great-Uncle...

It has been a while since we featured Mimi Page on Gonzo Daily, and I'm not quite sure why. Her album is a perennial fixture on the office hi-fi, and even my delightful (if slightly scary) step-daughter Olivia likes it. But, better late than never. Today we feature a smashing download of a remix of one of the songs from her first EP (Mimi's, I mean, not Olivia's)...
http://gonzo-multimedia.blogspot.com/2012/08/mimi-page-tomorrow-download.html

I really am getting back into Annie Haslam, both solo and with Renaissance. I hadn't listened to either for years, but purely through the happenstance of fixing the spelling on her Gonzo Artist Page, I have started to listen to her for the first time in about 20 years or so. She really is a fantastic artist, and I have become a born again Haslam proselytiser. Today we feature a link to another insightful interview with the lady herself..
http://gonzo-multimedia.blogspot.com/2012/08/link-annie-haslam-interview.html

Having checked them out on YouTube, I so want to see Asia Featuring John Payne live. They look a fantastic band. Today we have news of a forthcoming Mexican festival appearance. I was in Mexico with a UK Channel 4 film crew some years ago, and I would love to go back.
http://gonzo-multimedia.blogspot.com/2012/08/asia-featuring-john-payne-mexico.html

The juggernaut which is the Michael Des Barres publicity machine trundles on, and I am reliably informed that on tuesday fortnight he will officially become the most famous person on the planet, and will be given the title of Emperor of the Galaxy. Today we showcase another fascinating interview with him - I am amazed that he does so many interviews and always manages to say something fresh and interesting...
http://gonzo-multimedia.blogspot.com/2012/08/fireworks-for-michael-des-barres.html

Rick Wakeman makes another charity appearance; he was at Age UK Gloucestershire presenting a cheque for £400 from Tesco Retired Staff. He really is a nice chap, and totally overturns the popular conception of rock stars as selfish and egomaniac. Well done Rick.
http://gonzo-multimedia.blogspot.com/2012/08/rick-wakeman-really-is-is-jolly-nice.html

I still think that Peter McAdam is probably the funniest person with whom I have had the privelige of working. His book 'The 9 Henrys' is massively entertaining. Here we are proud to present an interview with the man himself...
http://gonzo-multimedia.blogspot.com/2012/08/peter-mcadam-and-9-henrys-in-press.html

And that's it for today. I will be back tomorrow, and - seven whole days having passed - I shall be presenting it in bad poetry. Ta-ra!
Posted by Jon Downes at 2:25 PM No comments:

On this day in 1941 Wi-Fi was patented by the actress Hedy Lamarr.

The following video testimony comes from a family that had went camping deep in the Washington mountains and encountered a large bipedal creature. The woman in the video explains her encounter with the strange creature believed to be Bigfoot. From her testimony, she describes the creature 10-11 feet tall with a multicolor coat.

Email ThisBlogThis!Share to TwitterShare to FacebookShare to Pinterest
Labels: sasquatch

IS THIS A PHOTOGRAPH OF A NORWEGIAN LAKE MONSTER?

THE WATER: Andreas Solvik and his two companions took this picture on the way home from the volunteers on Wednesday evening. Solvik believe the explanation is the sea serpent, while biologist Peter Buckman at the Natural History Museum denies this. Photo: Andreas Solvik

Many thanks to Peter Thain for sending this story.
Posted by Jon Downes at 11:25 AM No comments:

Americans love to talk about “their” version of the Loch Ness Monster. “Champ”, however, holds dual citizenship; Lake Champlain is a 125-mile (201 km)-long lake that is shared by New York, Vermont and Quebec, Canada. Read on...
Posted by Jon Downes at 11:22 AM No comments:

From Nick Redfern's World of Whatever:
From CFZ New Zealand:
From CFZ Canada: